What are the features of Spanish and Latin American poetry 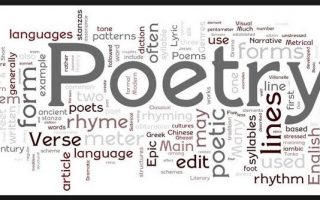 The poetry consisted of written and oral literature in different Latin American languages.

Name some of Spanish, Portuguese and Latin-American Masters.

If you were to name two poets from the second half of the twentieth century who may rise beyond grandmaster level to the level of a touchstone poet whose impact will endure across many centuries, who would they be and why?

Preferred two poets who may rise beyond grandmaster level are; Nobel Laureate and Pablo Neruda both from Chile. These two poets provided a model that often expressed love and political commitment. They also distinguished critic and essayist.

How would you rate the second half of the twentieth century, when comparing it with several other 50-year periods in English poetry? Where does it stand overall?

I will give the poets 6 out of 10 ratings when compared to other poets in other 50-year period. These poets did a great work of literature where they wrote memorable and original poems. The poets produced master works in plastics, painting and arts. Their poetry was aimed at a smaller, more sophisticated and receptive audience.

What has happened to the substance of poetry in the second half of the 20th century?

During the 2nd half of the 20th century, there was occurrence of the boom. Various writers tended to change the content of their work. The common features of their literature were the adoption of the modern European and American novel. This new techniques and styles gave this literature work a new poetic aura.

What role has the singer-songwriter and the performance poet played in the first two generations?

Singer-songwriter mainly played entertainment and education roles in the past generation. A singer used his singing talent to educate his/her listeners at the same time entertaining them. A simple song can make the listener change his/her ways.

What Poets do you feel best held up the quality of craft, scope and voice represented in fixed forms in 2nd half of the 20th century

On my opinion, the two poets were Pablo Neruda of Chile and Octavio paz of Mexico. These two writers received a Nobel peace prize in the beginning of modernism on their great poetic work during this period. The two poets were the premier poets of this period, though Jorgu Luis Borges and Jose Lezama were also recognized.

I mostly like Juan Rulfo of Mexico due to his great works, and less prefer James Joyce. If we compare the works of these two writers, The Mexican Juan Rulfo was a transitional figure in the field of literature, He produced quality work including the plain in flames, English version and his novel Pedro Palamo.

Of all the poets from the second half of the 20th century, name three British grandmaster poets whose work you feel is special and why. Include if you can at least one that has not yet been mentioned at length or at all in this questionnaire.

The great British poets included; Sacvan Bercovitch and Cyrus R.K .Patell.These two writers did great works i.e. the known Cambridge history of American literature. They wanted to observe closely to what occurred in America. Another great British writer was the Aneirin Y Gododdin his great works included the glossary and bibliography.

Of all the poets from the second half of the 20th century, name three American grandmaster poets whose work you feel is special and why. Include if you can atleast one that has not yet been mentioned at length or at all in this questionnaire.

Just to mention a few of the special American poets who did great work during this time, David Jennes and Don Velsey did a great work in poetry during the “Age of melancholy” They used their work to explain various social predicaments and disputed points among people. Another great American poet during this period was the Michael Klein.

Excepting the quality of their work, but rather looking to them as people, which man or woman of the second half of the 20th century is the most laudable to you, and why; then, which would you consider the opposite of laudable and why?

My recognition goes to Chilean woman by the name Isabel Allende. Despite the quality of her work, I prefer Isabel because she stood and rise as a woman despite the male writers dominating the poetry industry during the period. Argentine Luisa Valenzuela would be less laudable to me, though she was also successful, not at home but abroad.

Over this entire period, which poet do you personally identify with the most, based either on his life, his work or both?

My identification goes to Octavio Paz.  In his writing life,Paz was possessed by putting the past to appear into present.Paz had a classical mind where he argued that; the present repeats the past and what seems to be obsolete context reappear in new context.

After having read Earnest Hilbert’s detailed pro-and- con essay on Billy Collins, how does one explain the singular rise of Collins within the poetry scene of the past dozen years?

Billy Collins could only be compared to pinsky; the rise of Collins can be attributed to the methods he has used to reach out to his audience. His poems have been animated and the animations have been watched on YouTube even broadcasted on televisions. He also performs his poems in public and even radio stations.

What do you like about the poet’s and his work?

What I like about Collins work is how he has been able to identify poem as a solitary activity. Collins work also has a larger audience ranging from the public; those watching televisions and radio listners.His books are on high demand because he has severally staged live performance.

What do you dislike about the poet his work?

The work of Collins has generally been good except but a few situations that have undermined his work and career. Collins has a few critics and lack of adequate honor from literature organization. Despite his work being in the televisions and radio stations, he forgets that he should put his work in the newspapers too.

Has Collins’s celebrity and poetic style been good for contemporary poetry, bad for it, or in some ways, been both?

I can agree that Collins poetic style has been good for contemporary poetry. From the previous answer, we realize that Collins has been able to broadcast his work live on televisions, radios and even YouTube. All these makes his works reach a larger audience because he uses the modern methods to reach out to his audience.

After reading Dana Gioia’s essay, can poetry matter? What is your own opinion of poetry’s current state with regarding its relevant to the public?

In one of her famous essay known as “Disappearing ink”, Dana pointed out some issues on current state of poetry. She claims that Poets nowadays reach many people through their performance in persons by broadcast in YouTube, television and radio stations rather than they used to do it only in prints and books. My opinion is that, other poets should follow the footsteps of likes of Collins to broadcast their work so as to reach a larger audience.

What is your opinion of the current state of MFA programs? Are they worthwhile today?

The MFA programs are worthwhile today, since we need many poets who can reach the current generation through various poems and essays. And MFA is the only program that can make all these be realized. Through MFA programs, great poets can pass knowledge to the coming generation so as to carry on with the poetry work.

What can local groups and state associations do to foster increased acknowledgement of poetry’s importance to the public, and to help individual poets progress.

Local groups and state can help individual poets progress simply by acknowledging them and their work. They can acknowledge their work by awarding the best writers; help the writer form their own organizations and associations. State and local groups should also facilitate live broadcast of poetry work on national televisions so as to convince the public on the importance of poetry.

If you could compose an ideal scene for poetry to reach over the ten years, what will it be, and how will we get there.

To compose an ideal scene of poetry that will reach up to ten years, one need to evaluate what will the audience like coming these ten years and who will be the audience. For instance I can use a political or an economic scene because they will always exist and trend in the society.