This essay compares and contrasts life in the city with life on a farm. Both lifestyles have their similarities and differences that have remained more or less constant over time with minor adjustments here and there depending on the time of change. As the world has progressed through time and technology, people all over the world have experienced a general shift of the concentration of masses from the countryside on farms to the hustling and bustling environment of cities. The shift in the trend towards urban life has come hand in hand with the spread of modernisation and globalization. That said, each lifestyle comes with its won set of grievances and its own set of benefits and that none of the two can be seen in an absolutely negative or an absolutely positive light.

Living on a farm entails a life that is generally thought of as simple and trouble free. In romanticized writing, living on a farm is characterized by fresh air, green grass and sunny, happy days of trouble free life. Though these facets of farm life aren’t entirely wrong, they do not portray the complete scenario. Some of the upfront advantages include the lack of pollution. Since there is no industrial area or traffic nearby the atmosphere is free of pollutants which make the air dirty and cause acid rain. Life on a farm is also quieter and thus more peaceful; there is no traffic, no loud neighbors and no police sirens at odd hours of the night. Farm life is also considerably safer and more secure; since the area is sparsely populated there is lesser chance of being mugged outside of the house or being robbed inside of it. The rate of crimes apart from robberies and muggings is also very low. Farm life is not driven by a mad, materialistic rush and instead the lifestyle adjusts to the pace of the people who are living it. 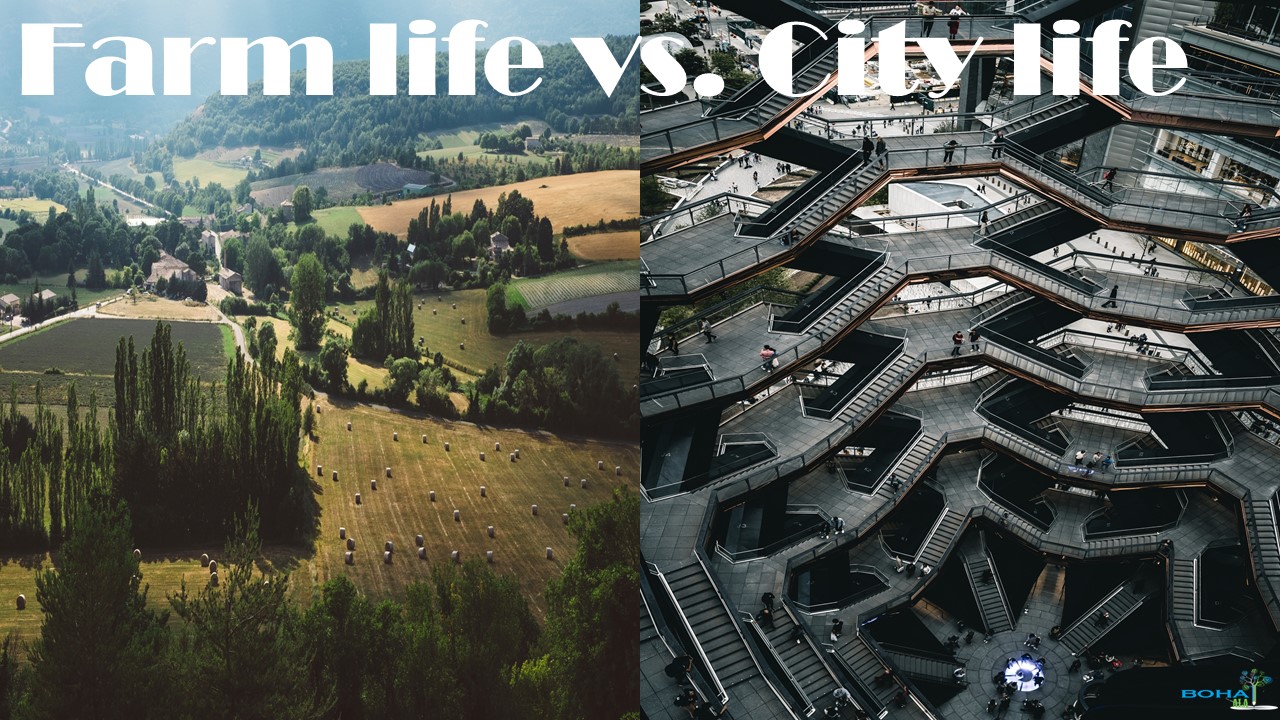 However, life on a farm is by no means rosy. Farm animals are not easy to take care of. They have to be fed, cleaned and inspected. They also have to be cleaned up after which makes for a lot of work. Farming activities require extensive physical labor which can be very tiring and can quickly get repetitive and tedious. Moreover, if you get tired of this work there is no shifting in duties that you can be assigned. This work is self subsisting for the most part and if the people who are living on the farm refuse to do it, it becomes very difficult for the farm to function. Furthermore, farming is hugely reliant on the weather and if not allowed sufficient favorable weather conditions farming activities, mainly crops suffer a great deal and can sometimes be completely destroyed. Hence there is always risk that the farm produce may not be as expected if the weather is not favorable. Another drawback is that with the introduction of new farming technology and machinery, farm life has become highly mechanized and most human labor on farms has become redundant and finds it difficult to find on farm employment.

Urban life is very different, as opposed to farm life. But there are still some aspects in which both are similar. City life is often characterized by a hasty, materialistic life where man is slave to capitalist whims and materialistic demands. The pace of lifestyle has to be adjusted by the people to the pace of the city. Life in the city is always late to meet a deadline. Being in close proximity to traffic and industrial zones, city life has high levels of pollution from toxic gases and noise. High levels of pollution make acid rain in cities a common occurrence, along with other factors like smog. Pollution also contributes to various kinds of diseases for the people who are living in cities, like asthma, skin diseases and other respiratory diseases. City life is less safe and secure, the population density is high and there are all kinds of people in close proximity and thus the streets aren’t safe and neither are homes. Street muggings and various other kinds of robberies are high. So is the rate of other crimes like theft, murder, rape and kidnappings.

In spite of the dark side of life in the city, it is quite alluring and has for a long time attracted people towards itself. The shift in trend living in cites is not a baseless whim. Cities do indeed offer many benefits to their inhabitant’s lives. The most favorable of life in the city is the access to and variety of urban life amenities available. Furthermore, there are more places available for recreation and leisure, like restaurants, cinemas, shopping malls, spas etc. Furthermore, modern healthcare facilities are also available. City life is run by the service sector which has not yet been mechanized enough to make labor power redundant. Thus in cities there is a better chance of finding employment and better pay too. Also, employment in cities rarely depends hugely on the weather and thus changes in weather do not bring economic activities or daily life to a standing still, apart from situations of natural disaster/extreme weather.

In sum, both city life and farm life have their similarities and difference, pros and cons. But due to the availability of basic and modern, urban life amenities in cities and access to services like free health care and education along with better and more job opportunities and room for growth as an individual or as a business make city life a better alternative given a choice between city life and farm life. However on the other hand some people still do prefer living in the farm life due to the less hazardous circumstances of the life. The fact that farm life does not have hurdles and problems in comparison to city life, many people still settle down for it.

Pros and Cons of Shared Residence