Environmental and Strategic Analysis of Novartis

Novartis is one of the renowned pharmaceutical companies operating in the global market. The company’s 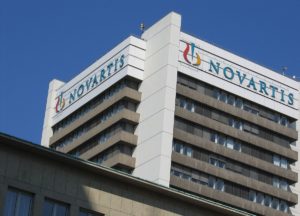 headquarters are in Switzerland. Novartis was established in 1996 following a merger between two Swiss companies, Sandoz and Ciba-Geigy. Prior to the merger, Ciba-Geigy was operating in the pharmaceutical industry while Sandoz concentrated more on the sale of chemicals. After the merger, however, Novartis expanded in the European, American and other markets rapidly. By 2015, it was one of the leading pharmaceutical companies in the global market. This report contains an analysis of the external and internal environments of Novartis using different frameworks.

A notable aspect of the markets where Novartis operates, including Europe, China, India and America, is that they have political stability. During the recent years however, Novartis and other firms in the pharmaceutical industry have been experiencing political pressure compelling them to reduce prices for their drug products. Thus, the political factors have a moderate impact on Novartis.

The economies of most of the markets where Novartis operates, such Western Europe and North America, are highly connected. In case of the emergence of an economic crisis, the company’s operations may be adversely affected. The operations of the company are supported by regional and bilateral trade agreements that reduce trade restrictions. Thus, the economic factors have a moderate effect.

Legal factors have a major impact on the firms operating in the pharmaceutical industry. Novartis needs to adhere to consumer laws, health and safety laws and employment laws established in the different regions where it operates. In addition, the company is required to adhere to additional regulations established in the target markets. In the US, for instance, the company is required to adhere strictly to the regulations established by the Food and Drugs Administration (FDA). Despite this, the laws and regulations are beneficial to well established companies such as Novartis since they help to minimize industry entry and to increase consumer confidence with drugs. Thus, the legal factors have a moderate effect.

Biotechnology has been improving due to continuous innovation facilitated by research and development, with contributions from Novartis and other firms in the same industry. Although the investment in the research and development is costly for the companies, it has been facilitating the development of quality drugs. Advancement in technologies such as the social media provides an opportunity for Novartis and other pharmaceutical companies to market themselves. In this regard, the technological factors are also moderate in their effect to Novartis.

The relevant social factors include demographics, health issues, aging trends and culture change. In most European countries and America, the population has been aging, implying that the demand for drugs has been increasing. The trend is expected to continue in the future. Also, the insurance kits available in such countries support the purchase of drugs. Novartis’ target markets such as China and India have a high population, implying that the demand for its drugs is also high. Thus, the social factors are favorable to the company.

In order to determine the nature of competitiveness in an industry, it is essential to answer several competitive forces questions. For instance, there is a need to answer the question; how easy is it for new firms to enter the industry? The Porter’s Five Forces model is the most suitable framework in answering the questions regarding competitive forces (Kotler & Keller, 2011). The model analyzes five factors that influence the attractiveness of an industry, namely threat from substitutes, nature of competitive rivalry, power of suppliers, threat of new entrants and power of buyers, as applied in the case of Novartis below.

The global pharmaceutical industry comprises of many firms. Some of them, such as Roche, Merck & Co. and Pfizer, are well established in the markets where Novartis operates. The ability to compete is highly influenced by the level of inattentiveness. Thus, competitive rivalry in the industry is high.

Novartis and other firms in the pharmaceutical industry rely on technologies and chemicals, among other inputs. The inputs used in the industry are available from many suppliers. As such, the suppliers have low ability to influence the pharmaceutical companies. In this regard, the power of the competitors is low.

The pharmaceutical companies operate under strict laws and regulations and their drugs are tested before approval. The risk of the drugs being rejected is high and can lead to the loss of a lot of money if not approved. Also, the firms need to invest significantly in research and development. Due to such issues, the threat of new entrants is low.

When a drug is patented, it does not have close substitutes. The alternatives can be other types of drugs and treatments available but not similar. Despite this, a lot of substitutes in the form of generic drugs emerge after the patent expires. In this regard, the threat of substitute to a drug can be medium or low, depending on whether or not it is patented.

The value chain of Novartis is represented by the image below: 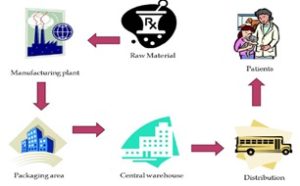 Novartis derives competitive advantage through the production of 20 categories of drugs, some of which are rarely manufactured by the competitors. Among others, the categories of drugs manufactured by the company are meant to address diabetes, oncology, pain, mental health, viral hepatitis, respiratory agents, HIV/Aids complications and ulcers. Also, the company manufactures the drugs in different regions, hence reducing transport and distribution costs. Importantly, Novartis derives its competitiveness from being innovative in the production of new drugs.

The distribution process for the drugs manufactured by Novartis also enhances its competitive advantage. The company has developed strong networks with different segments of consumers, the most remarkable being retailers, pharmacies, hospitals and clinics. The company’s manufacturing and distribution networks are presented in the diagram below:

The Manufacturing and Distribution channels of Novartis

Thus, Novartis can enhance its competitive advantage through improving the processes for acquiring raw materials, manufacturing, warehousing and distribution of its products.

A business model canvas is a layout of what a firm does and how it does it or plans to do. The layout describes an organization’s key resources, activities and stakeholders that can facilitate or facilitate profit earning and success. The canvas can also include in organization’s value positions and channels for distribution of products (Kotler & Armstrong, 2012). The figure below presents the business model canvas for Novartis. 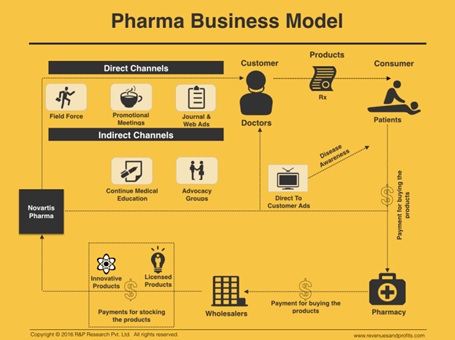 The key activities of Novartis include manufacturing and distribution of pharmaceutical drugs and other products and engagement in surgical activities. The key partners of the company are suppliers and customers. The company has strong close relationship with the customers. Novartis mainly sells its products through physical stores. The key resources of the company include its manufacturing facilities, financial resources, human resources and inventories.

VRIO is an acronym for value, rareness, immutability and organization. The purpose of the model is to evaluate a firm’s financial, material, non-material and human resources. The analysis helps to determine a firm’s weaknesses and competitive advantages (Kotler & Armstrong, 2012). The application of the model is represented in the following diagram: 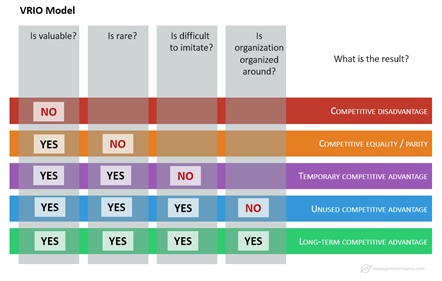 Overall, the global analysis of the market in which Novartis operates indicates that except social factors, the rest of the factors contained in the PESTEL model have a moderate impact on the company. The social factors have a favorable effect. Regarding industry’s competitive forces, the threat of new entrants and power of suppliers are low, competitive rivalry is high, power of buyers is medium and the treat of substitutes can be medium or low. The business analysis of the company indicates that it has an opportunity for improvement through targeting the key activities. The internal analysis indicates that some of the company’s resources equip it with temporary competitiveness while others have the same impact as in other pharmaceutical firms. Despite having a strong competitive position in the global market, the analysis suggests that the company should focus on utilizing the available opportunities and continue investing in research and development in order to reap from innovativeness and to remain competitive in the long-term.