Effects of Syrian Conflict on Turkey

Every decade, century or millennium in the history of mankind has been marked by human conflict. These conflicts 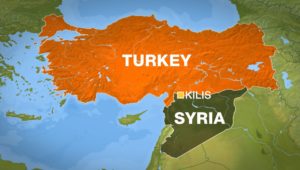 always vary in terms of magnitude, cause, as well as the severity of their results. It is worth noting, however, that the weapons used in the course of these conflicts have only aggravated the severity of the results thanks to technology. Conflicts may be within countries (otherwise known as civil wars) or between countries or regions. While the effects of civil wars may be more pronounced within the affected country’s boundaries, other countries neighboring it or within the region and the world at large often feel the ripple effects of the conflicts (Holliday 4). This is the case for Syrian conflict. While the Syrian conflict may have had positive and negative effects on varied countries, the conflict has negative effects on Turkey and its relationship with other countries.

The Syrian conflict refers to an ongoing armed conflict in Syria that pits the forces whose loyalty lies with the ruling Syrian Ba’ath Party government and other forces that aim at eliminating it from power. This civil was started in March 15th 2011 as popular demonstrations that eventually spread throughout the nation by April 2011. It is worth noting that the demonstrations were part of a wider uprising that was taking place in the Middle East, a protest that was going by the term Arab Spring (Holliday 4). In the Syrian conflict, the protestors have been demanding that the President al-Assad resigns from the presidency. The president’s family has been holding the presidency for more than four decades (since 1971). Their relinquishing of the presidency would also bring an end to the more than four decades of ruling by the Ba’ath party. However, the Syrian government responded by deploying the Syrian army to fight the demonstrators with express orders to open fire on the protestors. Eventually, the protests became armed rebellions where the opposition forces became more organized and armed as they increased in size due to uniting into larger groups ((Rochelle 3). These groups were mainly made up of civilian volunteers and defected soldiers. However, their lack of organized leadership and fractured structure has made it impossible for them to topple the government, which has characterized the uprising as the work of “foreign mercenaries and armed terrorist groups” (Rochelle 4). The clashes usually occur in cities and towns all over the country with no discernible or clear fronts.

While the conflict has been well contained within the borders, Turkey has felt the effects of the conflict. In fact, Turkey is involved in the conflict in broader strategic terms especially considering the risk of spillover along the Turkish-Syrian 500-mile border. The spillover effects have accentuated the political and sectarian divisions, and compromised Turkey’s overall stability. However, Ankara’s involvement in the conflict as a direct player has been outlined by the fact that it has been supporting unarmed and armed groups that try to oust President al-Assad’s regime (Rochelle 5).

One of the key effects of the Syrian conflict has been with regard to the cost of putting up with Syrian refugees within the Turkish border. As of January 2013, there were more than 163,000 Syrians holed up in the two temporary receiving centers and thirteen refugee camps in Turkey. Ankara has been offering these refugees with long-term accommodations, schooling and healthcare opportunities (Rochelle 15). While these may seem like simple affairs, research shows that Turkey has been incurring enormous bills for the support totaling up to around $40 million every month. As a way of responding to the influx of the refugees, Ankara set up a Temporary Protection Regime in line with European Union’s directives pertaining to mass displacements. These directives have made Turkey to commit itself to guarantee temporary residence rights, as well as access to fundamental services (Rochelle 15). However, it does not allow Syrian entrants to have access to the asylum system that the Office of the United Nations High Commissioner for Refugees offers. In addition, the refugees do not have the right to work. In essence, Ankara has been providing a temporary asylum to refugees crossing the border devoid of passports on condition that the refugees agree to remain in the refugee camps. However, enormous numbers of Syrians have defied this rule and crossed the border illegally. Others have entered the country using their passports but ended up overstaying the 3-month residence window. It is estimated that more than 70,000 Syrian refugees used travel documents and passports to get into turkey and overstayed the 3-months. It is worth noting that there are thousands more Syrian refugees held up in camps at the Syrian side of the border including Atima refugee camp. While there have been efforts by international bodies and private, as well as public Turkish aid groups to donate to the Syrian refugees, they live in depressing conditions (Kelley 12). The build-up of refugees in Turkey shows that the country’s enormous ability has become extremely overwhelmed by the varied tasks pertaining to refugees including monitoring, processing, as well as providing basic amenities for the enormous numbers of people escaping the Syrian conflict.

In addition, the Syrian conflict has had negative effects on the economy of Turkey. This goes beyond the cost of sustaining the Syrian refugees. One of the key successes of the past decade in the Middle East revolved around the economic integration between Iraq, Syria and Southern Turkey (Seyfettin 7). While the overall amount of trade in the area was trivial in comparison to the overall trade volume of Turkey, it came as a crucial factor in the development of Southern Turkey, an area that has been considerably impoverished for a long time. Unfortunately, this trend was dramatically reversed by the Syrian conflict (Kelley 12). The deterioration of the security situation in Southern frontier has prompted Ankara to close the border with Syria for commercial traffic thereby bringing the economy of the frontier to a halt. In addition, the conflict has worsened relations between Turkey and Iraq, which as frequently blocked trade between Iraq and Turkey as a protest against Ankara’s association with forces aimed at toppling the al-Assad’s government, as well as the Iraqi Kurds (Holliday 4). These efforts have been mainly aimed at closing or bringing the previously vibrant trade between the impoverished Southern Turkey and the Fertile Crescent in the north. This is evident especially when looking at the exports from Hatay to Syria. According to statistics, the exports to Syria from Hatay by November 2012 reduced to the equivalent of less than half the 2010 level.  This reduction has been replicated in all provinces in the southern province.

Moreover, the conflict in Syria has strained relations between Turkey and other countries such as Russia and Iran. These strained relationships have been mainly with regards to the ideological standing. Scholars note that the radical leftist groups in Syria among other extremists have been mobilized against the cooperation between Ankara and Washington and NATO in the course of Syrian crisis (Jackson 13). The political landscape of Turkey still incorporates remnants of the violent leftist movements that were prevalent in the 1970, not to mention the deeply anti-American ultra-nationalism. Testament to the capabilities of the active albeit small movements is their mobilization of forces against the deployment of Patriot missiles in the southern part of Turkey. On 21st January, the Turkish Youth Union, which is one of the far-left nationalist group, was responsible for the attack on German Patriot missile teams that had been dispatched to assist in defending Turkey against security threats emanating from the Syrian conflict. The TYU forces fired smoke grenades at the NATO soldiers while also burning American flags. Scholars note that as much as such groups come as a representation of a marginal political current, their impact could be out sized especially considering the coverage that they have received. Research shows that the Russian and Iranian media gave these incidents an extensive coverage so as to render credence to the anti-NATO slant, as well as heighten the political costs of Ankara for their support for Syrian opposition forces (Jackson 14). These narratives are bound to stimulate further unrest in the country thereby amplifying the instability in Turkey.

Further, there has been increasing fears that the Syrian conflict would be likely to result in sectarian spillover in Turkey. This is especially considering the deep demographic ties that exist between Northern Syria and Southern Turkey, which increases the possibility that parallel fault-lines would be triggered in Turkey. It is worth noting that Turkey incorporates more than half-a-million Arab Alawites, who share the same religion with Assad. A large number of these Arab Alawites live in the southernmost part of Hatay Province and are distinctively different from Turkish Alevis, who are not that close to Syria’s Alawites. Nevertheless, a large number of the Turkish Alawites are pro-Assad as evidenced by the demonstrations that they have held in the south carrying Assad’s portrait and chanting against Washington and Ankara’s policy for Syria (Gwertzman 14). While the Alawites acknowledge that it is necessary for Assad’s regime to be eliminated from power, they are afraid of the effect that the regime’s collapse would have on their safety. On the same note, there are fears that the Sunni militants that are returning from fighting the Assad regime will eventually turn against the Alawites in Turkey. Testament to the increased likelihood of this conflict is the fact that Ankara has undertaken measures that would avert the occurrence of this kind of sectarian conflagrations (Gwertzman 16). It moved certain Sunni Arab refugees from Hatay province which has a mixture of Sunni and Alawite Arabs to refugee camps in interior Turkey.

While these are considerably significant effects, the most significant effect of the Syrian conflict on Turkey revolves around the resurgence of PKK or the Kurdistan Workers Party. After the ties between Ankara and Assad were severed in 2011, Damascus deserted the commitment that it had made in 1998 pertaining to the prevention of the PKK from carrying out its operations within its soil (Cagaptay 9). It is worth noting that Assad stood to make enormous gains from creating the impression that his continued reign is necessary for limiting the strength of PKK in northern part of Syria. Research shows that the PKK has embarked on increased violence since late 2011 thanks to the material and logistical support from Syria. In fact, its leader announced in 2012 that the PKK was modifying its strategy from guerilla warfare to one that would involve pitched battles in an effort to seize territories (Cagaptay 9). Testament to the seriousness of these threats was the attack in late 2012 when PKK destroyed the only bridge that leads to Beytussebap, cut electricity to the southern town and executed raids in the residence of the district governor. These underline the instability and decreased security that has been triggered by the Syrian conflict. In any case, Assad has too much in his hands to concentrate on the 1998 commitment.

In conclusion, the Syrian conflict has been one of the worst in Middle East in the recent times. It was triggered by protests that were aimed at eliminating the Assad regime as part of the Arab spring. However, the protests grew into armed rebellions with civilians and defected troops fighting the Syrian government. Turkey became embroiled in the conflict thanks to its support for unarmed and armed groups that try to oust President Assad. This conflict has had severe effects on Turkey including enormous costs of supporting the refugees (to the tune of $40 million dollars per month), resurgence of PKK, reduction of trade between Souther part of Turkey and Syria, straining of ties between Turkey and Iran and Russia thanks to its support for NATO, as well as increased fears of parallel conflicts between Sunni and Arab-Alawites in turkey.