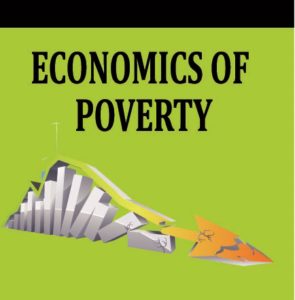 Poverty is one of the issues on the top global agenda. Poverty has been accepted as a multidimensional issue. It is a factor that has remained elusive and the central point in the study of production, distribution, and consumption of resources in the society (Barrett & Carter, 2013). The measurement and conceptualization of poverty have been considered in the academic arenas as a matter of contention (Cowell, 2003). The purpose of this study is to provide an accessible synthesis that would contribute to the understanding of why poverty exists, measurement of poverty, reasons for the existence of poverty and the possible mitigations to reduce and eliminate poverty. The study will also focus on money metric approaches and their significance to income and consumption. In addition, the study will argue the case of the capability approach on monetary income and consumption level.

There has been a transitional thinking on poverty. However, the thinking has changed over the last centuries. The traditional policy debate provides two different views concerning poverty. In the past years, poor people had no potential to pursue anything other being poor (Barrett & Carter, 2013). As such, poverty is considered as inevitable. However, prominent thinkers are of the view that poverty is the primary reason for economic development and progress. The prominent thinkers found it necessary to develop policies that would protect people from shocks associated with poverty and ensure that social stability is maintained.

The traditional policy debate provided for an option of identification of the poor by focusing on consumer preferences, income generated and the demand for the commodities available in the market (Barrett & Carter, 2013). There are common methods and approaches which are used to measure poverty. Poverty is viewed as a social ill. However, public action initiated by the government can be sued to avoid it (Barrett & Carter, 2013). Such actions must be consistent with the policies on economic development. According to the prominent thinkers, the best strategy that can be sued to eliminate poverty should adopt policies that allow individuals to enjoy economic freedom by pursuing their economic interests (Cowell, 2003). Today, most countries are striving to avoid poverty by employing strategies that can be used to eliminate it at all costs.

Analysis of the Pros to Economics of Poverty

It is the responsibility of the various states to ensure that people have access to essential materials which are necessary for personal fulfillment (Barrett & Carter, 2013). The most prominent tool to curb poverty is equity. It provides a breakthrough to all traps of poverty. Anti-poverty policies should be used to protect and promote the welfare of the members of the society. Such anti-poverty policies should provide public education and sound health systems. Besides, the functioning financial market should be considered as a crucial element that can help the future generation to avoid poverty.

There are very many countries that are still struggling with pervasive poverty, food insecurity, and environmental degradation (Barrett & Carter, 2013). Such countries are mandated with the duty to increase the level of their economic growth, reduce poverty and enhance natural resource sustainability. It is important for a country to provide policies and strategies that can be used to ensure a harmonious relationship between population growth, poverty, and environmental degradation (Cowell, 2003). If the linkage between the three is developed efficiently, then it would become easy to ensure sustainable economic growth. Addressing the issues of poverty requires a multi-organizational approach (Barrett & Carter, 2013). It calls for all official institutions including religious organizations, Non –Governmental organizations and civil society groups. Such groups can develop effective programs that can be sued to address poverty and enhance economic development. Some of the structural approaches and initiatives that can be used to address poverty include macro-economic adjustments and productivity-enhancing technologies.

The structural macroeconomic policies have been used to address poverty in different countries. In addition, the programs have proved to be sustainable in the long run. Environmental risks are inevitable in most of the developing countries. In most cases, people rely on rains for agriculture. In addition, the areas are affected by droughts. The countries are also affected by isolated markets resulting from poor infrastructure and undiversified economy (Cowell, 2003). However, these environmental factors can be addressed to promote sustainable economic development in the countries which are hit by drought and other natural calamities (Barrett & Carter, 2013). Various strategies can be put in place curb the effects of the natural calamities. In spite of the backlash thinking on policymaking, there are plans which are fostered to secure success in addressing matters of poverty. It is evident that even today, there are very many people who are being criminalized and blamed for poverty. However, it is important to acknowledge the progress which is being made in addressing poverty. People should understand that developing successful strategies can take time. However, tremendous efforts are being made to address the issue of poverty. These developments will overshadow backlash thinking on policy-making on matters of addressing poverty.

It is important to understand how different people respond to economic crises. Imposing top-down remedies play a critical role in promoting sustainable economic recovery (Cowell, 2003). Understanding how various agents both at the micro-level and macro level response to poverty provides an insight into policy prescriptions. It is essential to understand how different households respond to poverty. Understanding such responses provides useful lessons that can be used to develop macroeconomic and micro economic policies to be used in addressing poverty. In spite of the analysis concerning poverty and economics, we must acknowledge that several people are still affected by the menace. However, going forward, the problem of poverty will be a thing of the past considering the tremendous contributions of various organizations. Several countries are committed to addressing cases of absolute poverty. However, they must have good policies and political goodwill to make progress against poverty.

There are two distinct factors which should be considered in addressing the issue of poverty in both developing and developed countries. Such factors include pessimistic trajectory and optimistic path (Barrett & Carter, 2013). The pessimistic trajectory considers the low progress in the developed countries towards addressing poverty. The developed countries experienced progressive development in the 1980s and 1990s (Cowell, 2003). As such, little progress is being made to get people out of poverty. There exist their performance judges a huge gap between the rich and the poor and the poor. On the other hand, the optimistic approach considers a progressive growth rate that would help people to get out of poverty. The pessimistic approach is being applied by the majority of the developing countries such as Ethiopia and South Africa. They are committed towards a sustainable economic development since they did not experience progressive economic development like the developed countries in the 1980s and 1990s (Barrett & Carter, 2013). They are confident that they will lift the majority of people who are affected by absolute poverty by 2030.

Analysis of the Cons to Economics of Poverty

There are principle challenges that people still experience in overcoming poverty. There are a majority of people who believe that poverty is inevitable and eliminating it would be a threat to the society (Barrett & Carter, 2013). I find such arguments as retrogressive in addressing poverty in both developing and developed countries. In this case, inequality is still considered as the primary factor to attain the goal of economic prosperity. Inequality has stood out as a major hindrance to addressing issues concerning poverty. It affects both developed and developing countries. Cases of inequality make it difficult to address poverty because high-growth rates are required. It is difficult to attain higher growth rate especially for countries that experience high inequality (Barrett & Carter, 2013). As such, it becomes difficult to reduce poverty compared to countries that experience low inequality. Inequality can be experienced in both social and economic dimension. However, it is important to un-pack inequality in particular dimensions to ensure progress against poverty. In developing countries, there are inequalities in access to quality healthcare and education. As such, it becomes difficult to address poverty since the poor find it hard to get out the cycle of poverty. Access to land is also a common inequality in rural economies of the developing countries. In this case, it impedes progressive development. Gender inequality also promotes pro-poor growth over concerning command over material goods (Cowell, 2003). Therefore, inequality is the primary impediment to progressive development. It is difficult to eliminate and reduce poverty in a society which is infested with high inequality levels.

Those who are against the economics of poverty believe that inequality is the primary driver of economic development. People should not be equal in society. In a society where every individual is rich can experience retrogressive development since there will be no individuals to hire as labors (Barrett & Carter, 2013). In this way, the government and other civic organizations should provide quality public institutions that cater to the needs of the poor people. In this way, the poor and the rich should have different social amenities. In addition, they require the legal systems to be more inclusive in places that are occupied by the poor members of the society. They believe in the redistribution of wealth and more supportive role. Such policies will only ensure that the rich continue to be rich while segregating the poor members of the society (Barrett & Carter, 2013). Improving tax systems is also a high priority since it would increase revenue that can be used to remove people from absolute poverty.

Poverty can be eliminated, and external effort is required to reduce and eliminate it in both developing and developed countries. Several micro-economic and macroeconomic policies can be used to address poverty and realize a society where every individual has rights to pursue an economic interest. External programs that address poverty are important. They provide short-term and long-term aid. External development assistance is received from the developed countries. It allows the developing nations to address crises that contribute to poverty. Such funds should be directed to help the developing countries to address agro-climatic factors other shocks that affect the economy. In addition, the external aids should be used to fund programs that would help in promoting strategies for sustainable poverty reduction in the long run. Such funds should be directed towards providing social amenities such as schools and hospitals that provide quality services.

Market failure is another factor which is responsible for inequality thus affecting progress against poverty. Credit market failure should be a matter of great concern (Cowell, 2003). The poverty elimination strategies should provide efforts that work towards making the markets to work better to allow the poor people to compensate for the effects of market failures. The policies should provide other means that can be used to address the inequality that is experienced in the market. Such policies should include redistribution of resources to address the issue of inequality that undermine poverty eradication strategies. In addition, the powerful landowners should reconsider introducing land reforms. The reforms will allow the poor to acquire land that can be used to enhance their standards of living thus contributing to poverty eradication.

In conclusion, poverty is an issue that can be addressed if effective policies are put in place. Inequality is the primary contributing factor to poverty. People should be encouraged to have economic freedom and pursue their economic interest to bring an end to poverty.