How did Ducati Become the Second Most Profitable Motorcycle Manufacturer in the World Despite its Small Scale? What is the Fundamental Economic Logic of Minoli’s Turnaround?

After its liquidity crisis in 1996, Ducati, an Italian high-performance motorcycle maker, took many steps under the direction and leadership of Federico Minoli, whose main objective was to improve the image of the company by transforming Ducati into a global brand that appealed not only to “serious” consumers but also to a wider range of customers in several new market segments, its sales and profitability are increased and expanded. In 1996, Ducati mainly offered products in 3 categories of motorcycles in the sports segment – hyper –soft, super – soft, and naked, and the revenue from these three segments was as follows:

Ducati faced severe competition from the Japanese manufacturers such as BMW, KTM, Huskvama, Honda, Suzuki, Kawasaki and Yamaha in all the three major segments. Thus, in order to broaden its spectrum of revenue sources, Ducati, in 1997, entered into the business of accessories and apparels by acquiring a stake in Gio.ca.Moto; a company that was already producing a line of accessories for Ducati, this contributed to 16.6% of its total revenues in the year 2000. Ducati’s strategic decision of outsourcing its production and logistic spare parts translated in greater availability of parts and improved distribution channels, while the decision of revising its pricing policy led to a phenomenal increase in the contribution of spare parts to total revenues.  As of 2001, the company’s outsourcing has grown to approximately 87% with the company planning to take it even higher to almost 90%. Ducati was considered one of the most efficient manufacturers in the industry due to the standardization of its products, despite its relatively small volumes in 2001, as shown in the table below: 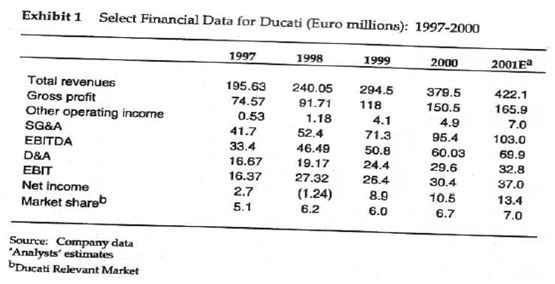 The apparel and accessories business had grown consistently following the entry of Ducati in this line of business, and thus had only one strong contender – Harley Davidson. In 2001, two simple models were released – 996 and 748, each in three different versions. This contributed to almost 43% of the company’s total revenues, the key competitors being targeted under this segment were – Yamaha, Suzuki and Honda.  The company made radical changes in its business strategies, especially in its 3 core segments – Super Soft, Naked and Sports Touring, whereby new models were launched. Armed with futuristic design and efficient handling, these models posed a direct competition to all the Japanese models, Triumph and finally BMW. Ducati also radically rationalized its network of suppliers from 200 to 130 in 1996, which ultimately helped in increasing its quality and reliability. It also redesigned its distribution strategy, which aimed at improving the overall quality of its dealers as opposed to its competitor’s policy of widening their global reach. This move helped the company in reducing the overall number of retailers across the world leading to a significant increase in the annual registrations per dealer (from 14 to 150).  The company also invested heavily in product development activities and market research which provided fundamental inputs to both design and technological innovation. In contrast to its competitors, Ducati adopted an “open paddock policy” whereby members of the Ducati club were given access to the company’s racing team dinner and other similar social events, which was viewed as the most significant purchase factor by 27% of the people interviewed during a survey while, the sports orientation of the brand and its link to competition was ranked as its most prominent features. This translated into a phenomenal increase in the company’s brand loyalty amongst its customers which improved since 1996 as shown in the following table: 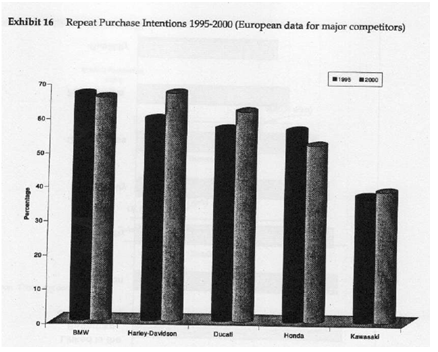 Ducati also launched several co-marketing initiatives with some of the major international brands such as Neiman Marcus, DKNY, Donna Karan, Harrods and Sothebys’ which contributed immensely in its brand building exercise. By the end of April 2001, Ducati had managed to grab almost 7% of the market share a few digits short of its target of 10%, nevertheless, its phenomenal rise from a small scale motorcycle manufacturer to a global player is indeed creditable and praiseworthy.

Since its acquisition in 1996 by the American equity firm – Texas Pacific Group, Ducati has been engaged in developing and implementing measures to increase its sales and profitability by broadening its product portfolio, restructuring its distribution network, strengthening its brand and raising production efficiency as well as upgrading its existing range of motorcycles to keep up with its competitors, as a main constituent of product differentiation.  The main strategy followed by the company throughout its entire process of its development stage is the “Judo Strategy”.  “Judo Strategy is a tactical strategy that emphasizes ability, not size or power. Judo strategists avoid fighting head-to-head and other strength trials that they are likely to lose. Through mastering this strategy, companies can learn to beat opponents on their side who have scale, power and experience” (Yoffie, Kwak, 2002). 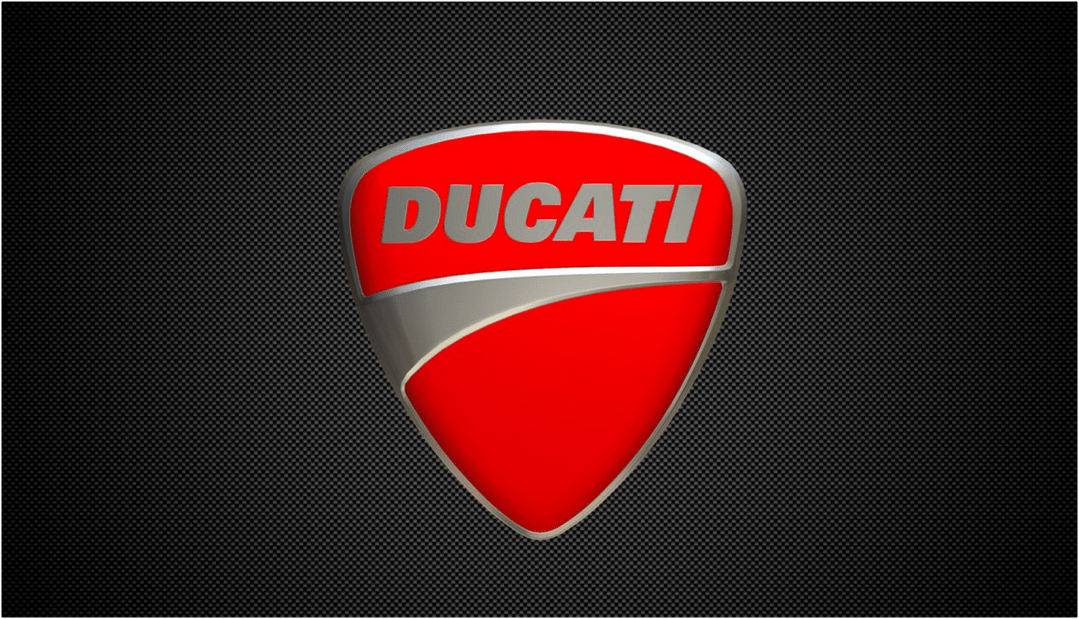 Can Ducati Sustain its Position in the Sport Segment? Can Honda and Other Japanese Manufacturers Stop its Growth in this Segment?

Ducati is one of the world’s leading manufacturers of high performance motorcycles. Founded in 1926, Ducati has a legendary name in world motorcycling culture and is widely recognized among motorcycle enthusiasts for producing racing-inspired motorcycles characterized by unique engine features, innovative design, advanced engineering and overall technical excellence. With an extensive racing pedigree dating to the 1950s, Ducati motorcycles have dominated the World Superbike Championship, winning ten of the last twelve manufacturers’ titles since 1990 and more single race victories than all other manufacturers combined. 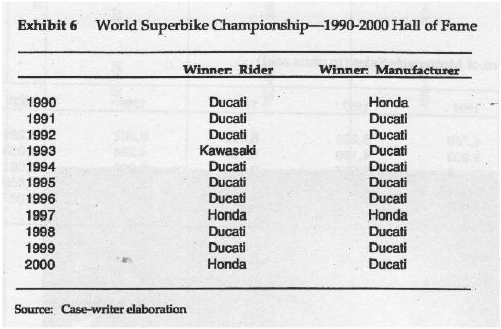 The market for large displacement motorcycles was essentially divided into four major segments by the industry experts: off – road, cruisers, touring and sports bikes. The largest players in all the above market segments were Japanese manufacturers like KTM, Yamaha, Suzuki, Kawasaki, Huskvama etc.  Thus the niche that Ducati identified as its relevant market was sports bikes which consisted of four sub segments as shown in the following table: 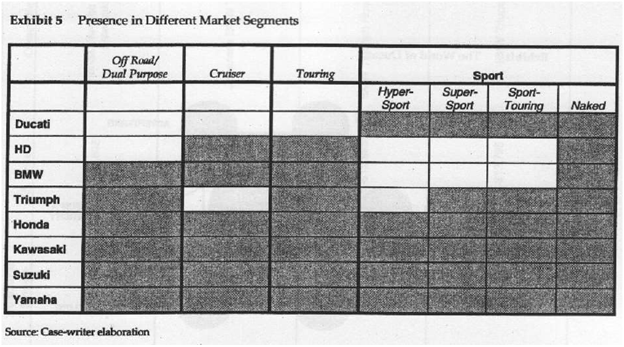 The Japanese manufacturers dominated this segment as well, while the European companies such as Ducati, BMW and Triumph vied for market share. But with the developmental strategies designed and implemented by Minoli in the Turnaround program, changed the market perception drastically and Ducati, managed to become a hugely successful brand in this niche segment.

The company has been able to grab a considerable share in the worldwide registrations of new motorcycles in the recent years which increased by 2% in the year 2001 from the last year with an estimated record strength of +51% in Japan,  +10% in UK and +8% in France (Ducati Overview, 2001).  Its strong and continued focus on innovation as well as the launch of new models has been met with great success and widespread acclaim from the customers as well as the press alike. The alliances with top international brands as well as its brand equity have been ably supported by events all over the world.

The tremendous amount of success enjoyed by the company is largely on the basis of three core strategies followed by its management – Leveraging Existing Assets, Reconfiguring value chains and Establishing niches which is exactly what Minoli did (Bryce, Dyer, 2007). He used the R&D facilities of the company which was mostly concentrated on the racing segment for developing and innovating products to reach a wider customer base, reconfigured value chains by establishing social events whereby the club members at Ducati’s were able to participate in social events of the racing team, established niche in the sports segment in which had tremendous skill and expertise. These three strategies helped Ducati gain momentum and capture a sizeable amount of market share, thereby posing direct competition to the Japanese manufacturers especially Honda motors.

Ducati mainly competes in the >500 cc Road markets and its major competitors include four Japanese Manufacturers (Yamaha, Suzuki, Honda and Kawasaki) and two European competitors BMW and Triumph. The estimated market share of the major competitors:

The company is also focusing on utilizing its e-commerce initiatives as a means of broadening its information base. The efforts to expand the various e-commerce applications could also be seen as a step forward in accessing large customer information sources that could help evaluate the actions of consumers and boost awareness of their goods and markets. To avoid competition, the organization plans to introduce a policy of distinction in the sale of goods through its online sources. Ducati’s range of financial services to its customers could also be seen as an added bonus. Ducati, by creating new business opportunities and platforms with e-commerce as its tool, seeks to rethink its core competencies and thus strengthen its future industry positioning.

Thus on account of the various strengths of the company including its global brand strength, focus market niche strategy, technical excellence, performance superiority, and strong manufacturing fundamentals it could be safely estimated that it has strong potential of competing at international levels with Honda as well as other Japanese giants and succeed with competent results.

In the words of Fedrico Minoli, President of the Ducati Motor Holding Company, “We are beginning to see the fruits everywhere of our increased investments over the last few years – in the factory in Bologna, on the racetrack, in our Ducati Stores, and on twisty roads around the world.         Ducati’s priorities for the future are clear: we will stay focused on building our brand around the globe inside and outside the motorcycle world, on achieving winning results – both financial and on the track, and above all on innovating our products to drive our growth” (Ducati Overview, 2001).