Drones are uncrewed aerial vehicles (UAVs). They are aircraft pre-programmed to carry out missions. Drones fall into two major categories. First, the armed drones with missiles and bombs usually sent to attack or assault missions. The second category constitutes those that perform reconnaissance and surveillance duties. Drones have become increasingly popular in recent years because, unlike human-crewed aircraft, they can stay aloft much longer. They are cheaper and safer than military aviation since the experts remotely control them from the ground with no danger to the crew’s crews’ life. For example, when British and US drones are physically present in Afghanistan, control is performed outside of Las Vegas, Nevada, via satellite from USAF base. When launched in the conflict zone, controllers carry out the operation on video screens in specially designed trailers stationed at Nevada desert. One controller “flies” the drone, another operates the sensors, cameras, and monitors like a video game while the third person is in contact with the ground troops and commanders in the war zone. The CIA has been using drones in Pakistan, Afghanistan, and Iraq to assassinate terrorist leaders, most notably the Al-Qaeda leader Osama Bin Laden. At least 36 American armed UAVs are present over Afghanistan and Iraq airspaces at any particular time.

Many people have confused drones with non-flying robots, confusing their benefits and liabilities further. Drones have several advantages, including Safety; they have significantly reduced military casualties since they carry no one. They are also considerably cheaper to purchase, fuel, operate, and maintain than regular airplanes. Drones carry less risk to military hardware since they are smaller and can fly much lower than traditional aircraft. We have longer hours of service without exhaustion since they have no human pilots. Besides, drone pilots or operators can easily hand off drone controls without any operational downtime (Collard, 2013). With pinpoint accuracy over great distances, they are very accurate, thus reducing collateral damage to infrastructure and civilians. Drones are likewise very lethal to enemy fights than regular aircraft. They have significantly increased the surveillance process, reconnaissance, and general military intelligence through spying. Lastly, they are more comfortable and faster to deploy than most of the military alternatives. Some of the drones’ drones’ liabilities include limited abilities since they cannot communicate with civilians for detailed intelligence, cannot capture surrendering military personnel, abandoned hardware, or an army base. Their attacks often leave behind many civilian casualties and property loss. Additionally, it is worst when drone control is taken over by the enemy, although this is impossible now, with time, it may be possible. 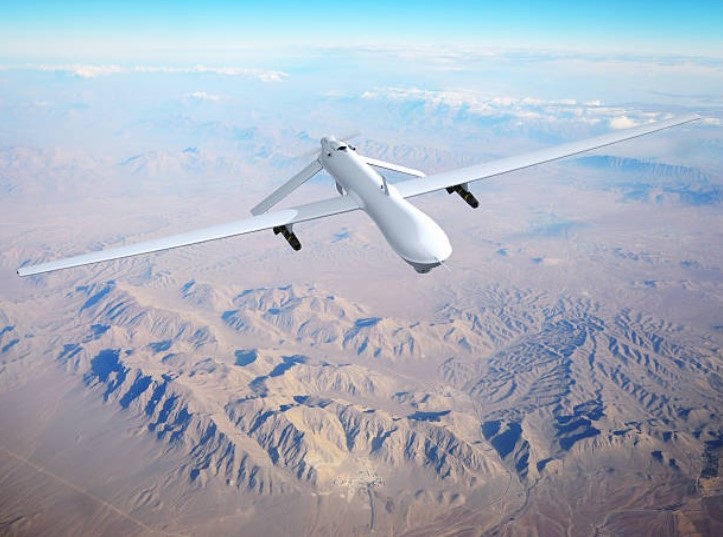 Drones are made using a state of the art technology that includes a light composite material for body construction to reduce its weight and increase maneuverability. It is strong enough to withstand high-speed cruising. They are equipped with modern infrared cameras for accurate and precise surveillance, Global Positioning Systems (GPS), Lasers, GPS guided missiles, and other top-secret systems. Their control system is through either ground cockpits or remote controls. Some drones can be launched by hand, while others require short runways. The send surveillance data to the satellite where the ground forces receive the vital information to draw an attack strategy. They can fly at very high altitudes to avoid detection by the enemies. The nose is fitted with sensors and navigation systems, the body made of composite materials that can absorb vibration, thus decreasing the noise produced (Jackson, 2008). They can be loaded with missiles to launch an attack on the targets or provide support to ground forces.

The US Armed Forces MQ-9 Reaper and MQ-1B predator are the most popular drones today for the crucial role they played in gathering intelligence whereabouts of Osama Bin Laden, specifically the MQ-1B Predator. The MQ-9 Reaper is more of a hunter capable of carrying up to four Hellfire missiles or laser-guided missiles, and it is less susceptible to ground attacks when it flies low due to its breath-taking speed. Drone technology strengthens the security systems of the Armies by removing the human sacrifice factor. They carry out risky operations such as bomb detection, search and rescue missions, and locating defects in structures. They also provide intelligence and tactical support, hack into phone lines or computers for information, observe traffic and public behavior, provide air support, as well as follow or attack suspicious targets.

Today, the attackers are adopting drone technology more efficiently. The British and USA are the prominent countries in UAV developments, while India has also recently joined the club. New events are taking a toll on the newly released US Army helicopter drone carrying a 1.8 gigapixel camera capable of taking clear ground pictures from high altitudes and sharp sensors that provide aerial surveillance. Developments are on for a drone programming software that will enable the drone to make its decision in a situation where human error is possible.

Drones have always proven their reliability by rising to the occasion in cases of need. From surveillance, intelligence reports, rescue missions to launching missile attacks, they have genuinely proved critical. They are indeed an engineering spectacle combining the best of mechanical, electronics, and software technology. Despite these, drone technology has resulted in unintended consequences like civilian casualties and property destruction.

Drone technology has had positive implications and uses that were not originally intended (Stein & Joshi, 2013). Amazon CEO Jeff Bezos revealed in a CBS television that they are testing drones that could deliver packages in less than an hour after an online purchase. The drones can handle loads of up to five pounds.

The use of drones includes hurricane hunting without risking human life. The program’s Global Hawk drones, NASA and National Oceanic and Atmospheric Administration (NOAA) joint project, can be in the air for almost 30 hours flying at a speed of 11,000 miles. With their 116 feet wingspans, they can reach and stay in dark areas performing valuable surveillance. Small, lightweight drones that look like airplane models can survey the landscape with thousands of digital images that can be combined into 3-D maps. These drones use GPS and are inherently safe. US government also uses drones to monitor animals, land, and species that live there. The Interior Department, Bureau of Land Management US Geological services use UAVs to control wildlife populations, road mapping, and wetland survey for land management purposes. Other uses of drones include agriculture to monitor fields. For example, in Japan, UAVs have been flying Yamaha RMAX for over 20 years and Search and Rescue missions of automobile victims, as was the case in Canada, May 2013.

Although drone technology is one of the best techno-break throughout the 21st Century, there is a pervasive vulnerability in the robotic aircraft. The control algorithms for these massive machines are fundamentally written in an insecure manner. There is no systematic way to programmers for weakness as they build software that runs the drones (Jackson, 2008). Programmers patched versions of software whenever they find a hole, anti-viruses, and other intrusion detection software to handle medium-sized threats. Updating control software on a drone practically means rectifying the whole aircraft; these security programs often introduce new forms of vulnerabilities.

To address these vulnerabilities, there is a need to develop an entirely new coding and then run that software called High-Assurance Cyber Military Systems on a series of drones and robots. Other vulnerabilities include virus attacks on the cockpits, leaking classified video streams, malware ordering nuclear centrifuges to self-destruction, hackers remotely accessing pacemakers, and insulin pumps, amongst others. Many of these drones share a typical structure with an insecure cyber perimeter constructed from standard software components. The only solution to these is a universal software checker that sniffs out any program’s program’s potential flaws.