Differences Between American Vs. Indian Marriage

Cultural diversity is a growing characteristic within human cultures that is easily traceable across all social setups. It is therefore a widely sought-after clarification of the differences found between the actions of people from various parts of the world and those who share the differences in cultural believes and practices. For example, marriage traditions vary from one community to another and this is more evident for people that live in different locations and have different ancestors. Therefore, this paper aims to examine the cultural shock that an Indian culture outsider is seeing from the Americans for a romantic union. There are distinct differentiating characteristics of the two cultures as portrayed by Indians and Americans between the ethnic marriages.

The Indians have held dear to traditionally arranged marriages over the course of cultural evolutions. More surprisingly, the Indians still engage and believe in traditional marriages in which the union is not founded on love but on the groom’s parents take responsibility for getting the bride to their husband. This meant that none of the marrying individuals had a clear idea of who the spouse was to be, and that they relied on parental choices and consensus. Nevertheless, a changing trend has been observed in the recent past with grooms and the brides being allowed time for engagement through which compatibility is tested and with approval then formal marriage ceremony shall be performed by the parties. Nonetheless, the marriage cycle in the Indian culture takes into account other factors, including the compatibility of the horoscopes with the married parties, income, family history, social standing as well as caste among other considerations. The Indian culture holds marriage institution with high regard and is seen as sacred and this informs the choice for parent to take an active role in such preparations because they are seen to be wiser than the children are. The marriage ceremony occurs at night with the Hindu culture with an approximate stretch of about six hours. Festivities and merry making prior and after the ceremony are constant features that define the cultural marriages by the Indians. In addition, gifts are not stipulated as to who is to give during the wedding, and as such the two families involved shop for the festive day gifts. ‘Vedic rites and rituals’ stipulate unique laws that govern the execution of the marriage (‘iloveindia.com’, paragraph 1-3). There is exchange of vows and promises among which the engagement is to be honored and kept intact until death separates the parties. 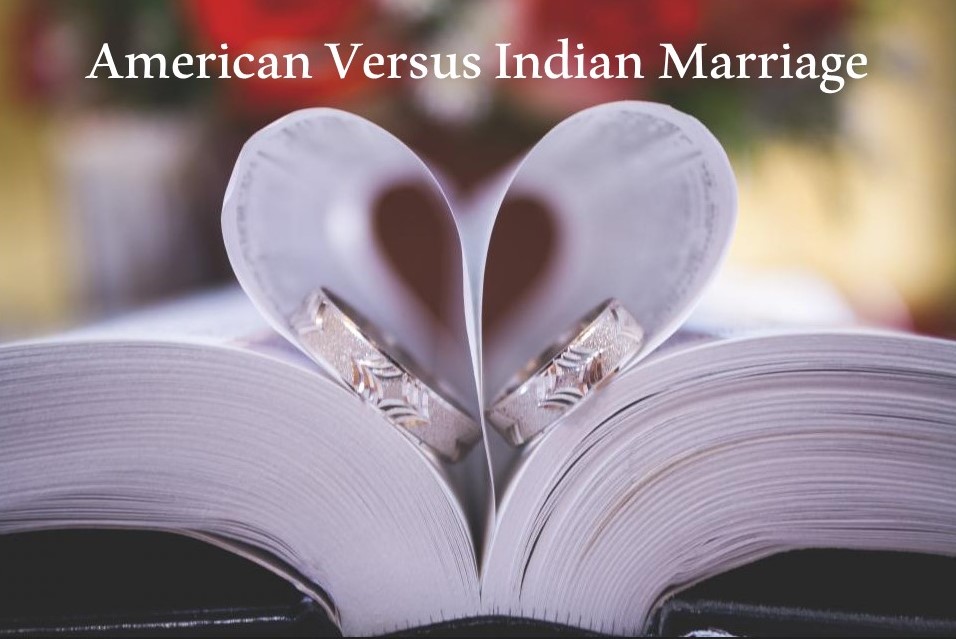 Nonetheless, much is the difference that can be found between cultural marriages as performed by the native Americans and the native Indians. Hence, this paper is addressed on behalf of an outsider from East India who observes and was deeply surprised by the American cultural marriage. The understanding of the liberty at which the western cultures bestow on individual persons in deciding on spouses is in itself a great shock in such an Indian society where the parents take an active role in deciding on spouses to their children. American societies have a dating clause where young people are introduced to relationships with intimacy clauses that lead them to marriage relations (Fish, para 1-5). This also reflects a loved moral in marriage where, unlike the Indian society, marriage is based on the basis of love and not on the cultural ties of parental choices. Nevertheless, it is worth noting that the traditional marriage systems upheld by native Americans were more alike with such practices that dominate the Indian culture even today.

The observer noticed a peculiar ceremony that happened at the attorney’s office in the account of a surprising discovery by the East Indian resident, while visiting the United States. On enquiry and keen observation, a couple was exchanging marriage vows and a marriage was being presided over by the attorney. In the marriage according to the observer, there lacked any spiritual engagement and the signing of the marriage certificates was only presided over by the attorney representatives (Grossman and Yoo, para 1-5). This therefore contrasted much with the Indian cultural marriage where a wedding ceremony is presided over by a religious leader which symbolizes the divine nature of a marriage union. In comparison, the civil marriage was based solely on friendship and affection, where the pair had already moved in together and had merely declared the union official. The parents were least interested because, to the Indian’s shock, most family relationships with either party had no contact beforehand, a finding that meant the observable great difference between Indian and American cultures. Indian culture often abhors dowry practices and various rituals are conducted before a formal marriage, though civil marriage was not based on this in the American context cultural issues like dowry.

The American marriage only lasted shortly after which marrying and partying ensued with all kinds of fun being witnessed. The majority of the participants in the parties were grownups where unlike with the Indian culture, all groups are represented in such a ceremony. The observer noted that the marriage was not covered by any particular legal framework as defined in Indian cultural marriage provisions. The civil marriage as witnessed in America fails to recognize the sanctity of the institution and supremacy of God and is often contractual. The wedding couple signed into a marriage certificate that provided that the union was binding for only seven years upon completion of which, the couple had liberty to move out at will. This shocked the observer the more with the Indian marriage vows providing for no such a provision of exiting the union at will or even after a predefined time.

In conclusion therefore, the western cultures, as presented by the civil wedding witnessed in this context shows a great disparity with the cultural provisions on marriage in India. The observer was keen to not such differences as the willful acceptance of marriage by partners represented by love in the American context. The Indian context presents a scene where the parents have the active role in deciding on their children partners (Galt, para 1-7). On the other hand, chastity and God’s supremacy are honored in the Indian cultural weddings whereas in America, civil marriages take no regard on spirituality of the marriage institution. Contracts in marriage are observed in America but are not seen in India.