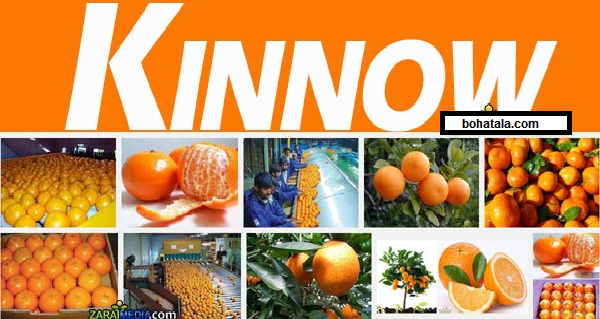 The kinnow is a variety of citrus fruit cultivated extensively in Punjab region. It is  a hybrid of two citrus cultivars — “King” (Citrus nobilis) x “Willow Leaf” (Citrus deliciosa) — first developed by H. B. Frost at the Citrus Research Centre of the University of California, Riverside, USA. After evaluation, the kinnow was released as a new variety for commercial cultivation in 1935. Among different Citrus varieties grown in Pakistan, Kinnow Kinnow mandarin has inter and intra orchard variability in all fruit characteristics. Mono embryonic strains are important with pollen self incompatibility for seedless trait. The seed formation may be due to foreign compatible pollen. In poly embryonic strains, even if zygote is a failure, the pollination triggers nucellar embryo genesis resulting in apomictic seed formation which is undesirable if the objective is seedless fruit. Mono and poly embryony segregate in Kinnow populations in varying frequencies. Poly and mono embryony (Fig. 2) must be coming from parental genomes. Mono embryony was 65%, the two embryos per seed were 22% and poly embryony was 13% in total 10534 seeds studied. These percentages depended upon the samples collected. Mono embryony provides new hybrids and nucellar poly embryony gives embryos of the somatic cell lines present in branches. Mono and poly embryony seems to be under genetic control. Kapiro (2004) found that one gene is essential for nucellar embryony to occur and a second unlinked gene strongly influences the number of embryos per seed in Poncirus trifoliata. Analysis of quantitative trait loci revealed the presence of six genomic positions, two in Poncirus trifoliata and four in Citrus volkameriana contributing individually up to 24% of the total variation for apomixis. One of the markers associated to apomixis (Apo-2) is also associated to embryony type. Therefore the genetic control of apomictic reproduction found in Citrus nuceller embryony is quite complex. The explant culture of mono and poly embryonic Kinnow seedlings have differences in growth rate (Table 2). The initial growth of explants is always slow which increases with passage of time and growth is always faster in subcultures. In this experiment, the growth of explants was compared after three weeks. Although poly-embryonic seedlings are weaker than the mono embryonic ones yet the explant gained relatively more weight in the former in given period. All the four types of the explants gained weight in the culture media and showed the growth indices. Explants from poly embryonic seedlings were responsive to culture conditions studied while explants from mono embryonic seedlings had weak culture response. Genetic improvement can be achieved within Kinnow cultivar by selection and vegetative propagation of natural mutant branches for various degree of embryony. Importance of nucellar embryony for isolation of somatic cell lines having desirable fruit characteristics cannot be ignored. mandarin (Citrus reticulata) is the major cultivar that captures more than 70% of the total area under Citrus cultivation. Kinnow is King and Willow-leaf mandarin hybrid developed by H.B. Frost in 1915. 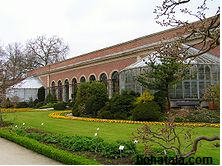 Orangery of the Botanical Garden in Leuven (Belgium)

Citrus trees grown in tubs and wintered under cover were a feature of Renaissance gardens, once glass-making technology enabled sufficient expanses of clear glass to be produced. An orangery was a feature of royal and aristocratic residences through the 17th and 18th centuries. The Orangerie at the Palace of the Louvre, 1617, inspired imitations that were not eclipsed until the development of the modern greenhouse in the 1840s. In the United States the earliest surviving orangery is at the Tayloe House, Mount Airy, Virginia. George Washington had an orangery at Mount Vernon.

Some modern hobbyists still grow dwarf citrus in containers or greenhouses in areas where it is too cold to grow it outdoors. Consistent climate, sufficient sunlight, and proper watering are crucial if the trees are to thrive and produce fruit. Compared to many of the usual “green shrubs”, citrus trees better tolerate poor container care. For cooler winter areas, limes and lemons should not be grown, since they are more sensitive to winter cold than other citrus fruits. Hybrids with kumquats (×Citrofortunella) have good cold resistance. 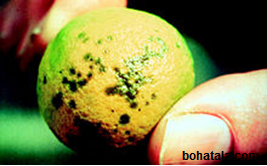 Citrus plants are very liable to infestation by aphids, whitefly and scale insects (e.g.California red scale). Also rather important are the viral infections to which some of these ectoparasites serve as vectors such as the aphid-transmitted Citrus tristeza virus which when unchecked by proper methods of control is devastating to citrine plantations. The newest threat to citrus groves in the United States is the Asian Citrus Psyllid.

European brown snails (Helix aspersa) can be a problem in California, though laying female Khaki Campbell and other Mallard-based ducks can be used for control.

Since 2000, the Citrus Leafminer (Phyllocnistis citrella) has been a pest in California boring meandering patterns through leaves.

In eastern Australia, the Bronze-orange Bug (Musgraveia sulciventris) can be a major pest of citrus trees, particularly grapefruit. In heavy infestations it can cause flower and fruit drop and general tree stress. 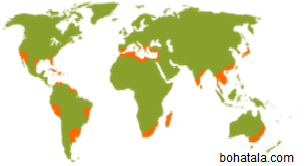 The Asian citrus psyllid is an aphid-like insect that feeds on the leaves and stems of citrus trees and other citrus-like plants – but the real danger lies in that it can carry a deadly, bacterial tree disease called Huanglongbing (HLB), also known as Citrus Greening Disease.

In June 2008, the psyllid was spotted dangerously close to California – right across the international border in Tijuana, Mexico. Only a few months later, it was detected in San Diego and Imperial counties, and has since spread to Riverside, San Bernardino, Orange, Los Angeles and Ventura counties sparking quarantines in those areas. The Asian citrus psyllid has also been intercepted coming into California in packages of fruit and plants, including citrus, ornamentals, herbs and bouquets of cut flowers, shipped from other states and countries.

In the United States, California is the largest producer of fresh oranges while Florida leads in juice production.

Wedges of pink grapefruit, lime, and lemon, and a half orange (clockwise from top) 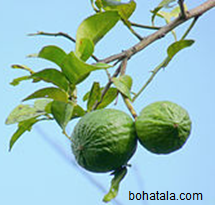 Many citrus fruits, such as oranges, tangerines, grapefruits, and clementines, are generally eaten fresh. They are typically peeled and can be easily split into segments. Grapefruit is more commonly halved and eaten out of the skin with a spoon. There are special spoons (grapefruit spoons) with serrated tips designed for this purpose. Orange and grapefruit juices are also very popular breakfast beverages. More acidic citrus, such as lemons and limes, are generally not eaten on their own. Meyer Lemons can be eaten ‘out of hand’ with the fragrant skin; they are both sweet and sour. Lemonade or limeade are popular beverages prepared by diluting the juices of these fruits and adding sugar. Lemons and limes are also used as garnishes or in cooked dishes. Their juice is used as an ingredient in a variety of dishes; it can commonly be found in salad dressings and squeezed over cooked meat or vegetables. A variety of flavors can be derived from different parts and treatments of citrus fruits. The rind and oil of the fruit is generally very bitter, especially when cooked, and so is often combined with sugar. The fruit pulp can vary from sweet and tart to extremely sour. Marmalade, a condiment derived from cooked orange and lemon, can be especially bitter, but is usually sweetened to cut the bitterness and produce a jam-like result. Lemon or lime is commonly used as agarnish for water, soft drinks, or cocktails. Citrus juices, rinds, or slices are used in a variety of mixed drinks. The colorful outer skin of some citrus fruits, known as zest, is used as a flavoring in cooking; the white inner portion of the peel, the pith, is usually avoided due to its bitterness. The zest of a citrus fruit, typically lemon or an orange, can also be soaked in water in a coffee filter, and drunk.

Oranges were historically used for their high content of vitamin C, which prevents scurvy. Scurvy is caused by vitamin C deficiency, and can be prevented by having 10 milligrams of vitamin C a day. An early sign of scurvy is fatigue. If ignored, later symptoms are bleeding and bruising easily. British sailors were given a ration of citrus fruits on long voyages to prevent the onset of scurvy, hence the British nickname of Limey.

Pectin is a structural heteropolysaccharide contained in the primary cell walls of plants. Limes and lemons as well as oranges and grapefruits are among the highest in this level.

After consumption, the peel is sometimes used as a facial cleanser. A peel of lemons or orange is commonly used as a means to moisten medical cannabis when stored with it.

Before the development of fermentation-based processes, lemons were the primary commercial source of citric acid.

Citrus fruit intake is associated with a reduced risk of stomach cancer. Also, citrus fruit juices, such as orange, lime and lemon, may be useful for lowering the risk of specific types of kidney stones. Grapefruit is another fruit juice that can be used to lower blood pressure because it interferes with the metabolism of calcium channel blockers. Lemons have the highest concentration of citrate of any citrus fruit, and daily consumption of lemonade has been shown to decrease the rate of stone formation.