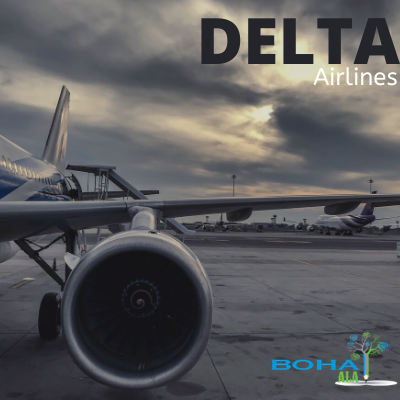 An Evaluation Of The Trends In The Macro Environment That Would Influence The Global Airline Industry Using PEST Model.

Delta airline was the first airline company providing the commercial and agriculture flying service to its clients. Delta airlines introduced the term postal service, which is used to carry mail and cargo services. In 2012, Delta airline facilitated 572 destinations in almost 65 countries. These countries were North America, South America, Europe, Asia, Africa, and Australia. Delta airlines operated almost 714 aircraft based on 5,766 regular flights. There are almost 80,000 employees working for the Delta airlines throughout the whole world.

Delta airline was a company providing services to domestic and international level. The company also invested a big amount of the airport facilities and global services as well. When we talk about airline companies, the first thought in mind is always about the services and comfort level provided by the airline company. Here is the detailed PEST analysis of airline industry which explains that how different factors in the macro environment of delta airlines affect its business and effectiveness.  (Wilfred S. Manuela Jr, 2016)

Moreover, presentation of different airline industries also matters a lot. Profit and revenue of any airline industry will totally depend on the economic representation of any industry. But now, the downturn of the airline industry is finished and the good days are started. A rising middle class was a fine achievement for delta airlines. A big number of people are travel from one place to another place for visit and business meetings as well. So these changes were good and acceptable by delta airlines. Due to these economic changes demand of airlines increased.

There is the strong growing relationship between society and airline industry. Social factors are also a big reason behind the increasing demand for air travel. There are demographic changes, which influence the air travel industry. Air travel is a source of traveling from one country to another country. The millennial generation is the biggest reason behind increasing demand for air travel. Another important reason is that airline industries are becoming popular day by day due to its services. There are almost 80,000 employees working for delta airlines. The airline industry is affecting our personal and work life together. Many other factors also available influence the airline industry directly and indirectly respectively.

Technology is a more important factor for increasing the demand of airline than ever. Technology is a most important factor than cost and connivance. Fuel efficient aircraft are higher in demand these days. With the help of latest technology, aircraft are designed that consume less fuel. Technology is involved from booking to the reservation and resolving the technical issue in aircraft. A professional staff is assigned to resolve the technical issue any time.

Mobile phones are the best source to market and promote the airline industry throughout the whole world.  People across worldwide can track the flight and reserve tickets through cell phones. All the airlines including delta airline adopted the latest technology.

Airline industries commit to providing unique services to passengers. These industries facilitating passengers with transport facilities with a high level of comfort. Airline companies felt proud due to how these companies accommodate the flight’s passengers. They are providing passengers with high-quality food, beverages, and welcome crew. The geographic scale of the airline industry is at global standards. There are many competitors in the airline industry in the world. Porter’s five-factor models are used to understand the strategy of management. We found the reason that why some companies is more popular than other companies is. Porter’s five-factor model is used to identify those factors that figure out the industry competition. (DePersio, 2018)

The airline industry is established on two groups of customers. In the first type, passengers buy tickets for many reasons that can be personal or business related. In the second type of group, people buy through different airlines or through online procedure. This buyer group is the intermediary between Airline Company and the passenger. Prices must be affordable for the passengers.

Airline companies must consider the value of passengers and should focus on the ease of passengers. Aware the passengers properly about the flight details and timing of departure. However, bargaining power of customers in the airline industry is at low threat.

Another factor of Porter’s model is the threat of new entries. There are only two reasons for this threat. One, there is little switching outlay and second, there are no services implicated. Due to these threats, the airline industry has fewer chances of threats. All the present firms have cost benefit. Although, there are low chances of changing airline company because the passenger has to pay a big amount for tickets to travel. Therefore, they can’t rely on any local or new airline company. There are fewer chances of new entrants in airline field.

The threat of substitute is a main and considerable factor in Porter’s Model. Passengers can select any other type of transport for traveling such as car, bus, and trains. This medium of travel can be costly than airplane tickets due to the distance and airlines are the fastest form of travel. Airline industries provide better services than another source of transports. Cost and services are the main reason behind switching the source of travel.

Rivalry among existing companies is the last factor of Porter’s Model. Rivalry in the airline industry is demanding due to many reasons. There is a list of airlines companies providing services to passengers all around the world. There are a large number of competitors in every field. Cost is very high in the airline industry. Different airline industries are part of existing market. The rivalry between existing industries is high and suppliers are the main and strong factor because manufacture a plane is an expensive process.

However, buyers are the weak factors due to less switching costs. Another reason of weak buyers is, substitutes are sometimes cost-effective and time-consuming as well. Profit margin is high in the airline industry because flying to other paces is a valid reason for passengers. Profit margin is totally depending on the repute and services of any airline company. Delta Airline Company is also popular in the whole world due to its services and a large number of available planes. (Revenuesandprofits.com, 2017)

Delta airlines are one of the biggest American airlines. Delta airline has almost more than 5400 regular flights and 64 international destinations. It is an oldest and world’s second number airline of America. Here is a detailed SWOT analysis of Delta Airlines. (Haseeb, 2016)

The strengths of Delta Airlines are listed here.

There are few weaknesses in the strengths of Delta airlines as well. If a company is unable to overcome the weaknesses, it can affect Airline Company badly. The company must solve and improve these weaknesses.

These are the few weaknesses of delta airlines and company must focus on these weaknesses by resolving as soon as possible.

By utilizing these opportunities, Delta airlines can expand its business and services all around the nation and world.

There is a list of threats which delta airline faced in its time.

It was a detailed SWOT analysis of Delta Airlines, which contain strength to weaknesses of the airline over the market and industrial perspective. Threats and weaknesses of Airline Company can be overcome with the help of strengths and weaknesses. Competition is increasing day by day and company need to improve its strategies. (Phdessay.com)