Chyle leak from thoracic duct injury after head and neck surgery is a rare but severe complication that occurs in about 0.5–1.3% of thyroidectomies and 2–8% after neck dissections. The variable anatomy and fragile composition of the thoracic duct render it prone to injury. The majority of chyle leak occurs with surgery of the left neck. However, up to 25% of the chyle leak occurs with right neck surgery. Early identification and appropriate management of chyle leak is necessary for optimal surgical outcome. In this case report, we explain a case of carcinoma thyroid for which total thyroidectomy with left lateral neck dissection was done. Postoperatively there is continuous drainage of chyle from the wound site, which was managed by re-exploration and repair of the injured thoracic duct.

Chyle fistula is defined as a leakage of lymphatic fluid from the lymphatic vessels. It is a rare but potentially devastating and morbid condition [1]. The chylous fistula was first described in the 17th century as complications of trauma [1]. Chyle fistulas most commonly occur secondary to lymphatic disease or malignancy or following abdominal, neck, or thoracic operations [2]. Patients with this condition usually give a history of some comorbid conditions like the history of any malignancy or prior procedures of the chest, neck, or abdomen [3]. In post-operative patients, symptoms become evident after the start of oral feeding and depend on the site of obstruction [3]. Chyle fistulas can cause severe injury to the patient in the form of loss of fluids, electrolytes, and other nutrients. Also, chyle fistulas can result in loss of lymphocytes and immune dysfunction. Finally, chyle fistulas are space-filling and exert pressure on surrounding tissues, creating symptoms that can range from minimal discomfort to life-threatening situations [4]. Lymph vessel damage and lymphatic leakage are typical after surgery or trauma.  However, damaged lymphatics most often heal spontaneously without any significant morbidity. Conservative treatment with nutritional intervention remains the mainstay of treatment. Use of enteral diets with fat restriction or the use of medium-chain triglycerides; medium-chain triglycerides are absorbed directly from the gut into the portal venous circulation [4]. Surgical ligation can be successfully achieved when the site of the leak is identified, and the primary pathology causing the leak has not caused disruption or blockage of other lymphatic vessels [4].

A 55-year male admitted to the surgery department with complaints of left lateral neck swelling in the last one month. On examination, he has 3×3 cm swelling in the left lateral neck region, non-mobile, firm in consistency, not moved on deglutition or protrusion of the tongue. On FNAC, lateral neck swelling was diagnosed as metastatic lymph node with colloid material in it suggestive of lateral aberrant thyroid. On further investigation, the primary was found in the left lobe of the thyroid, which on FNAC diagnosed as papillary carcinoma of the thyroid. On PET scan, increased FDG uptake was found in thyroid left lobe, central and left II, III, IV, VI level lymph nodes. The right neck lymph node was free from the tumour. Diagnosis of papillary carcinoma thyroid with left lateral neck lymph node metastasis was made based on these findings.

So total thyroidectomy and left lateral and central neck dissection was performed. Bilateral recurrent laryngeal nerve and external laryngeal nerve were preserved. A drain was placed in situ.

From post-op day three, there is continuous drainage of chyle, which was gradually increased to around 1 to 1.5 litre per day from 7th post-operative day (Figure – 1). The collected fluid was aspirated and sent for biochemical analysis. It shows a high number of triglycerides (1828mg/dl). The diagnosis of chyle leak was made from these observations. 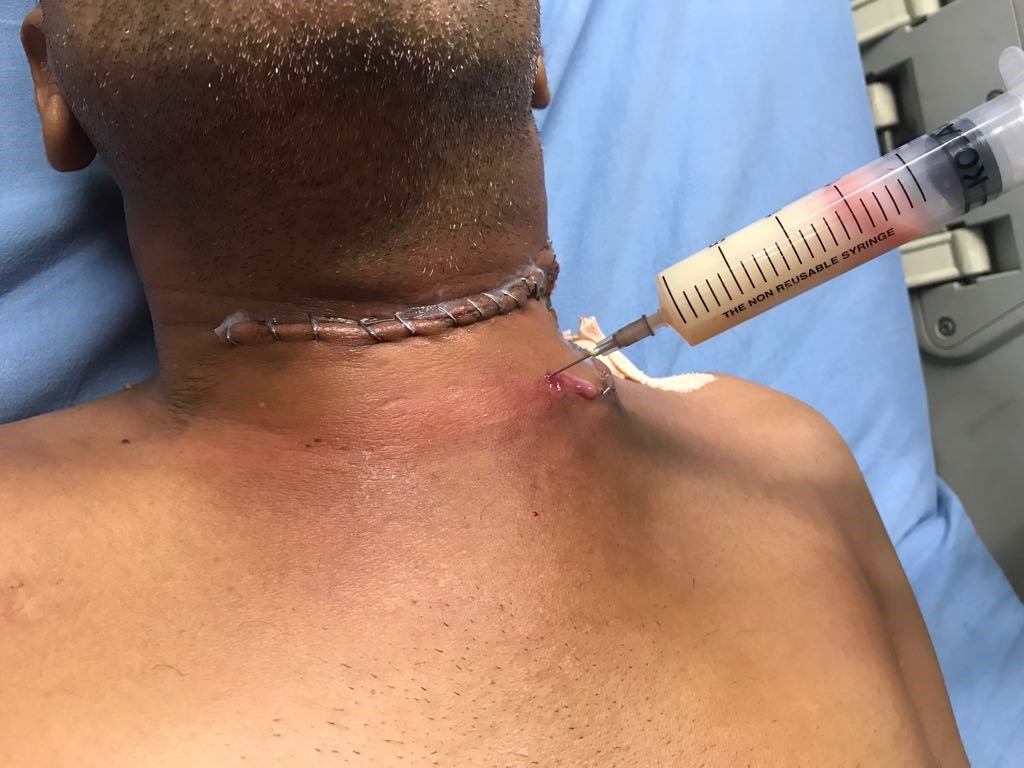 Figure-1: Aspiration of the collection which shows milky fluid

So, re-exploration was done. On re-exploration injury was found in one high arched tributary of the left thoracic duct (Figure – 2). The injured tributary was successfully ligated, and the leak was stopped. Also, the fibrin sealant was spread. Postoperatively the patient was discharged without any further complication. 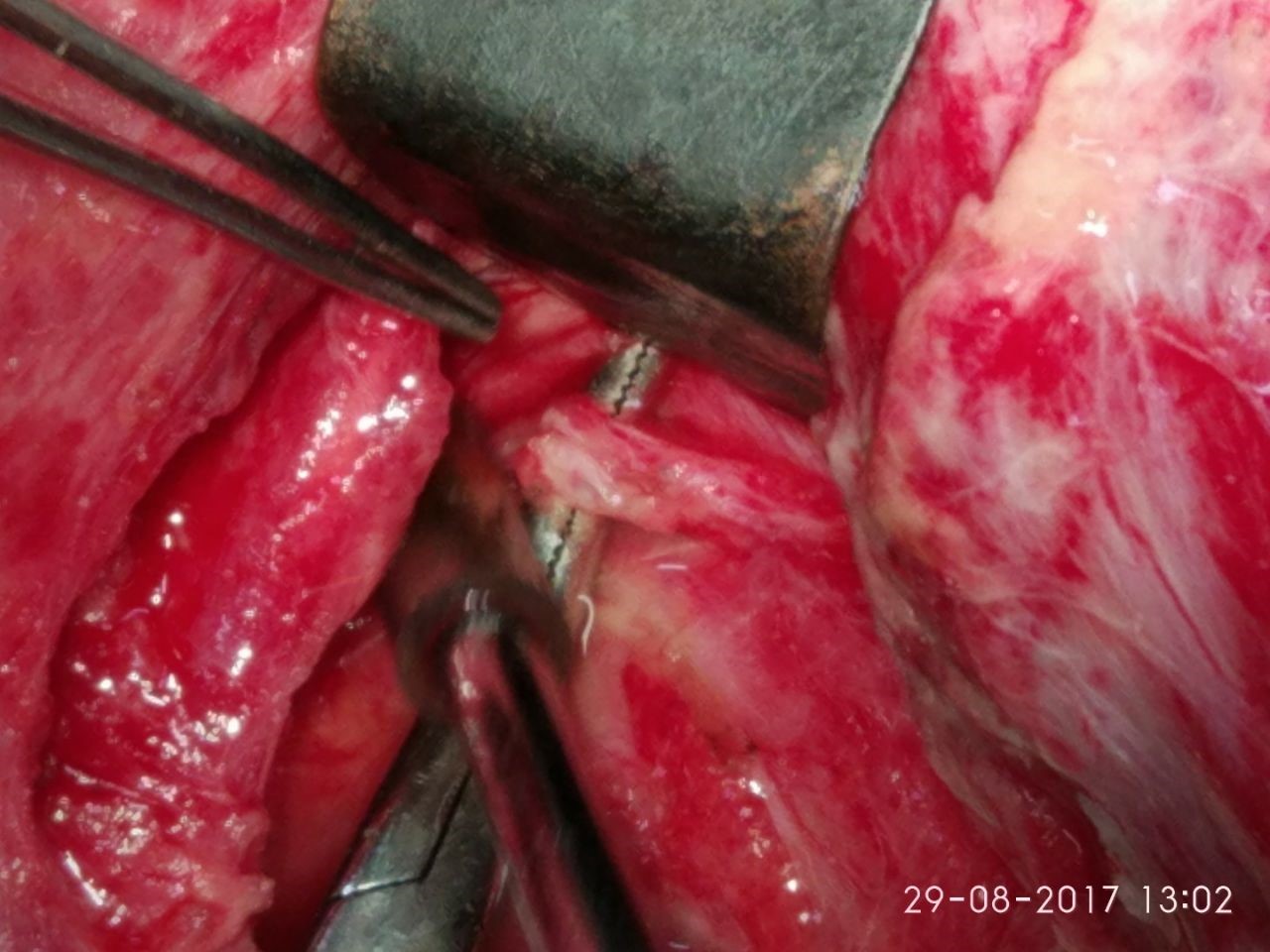 The thoracic duct is the largest lymphatic vessel that drains up to 75% of the body’s lymph from the entire left body and the right side of the body below the diaphragm [5]. The thoracic duct is particularly susceptible to accidental injury during dissection low in the neck. Due to the variable course and collapsibility of the thoracic duct, and patient fasting in preparation for surgery, identification of the thoracic duct may be difficult, and injury can be undiagnosed during surgery [5]. Because of the presence of multiple terminations, the thoracic duct may be identified and ligated at the time of surgery, unidentified terminal branches can still result in a chyle leak [6]. A chyle leak can be diagnosed clinically; however, blood investigation may be helpful for doubtful cases. Drain fluid with a triglyceride level greater than 100 mg/dL or serum triglyceride or with the presence of chylomicrons confirmatory for the diagnosis of a chyle leak [7]. Suggested criteria for re-exploration range from outputs of >500 mL/day to >1000 mL/day output for five days [7]. When identified, the leaking thoracic duct can be ligated, covered with a muscle flap, or treated with any number of sclerosing agents, adhesive agents, or mesh [8]. A suction drain must be placed after the case.

The authors declare that they have no competing interests.

This work did not receive any specific grant from any funding agency in the public, commercial, or not-for-profit sector.