Crocs is offering innovative casual footwear for people of all ages. However recession has influenced the sales of the company. Moreover, with the increasing competition in the market, the company is facing different challenges. Currently, to draw on the prospects present in the global economy, the organisation aims to extend its activities to other countries. In order to boost its revenue, the organisation also aims to expand into the current markets. 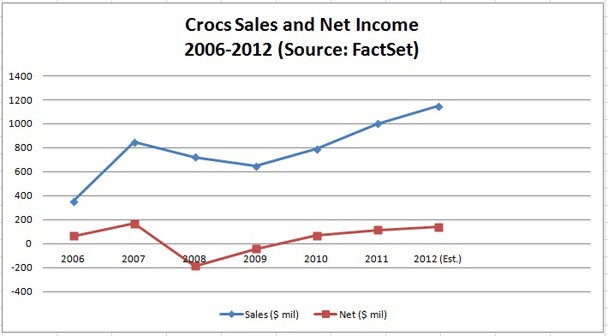 The company’s earnings were impacted by the crisis, as the company reported a substantial rise in revenues and income from 2006 to 2007. However, from 2007 to 2009, the company’s revenues decreased. From 2009 and onwards, the revenue and profitability of the business have been growing.

For people of all ages, including women, men and infants, the brand provides casual footwear. The organisation has sold over 200 million pairs of footwear so far (Cross a). Some of Crocs’ biggest rivals are Deckers Outdoor Corp. and Steven Maddan (Sharma). The accompanying picture displays the profits of the three businesses; 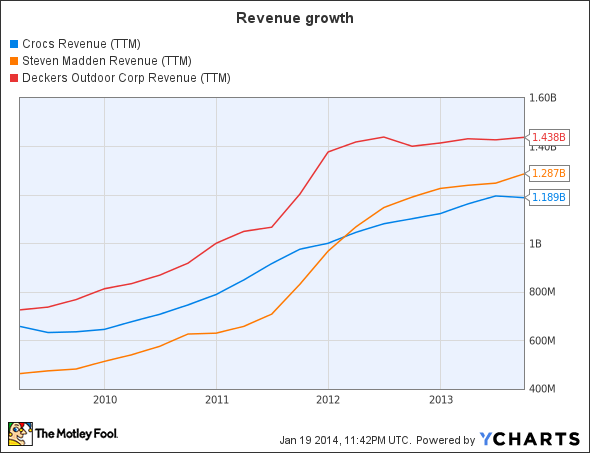 The organisation has been expanding its programmes internationally. The business has used numerous tactics, including joint partnerships and acquisitions, to draw on prospects in the global industry. For eg, to extend its activities, the firm acquired Jibbitz, Ocean Minded, Tidal Exchange, Fury and others.

It is important for Crocs to improve the brand awareness. It has been identified that the company is relatively new in the market and many potential customers do not recognize the offerings and quality of the products of the company.

The company offers a range of casual products for people of all ages. It is important for the company to slightly modify the products considering the cultural needs and values of the society.

Crocs need to modify the prices according to the consumer purchasing power in different global market to further increase its sales.

The company has presence in 125 countries (Cross a). However, it is important for the company to expand its retail stores in different countries to further increase the sales.

Promotion in the next few years will be important for the company’s future. In the minds of clients, the business wants to raise brand recognition and show a better brand profile. Therefore the task of promotion would be important.

In the short term, Crocs need to start promoting its offerings by using different tools such as billboards, social media marketing, online marketing including Google Adwords and others. This would allow the organisation to raise brand recognition and to show a positive picture of the business. This short-term tactic would also be beneficial in bringing further consumers to the company’s discount store and website. In the long run, the company needs to increase its retail outlets as this will help in increasing the sales of the company. In the long run, the company should be able to report a revenue growth of 30% annually. Therefore the sales would be around $2 billion by 2015.