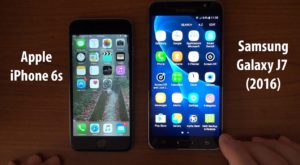 market for supremacy and popularity among the customers. The preference of the two phones for their clients is mainly pegged on the characteristic features that are attributed to each of the phones. Samsung J7 is a product from the Samsung Company while iPhone 6s is a brand product of the Apple Inc. company.  The two phones are produced by the two rival countries, which is South Korea which manufactures Samsung while Apple that makes iPhone 6s is a US based company. The given paper, therefore, entails a detailed comparison between iPhone 6s and Samsung Galaxy J7. The comparison of the two brands of the phone will involve looking at their physical features, performance, storage, price, software, physical features, design, and display.

Samsung Galaxy S7 is much prettier than its predecessor, its outer cover is made with a mix of glass material and metal that makes it feel lovelier in the hands of the customers. It has a larger surface of 7.9mm thick, the weight of 152g with a black/gold back as compared to iPhone 6s, 7.1mm thick, 143g and silver/gray/rose gold back cover. Basing on this comparison, the design of iPhone 6S makes it much prettier than Samsung Galaxy 7s by the appearance of its outer surface.

Regarding the performance of the two phones, Samsung stands a better chance than it competitor iPhone 6s. It is powered Samsung’s Exynos 8890 octa-core processor with a RAM of 4G which gives it the advantage of speed and thus making it suitable for installing of video games and others. On the other hand, iPhone 6s is powered by the Apple a9 64 bit dual core CPU and 2GB RAM, and therefore this makes the Samsung more suitable for performing the high-end tasks.

Samsung J7 is also endowed with a 12 megapixels front and 5 megapixels camera that also adjusts well to more light. On the other hand, iPhone 6s is equipped with similar camera properties. However, iPhone 6s has a better optical image stabilization that makes it perform well in low light.

Regarding the phone’s storage capacity, iPhone 6s has got the largest memory with an inbuilt memory of 128GB. This is more superior as compared to the Samsung J7 memory of 32GB internal memory and an expandable micro SD capacity.

Samsung Galaxy s7 runs on the software Android 6.0.1 Marshmallow, TouchWiz UI, unlike the iPhone 6s iOS 9.3. The Apple software locks the users from managing the iOS. However, they are only allowed to receive continuous updates as long as the phone is still operational. Samsung is equipped with additional applications, and the users are also in opposition to add more. The Samsung s7, however, does not have a stable software upgrade system.

Concerning the pricing, iPhone 6s is more expensive priced at 619 Euros and therefore is well suited for affluent customers as compared to the Samsung J7 which is relatively cheaper at 549 Euros.

Basing on the comparison, Samsung Galaxy J7 is, therefore, a more suitable alternative than the iPhone 6s; this is because it has a more dominant performance aided by its processor. Samsung J7 is also relatively cheaper and hence more affordable to the customers.