Comparison Between Attitude And Behavior

Attitude is a term commonly used in psychology, it’s an expression to show like, favor and disfavor towards someone, something, a place or an event. Attitude vary from one individual to another, there has been psychological debates whether someone can have two or more attitudes. Attitude can be positive or negative, sometimes attitude can be concrete, abstract or an expression towards anything in your surroundings, some scales are used to examine the level of attitude, and however, attitude is a hypothetical construct that assumption of measurements cannot be made at once. (Wanke, 2014). Attitude measurement can be implicit and explicit, where implicit measurements are assumed to be automatic and not directed in a conscious way, whereas explicit measurement entirely depends on thee displayed behavior by individuals. 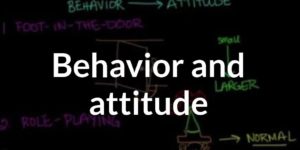 Learning contributes to most of the attitudes people hold, people form attitudes through learning from other people are the education system of learning. Attitude formation can be traced back from a number of theories such as classical conditioning, instrumental conditioning and social learning. The study of how attitude develops within people involves the study of how people form evaluation of persons, places and things, once attitude is formed, it differs from personality in that an attitude is expected to change as one experiences things but personality rarely changes. Interacting with object can have an influence on how individual develops or forms his / her attitude, according to mere exposure effect; people are more likely to have a positive attitude on attitude objects when they were exposed to it frequently than if they were not. (Vogel, 2014) Sometimes it’s perceived that, when attitudes of two close individuals which don’t match one another, one person might change his / her attitude to match the other person’s attitude.

Society can affect individuals and group behavior, how society affects our behavior depends on the culture variations of the specific societies. Society can influence individual’s and group behaviors in the following ways; often society exposes us to pressure of doing certain jobs or task that we might not be interested in in order to meet society expectations such as financial stability, success and gender roles. (Minton, 2014) This will influence on how we carry on ourselves and behave to other people. Secondly, not everybody is born morally upright and therefore society bars those who are morally deranged from doing some immoral acts due to fear of  punishment, for example some people refrain from criminal behaviors because they fear arrest and if the arrest wouldn’t have been there, they could have committed these behaviors. Society can cause people to develop lying behaviors so as to meet society expectations to make other people proud or to gain respect from the society. Society instills fear on some individuals not to expose some of their hidden behaviors for example gays might not come out in public to express their feelings because of fear from the society.