1. Development Status & Evolution: Compare and Contrast between Vietnam and Thailand

a. The Core/Periphery Status of Vietnam on a Worldwide Scale 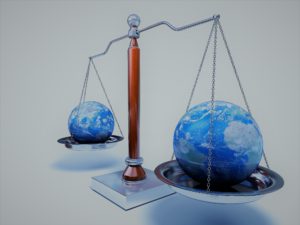 Vietnam, ranked as 131st in the Global ranking (“Heritage Foundation, 2016) had been regarded as one of the countries in the world that had made a significant progress within the past two decades and it is progressively integrated into the world economy. (“Global Affairs Canada, 2015”) The poverty rate in Vietnam had significantly reduced at an unprecedented rate. However, Vietnam economic growth has slowed in recent year, meanwhile, its GDP continually grew in 2013, by 5.2 percent, regardless of the weaknesses in the global economy. (“Global Affairs Canada, 2015”) Additionally, Vietnam has been able to meet the Millennium Development Goals (MDGs) in order to eradicate the extreme hunger and poverty and also to improve maternal health. Furthermore, Vietnam had been ranked 127 out of the 187 countries on its 2012 Human Development Index by the United Nations Development Program. Moreover, Vietnam was officially declared as a country of focus for the Government of Canada’s international development efforts. (“Global Affairs Canada, 2015”)

Vietnam is one of the earliest agricultural centers that specialize in practicing wet rice farming, in which stone and metallurgical revolutions took place. (“Consulate General of Vietnam in Houston”) Corruption and graft ruin all levels of the government and the judiciary system of Vietnam. Within the Communist Party, there exist different forms of bureaucratic rivalries, vast corruption, nepotism, and most especially in its major core areas, Hanoi and Ho Chi Minh City In this regard, many of the state companies operate with a small amount of transparency. (“Heritage Foundation, 2016”) The entire business regulatory framework in the country lacks efficiency. It takes more time to start up a business in Vietnam, the public sector dominates the market and there seem to be a maintained price control and high subsidies for agricultural commodities. (“Heritage Foundation, 2016”)

The Core/Periphery Status of Thailand on a Worldwide Scale

Thailand on the other hand, became an upper-middle income economy in 2011, and has tried to make remarkable progress in economic and social challenges, migrating from a low-income country to an upper-income country. (“Worldbank, 2015”) Thailand’s economic growth is gradually developing; its economy had expanded by 0.9 percent in 2014, and still expected to improve slightly 2015-2017. Moreover, Thailand has the tendency to meet most of the Millennium Development Goals (MSGs) based on aggregate. Amidst Thailand’s successes, they have experienced serious crisis. However, the country’s economic and political leaders still wonders how the country is entering the ranks of the New Industrial State (NIS) Asia. (Setiawan, 2011)

Thailand is lingering to grow the economy for its citizens due to the moderation in the economic growth, thus making it suffers shortage of skilled labor and experienced workers in the modern economy, this leaving uncertainty for the public and private investment, especially in its core area, Bangkok. (“Worldbank, 2015”) Poverty had declined reasonably over the past 30 years from 67% in 1986 to 11% in 2014, with incomes increasing. With Thailand’s Universal Health Coverage Scheme in 2001, they’ve been able to provide access to affordable health care for all citizens. Also agricultural development had substantially progressed in Thailand, which is one of the major reasons for the fall of rural poverty in the country, with the reduction of hunger and child malnutrition. (“Overseas Development Institution, 2010)

b. The Relationships between Internal Core/Periphery Areas, Historical Urbanization Patterns and Current Spatial Distribution of Urban Areas within Vietnam

The internal core areas in Vietnam include Hanoi and Ho Chi Minh City. It had been accounted that most of the core areas of Vietnam have the paddy fields, most of the wealth and people, with many more industry, economy, cultural activity, and political operations. (Jamieson, 1993) According to Wendell Cox, (2012) Vietnam has the tendency to be the next China in relation to the rise and liberation its markets is undergoing. Basically, urbanization pattern evolved in the core areas. The political power in Vietnam lies in the core area too, Hanoi, while the economic heart of Vietnam is the second core area, Ho Chi Minh City, formerly known as Saigon. This city is the largest urban area in Vietnam. (Cox, 2012)

The internal core area of Thailand is its capital, Bangkok, which is also the largest in the country, which has all the most beautiful attractions of the country too. Bangkok had experienced high population growth since 1980 till date. The urbanization pattern of Bangkok, Thailand also experienced growth in the suburban (and even exurban) areas, having an expanding population of about 1.9 million between 2000 and 2010. The expansion is based on the periphery both within the city and in the provinces of Samut Prakon in Bangkok. This had led to a substantial spatial distribution of the urban areas within the city. (Cox, 2012)

c. The Relationship between the Locations of Internal Core Areas and the Location of Different Types of Natural Resources within Vietnam

The large availability of land in the core areas had provided a better settlement for the large population of the country which then makes it easier for them to explore the land resources for rice growing, and other agricultural production, with their gathered water resources from the Red River in core area, their mineral resources, such as oil and gas reserves in the core areas and many other parts of the country. (“The Business Times, 2010”)

d. The Effect of the Current Government Type and Specific Government Policies

Vietnam’s current government type is “Communist State” while Thailand’s current government type is based on “Constitutional Monarchy.” (“Indexmundi”) Furthermore, the specific government policies on the Ho Chi Minh City and Hanoi are based on urban renewal efforts, and how the urban governments can be empowered to support the development in the country. (Canh et al, 2013) The specific government policies on Thailand’s core area, Bangkok is based on implementing policies based on their transportation services, roads and highways, waste management system, urban planning, housing, environment, and security services. (Sankam, 2015)

e. The Forecast for Future Trends

Vietnam future trends are based on the country’s inadequate physical infrastructure and more also, its powerful state bureaucracy which makes doing any kind of business in Vietnam quite difficult and complex. In addition, its Confucian traditions had made it committed to education and human resource development, Vietnam also shares some characteristics with Japan and may tend to follow after it. Vietnam is excellent with tourism, and also benefits from the substantial and increasing international remittances that come from overseas, and finally, the 2001 approval of the U.S. Congress based on trade agreement will help Vietnam greatly with improved export access to the United States market. (“Nationsencyclopedia”)

On the other hand, Thailand’s future trends see more increase in the population in Thailand of about 4.9% by 2030. Also, the Thailand envisions an excellent place in global population trends, with analysis of changing the population structures, the age makeup of the consumer market, the diversity in the population of Thailand. (“Euromonitor, 2013”)

Conclusively, it is apparent from this analysis that Vietnam has a stronger economy than Thailand. The Vietnam government seems to take the core areas seriously and tries to improve faster than the Thailand government. Additionally, Vietnam is expected to experience more successes in the future than Thailand.

Diversity is a broad term that is used with respect to explaining the different internal factors that make up the cultural background of a country, while National Unity is a term used to brings everyone within a particular country together. Therefore, this section compares and contrasts what makes up the diversity and national unity between China and Vietnam.

a. The Diversities of the Population in China

China is a large united multi-national state, and it is composed of about 56 ethnic groups. Meanwhile, Han Chinese has about 91.59% of the entire Chinese population and the remaining 55 make up the remaining 8.41%. (“Travel China Guide”) The culture of China is called Chinese, and their alternative names are Zhonghua Renmmin Ggheguo. China has the highest population of the world and their official language is Mandari, otherwise, known as Putonghua, based on the Beijing dialect. The modern spoken Chinese is now called bai hua, and their writing system had not changed. Since China is a communist state, the religious belief of the country is based on atheism. (“Every Culture, 2011”)

The Diversities of the Population in Vietnam

Vietnam, on the other hand is filled with a variety of people from various cultural backgrounds. It is regarded as the second largest country in Southeast Asia, (“Nationsencyclopedia”) with Indonesia being the first, and its population had grown close to 90 million, with 54 different ethnic groups, each of which has their own language. And they differ in their own belief, customs, tradition, and more. (Lilly, 2015) Vietnam does not have any territories or colonies. Vietnam is influenced heavily from the Chinese language. Though, the official language is Vietnamese, spoken by a majority of the citizens. (“Spain Exchange”)

b. Relationships between the Physical Shape and Size of each Country and the Spatial Distribution

Vietnam is bordered on the north by China, with the east to South China sea, called Eastern Sea (by Vietnamese) Vietnam’s shape and size is about 329,569 square kilometers. Meanwhile, China is bordered in the east by majorly the East China Sea, South China sea, the yellow sea, Korea bay, Taiwan strait, and Bohai sea.

c. The Tensions between the Different Population Groups

There are ethnic tensions within China is quite complex and it arises from the influences of the Chinese history. Mot especially between the Tibetans and Uighurs, there had several episodes of severe inter-ethnic communal violence, which had ranged from the Lhasa riot that occurred in 2008 to the other several cases of self-immolations among the Tibetans. (Han, 2014) And according to James Palmer, (2014) the Uighurs have taken the situation worse, and had also continued the battle against the Tibetans. The inter-communal tension that is prevalent is as a result of anti-colonial violence. Meanwhile, Xinjiang had also got worse against the government, where their violence was targeted against police stations, and the tensions exploded into inter-communal killings. Thus, this has some impact on the government.

Similarly, the major current issues is the fact that most Vietnamese are the most susceptible to attack of the Cambodia’s minorities, in which many of the Vietnamese have gone to settle there. However, cases of ethnic tension had been very low in Vietnam. (“Minority Rights”) According to Frommers, ethnic tensions in Vietnam are very limited.

d. Analysis of the effectiveness of the current governmental approaches to ease the tensions

The Chinese government had taken several steps in a plight to combat the separatists and terrorists and they also ensured that they monitored religious activity in the regions concerned not to raise or spread any kind of separatist views anymore. (Bhattacharji, 2012)

e. The future of the Tensions

The tension in China has experienced a reduction in the past two years, and there hadn’t been any news to buttress the earlier report of the tension in 2014. According to Tom Philips (2015) there had been strategies put together to avert any kind of extremism or insurgency among the ethnic groups. Philips added that there had been tremendous changes in Xinjiang, and Xinjiang stands at a new starting point for exploration of development and “the energetic government celebrations are part of a concerted push to depict the regions that were troubled as a place of possible economic opportunity and not ethnic riots.” Therefore, the look of things shows that there shouldn’t be any ethnic tensions. But, life changes and anything could happen.

Conclusively, there seems to be peace in Vietnam than in China, as studies have proven in China might be at war with the United States soon. However, there are currently no war or tensions between any of the ethnic groups in the countries.