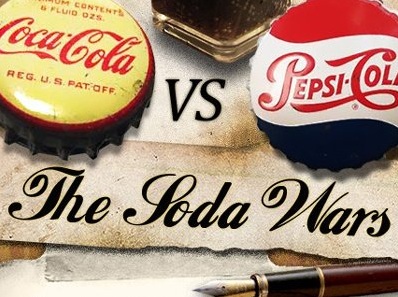 
This Market Model Coke vs Pepsi case study solution follows the more than 100-year “Cola War” between Coke and Pepsi.

When first starting to use the Market Model for market simulation, it is easier to think about this famous competitive battle when there were only two competitive products (the 6.5 oz Coke in their famous bottle, versus Pepsi’s product). When Coke and Pepsi first started competition head-to-head, Coke had about an 80% market share, and Pepsi had a 20% market share – we can ignore the other competition which has since evaporated.

The Market Map at the beginning of the Cola Wars looked like this: 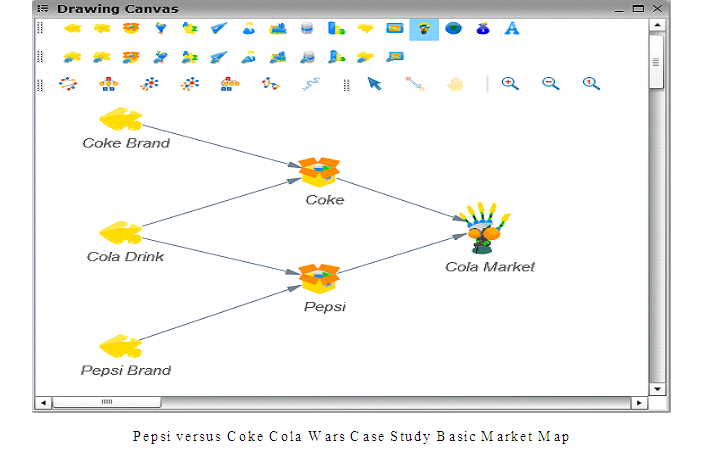 Market Maps can start out to be very simple. In this case, both products share the same category defining benefit – they are both “Cola Drinks”. If consumers cannot tell the difference in taste between the two in a blind taste test, then the only differentiating qualities are the product brands.

Data from the market already gives us a lot of information that we can use to tune the Market Model. We know the Price for Coke and Pepsi, we know their Market Share, and we have a pretty good idea of the Profit Margin (or Marginal Cost) of both from their public financial reports. With these 6 data points we can start to tune our model.

If we also have data for another point, say at a time that Pepsi was offering a substantial discount on their product or from another geography, then we would have more than enough data to completely tune a model as simple as the one we are starting with.

Because the Market Model uses a proprietary statistical algorithm to impute customer distribution data, the data collection problem becomes much easier and cost effective. Unlike with other statistical techniques, the user does not have to commission an expensive market research report just to tell them what they already know about the existing market. The Market Model allows the user to integrate their own knowledge, and then focus on understanding just those new changes relative to the existing state of the market. For example, after setting up an initial Market Model, the user can run very targeted Conjoint Analysis study to better inform them about what is new to the market (like a new feature). The new data can then be integrated into the Market Map.

Once the base model has been constructed and tuned the user can think about how they might change the conditions in the market. Here are some strategic ideas for Pepsi:

This is how Pepsi would use the Market Model to simulate the market outcome from each of these possible strategies.

To test whether adding the additional benefit of a larger bottle would be a successful strategy, Pepsi could make this adjustment to the Market Map: 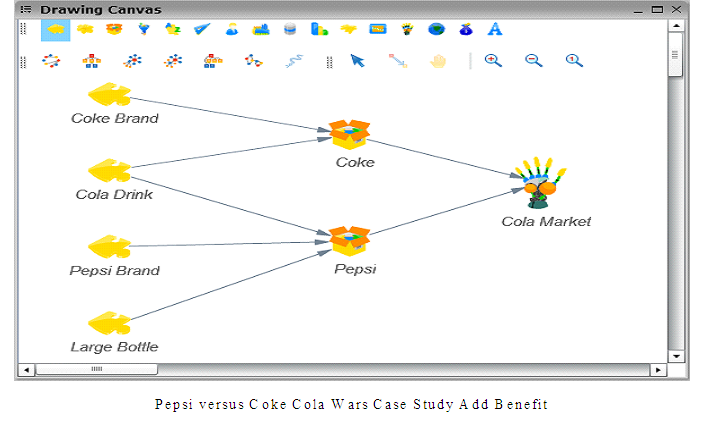 In fact, Pepsi did introduce a large 12 oz bottle early on in the Cola Wars to compete with Coke’s 6.5 oz bottle. They accompanied the new product feature with the advertising jingle “Pepsi-Cola hits the spot / Twelve full ounces, that’s a lot / Twice as much for a nickel, too / Pepsi-Cola is the drink for you”. The campaign was a huge success at the time and allowed Pepsi to double their profits.

To test whether targeting a particular market demographic would be a successful strategy, Pepsi could make this adjustment to the Market Map: 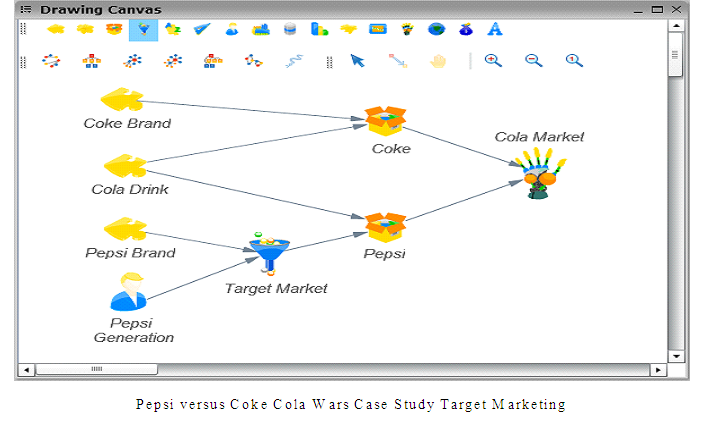 In fact, Pepsi were pioneers for niche and segmented marketing. In the 1940’s they targeted their marketing directly towards African Americans. Later they defined the “Pepsi Generation” and took a stand with the young side of the 1960’s generation gap. They described Pepsi drinkers as people who saw the “young view of things”. The “Pepsi Generation” was one of the first and best known instances of what came to be known as “lifestyle marketing”.

To test whether adjusting their product distribution strategy would be successful, Pepsi could make this adjustment to the Market Map: 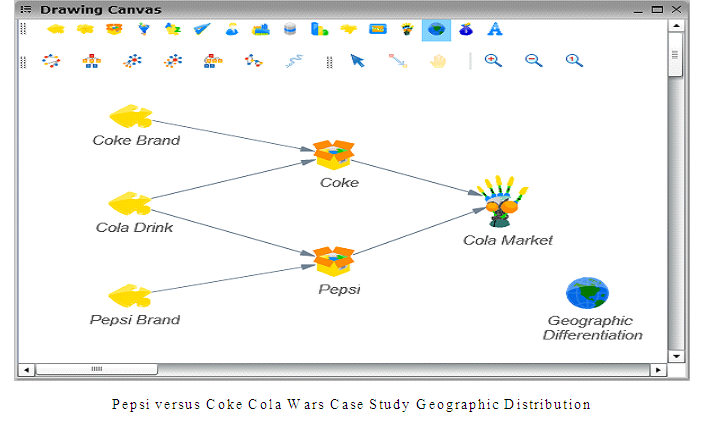 To test whether improving the perceived taste of Pepsi would be successful, Pepsi could make this adjustment to the Market Map: 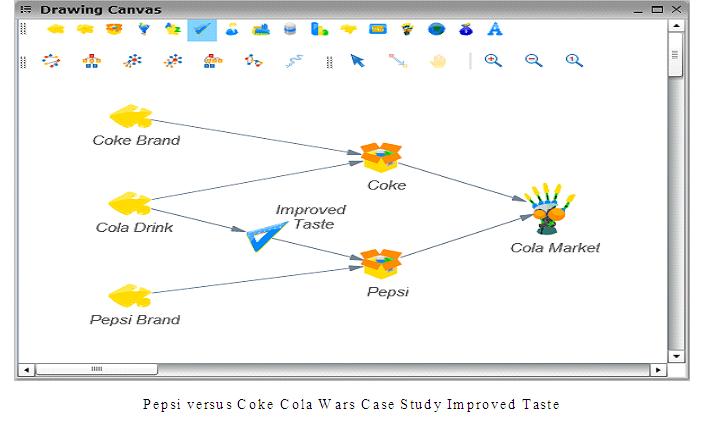 In fact the “Pepsi Challenge”, which was a market strategy centered on improving the customer’s perception of the taste of Pepsi, was another enormously successful strategy. In these televised blind-taste challenges, a Coke drinker was asked to determine whether they actually preferred the taste of Pepsi. It turns out that a statistically significant majority of Coke drinkers did, in fact, prefer the taste of Pepsi. This genuine finding, in part, led Coke to launch its unsuccessful “New Coke” strategy.

To test whether making a product line extension to the Pepsi product would be a successful strategy, Pepsi could make this adjustment to the Market Map: 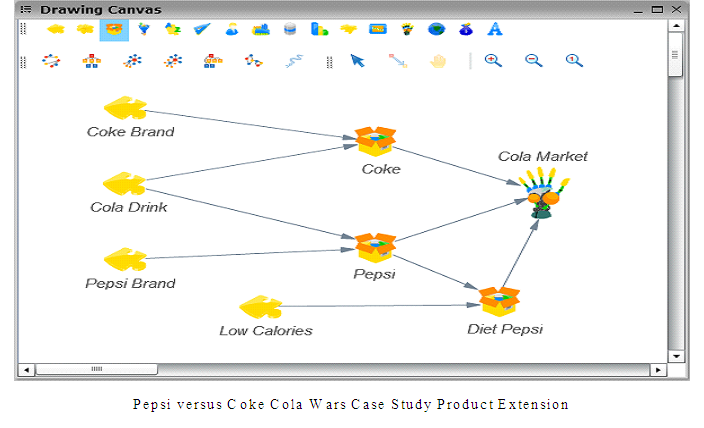 Note that the Diet Pepsi product that was added to the Market Map is just like Pepsi (it is also a Cola Drink with the Pepsi Brand) but it has the additional benefit of being low in calories.

Market Models can evolve to be increasingly complex. And they can be used to simulate very specific market phenomenon. For Pepsi, the Market Model could evolve to look something like this:

Pepsi could then evaluate whether creating a very broad product portfolio, and launching each of these products into the market over time, would be a successful strategy. A dynamic timeline might look something like this: 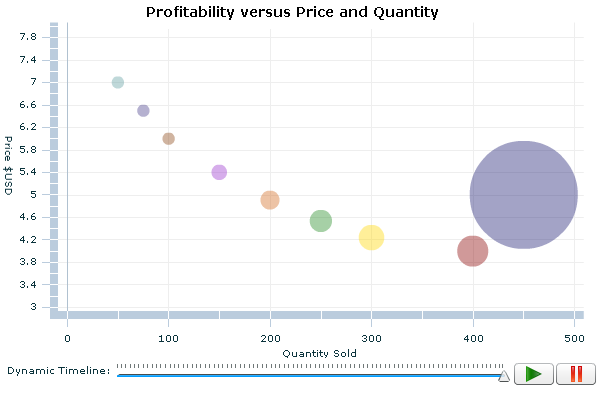 “According to the case study of coke and pepsi both of the companies have great brand in market but this  survey tells us that pepsi has a great market demand and high market shares because of its taste and market developing plans but if they follow these steps they can become more effective in markets “.