Classifications of Dams in Oman

Role and Importance of Dams in Oman

This has been observed that the natural disasters are the real threats for the different countries around the globe. The government and the different organizations have demonstrated the concerns about different hazards in form of overflow of water or floods. Thus, there is a need to contain some strategic considerations to reduce the visibility of the damage. The construction of different dam is a pertinent solution for the different countries to reduce the risk and damage in case of any natural disaster (Reliefweb.int, 2012).

Different countries contain different dams for different purposes, and the avoidance regarding the natural disaster is one of the prominent purposes. Interestingly, dams are used to store water and redistribute the water according to the need in the different areas.  In addition, despite having

In Oman, it is important to build dams because Oman is a semi-arid country where chances of floods are too high. Similarly, dams in Oman has different purposes including storing water to use it later for different reasons; most importantly, to protect Oman from floods. The government of Oman has built 135 dams in total and which include; 90 storage dams, 43 grounded water recharge dams and 2 protecting dams (Civilsolution.wordpress.com, 2012).

Classification of Dams in Oman

In Oman, there are different dams, which are categorized due to the different factors or purpose. There are three types of dams. The classification of dams in this country is as under

This is a fact that the purpose of each dam integrates with the design or shape. For Instance, to justify the different purposes, such as construction, water storage and flood prevention, this classification comes into the life. The elaboration of this classification is as under.

Classification of dam based on construction material

The dams which are made from the compacting layers of the earth are called earth fill dams. The strong substances upstream and downstream are placed for protection. The AMERAT FLOOD DAM is an example of earth fill dam in Oman (Civilsolution.wordpress.com, 2012).

A dam, which is made from concrete to manage the water pressure through the horizontal pressure, is called the concrete dam. The WADI THUMAID recharge dam is an example of the concrete dam, as walls of this dam are constructed by the concrete (Civilsolution.wordpress.com, 2012).

The parts of the dams made of steels are Crest, Parapet walls. The top of the dam structure made of the walkway approach as it happened collectively. The parapet walls maintain through the low possible material used as per requirement. The Heel known as the portion of the structure depends upon the riverbed. The material used in the Sluiceway because the opening of the dam structure is the main aspect while using the dam as per the requirements. These material and name of structures formed the earth-filled dam (Civilsolution.wordpress.com, 2012). 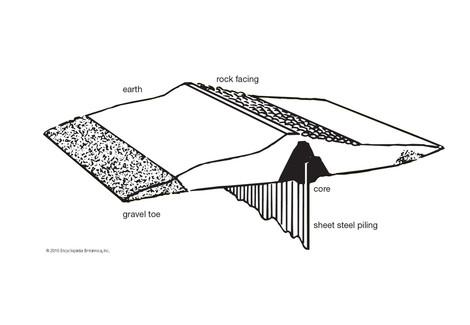 Classification of dam based on shape

The Embankment dam is made from the natural material and looks like a bank or hill. This shape of the dam is good to create a core to prevent the water flow and enhance the storage capacity (Civilsolution.wordpress.com, 2012).

The material, which is used in the construction of this dam, is concrete. However, this dam depicts the curve or arch share, pointing back in the water from the top. The arch shape helps the dam to resist or avoid the pushing force of water. The narrow steep sided valleys are quite visible in this dam. In Oman, these dams need the strong foundation of an arch and the side valleys (Civilsolution.wordpress.com, 2012).

A dam, which utilizes the stone and masonry to hold water back along with the resistance of the horizontal pressure, is called the gravity dam. The gravity dam looks like a trainable. In Oman, these dams are observed, which are controlled by the gravity. Different narrow side valleys are observed in the dams. However, there is no need of sound material or foundation for this dam (Civilsolution.wordpress.com, 2012).

The buttress dam contains the different triangular walls, and they resist the reservoir water. The watertight upstream side is also prominent. The idea behind the buttress dam is the brevity, as structure seems same, but slightly different from the gravity dams regarding the shape and the purpose (Civilsolution.wordpress.com, 2012).

Classification of dam based on purpose:

Based on purpose, the classification of dams is as under:

A dam which stops the water well behind the structure and then move into the aquifer is called Groundwater recharge dams. There are 43 of recharge dams in Oman.

For example, the WADI THUMAID RECHARGE DAM is a prominent recharge dam in Oman.  Another example is AL KHOUD RECHARGE DAM, as it contains water 5100 m. These dams are used to boost the groundwater aquifer through the flood water. Interestingly, this dam prevents the flood first and then uses its water for this purpose. In Oman, these dams are in the limelight due to the immense water storage and use it for the different purposes. The chances of the floods are high on the different alluvial valley. This is a fact that the capacity of this storage dam is high on this valley, which makes it more credible in a case of the floods. The government of Oman has constructed 43 recharge dams from 1985 to 2011. These storage dams contain the storage capacity of 95.401 million cubic meters, which is remarkably high as compared to the other dams (Waterpowermagazine.com, 2011).

A dam, which stores water through floods and rains and distribute later according to the need is called the storage dam. This dam is used as a pertinent water resource. There are 90 storage dams in this country.

The WADI DAYQAH Dam and SADDLE DAM are two examples from Oman. In Oman, the purpose of these dams is to provide the pertinent water resources for the different cities and villages. In Oman, these water resources are purposeful, especially in the mountainous areas. Astoundingly, the government of Oman prefers the small storage dam instead of constructing the big ones to contain the pertinent flow for the different regions. In JABAL SHAMS and one dam in JABAL A’SURAH, the government added two more dams in 2007, which enhanced the storage capacity. In addition, one more dam was constructed in the JABAL AL ABYADH. Thus, the total storage capacity of the dams is 231,191m3, which is quite high as compared to the other dams (Reliefweb.int, 2012). 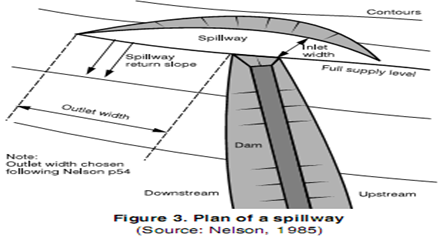 WADI DYQAH Dam is located on the eastern mountain chains in the Sultanate of Oman. The location of the dam is quite visible, as it is located among the WILAYAT QURIYAT from the east. In addition, the southern borders of the water catchment are also interacted with the dam. The benefit of the location seems high and visible, as the capacity or product is almost 35 million cubic meters per year along with the12.2% rate of return (Bhattacharjee, 2012).

This is a storage dam, which is in the limelight due to its remarkable water storage capacity for the different villages. This has been revealed that the dam is also helpful in flood prevention. The water storage is based on the floods, overflow of the water and the rains in the region. Thus, this is a multipurpose dam, which has been considered one of the biggest dams in the country.

The roller compacted concrete dam is situated on the main flow of the WADI DYQAH dam. The dam is in an arch shape and vertical front to face the reservoir (Zafar, 2013).

The roller compacted concrete is made from the concrete, which is used for protection and the pertinent flow (Zafar, 2013).

The purpose of the dam is to store the water and meet the needs of the villages and cities for both, short and long run in Oman. In Oman, this dam is in the limelight due to the immense storage capacity and the flood prevention. For Instance, in a case of any flood or overflow, this dam stores water. However, the capacity of the dam can also be increased with the passage of the time, depending on the area credibility. Thus, the dam contains the tree purposes, first is to protect from the flood. Second, it stores the record water level. Third, it distributes the water in the different areas. In addition, this has been observed that government has made these dam prominent water resources due to its capacity and the workability. This dam is purposeful regarding the water levels and the WADI FLOW, as the design and structure are suitable to contain the different water levels and enable the pertinent usage (Waterpowermagazine.com, 2011).

Following are the different hydraulic characteristics of the dam, which are quite competitive and effective to justify the purpose of this remarkable construction. In this table, the Dam length, height, Width, design, spillway, several outlets and the diameters of the different outlets are presented. This is a fact that this dam contains more productive hydraulic characteristics as compared to the other dams in the Oman (Bhattacharjee, 2012)

The list of the dam components is as under

The intake water tower controls the water discharge and consists of 11 pipes at various heights.

This dam exists on the main flow stream of WADI DAYQAH. This was constructed from Roller compacted concrete (Vale.com, 2015).

The saddle dam has been constructed depression between the two big mountains, as the purpose is to store water and avert the spill over (Reliefweb.int, 2012).

This is the most important component of the dam, as it contains the great storage capacity. The integration with the different spillways is prominent in this dam to avoid the risk of the erosion. This component helps to enhance the visibility of ground water recharge and extend the water towards the large areas (Zafar, 2013). 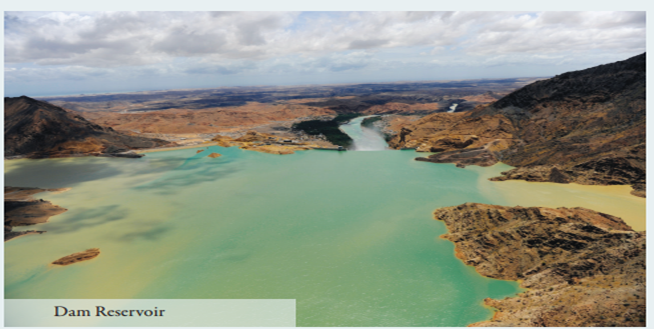 The spillways receive and discharge the flood water in an effective manner. These spillways can manage the high-water flow, especially in the lower reaches of the valley (Bhattacharjee, 2012).

This is another important component in this dam, which reduces the speed of the water (Reliefweb.int, 2012).

These can be observed on the both sides of the dam. However, in this dam, the right Dyke seem big than the left one. The basic purpose of this component is to protect the dam and discharge the infiltrated water (Vale.com, 2015).

The discharge outlets manage the flow of the water in the downstream. This component is linked with the different channels of the WADI (Bhattacharjee, 2012).

The monitoring network is an integral component, as it manages the water level, AFLAJ flow, water flow and the ground water level (Vale.com, 2015).

In end, this is to conclude that Oman has the different type of dams for different purposes. The development of the dams is in the limelight to increase the storages contain the flood prevention. In this study, we have discussed the different dam types in Oman along with the key elaboration of the WADI DYQAH Dam (Bhattacharjee, 2012).

This is high recommended that the government must have to increase the capacity of the dam with the passage of the time due to the high risk of the flood. In addition, the flood control should also be enhanced through this dam, as it is capable and credible to contain the multi functions.  This is necessary for the government of Oman to increase the spillways to reduce the risk of the flood and contain an effective flow of the water.