Child bullying is a big crime in many of the international as well as national developed and less developed countries as well. Bullying is the term that refers to the biggest loss of confidence and self-efficiency as well. Bullying is actually teasing someone in order to scare him and make them a loser. Bullying makes people less confident and very much mentally disturbed. Suppose you see your child coming home from school and you see that he or she is little disturbed and he is looking little scared as well. If he is asking more money from you in terms of his school lunch but the lunch box you will give to him comes full and even after he takes a lot of money from you still he is very much lean and slim as well in terms of his health. If he is acting little weird and scared and acting very different and confusing. Then you must not ignore him it is a sign of bullying.

“Each of us deserves the freedom to pursue our own version of happiness. No one deserves to be bullied.”

“You have power over your mind – not outside events. Realize this, and you will find strength.”

Bullying is something that makes the biller physically and mentally disturbed. Bullying makes its life difficult to pass happily and relaxing as well. Bullying is something very much dangerous for the children as they have a very soft mind and in this stage, if their soft mind gets hurts again and again in terms of bullying then it became very much difficult to help that child in becoming a successful and normal person in near future. Small age group children if caught in bullying by old age children then it became very much difficult for them to survive in their whole life without stress and tension. (EnglandStella Chatzitheochari, 2016) 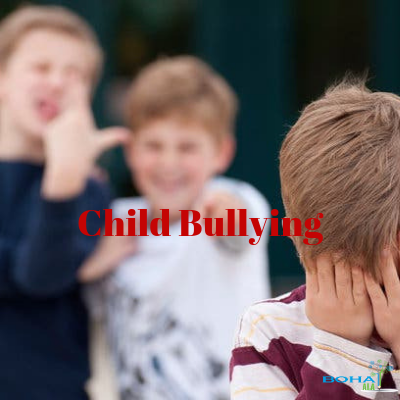 Sometimes it happens that your kid is being bullied by its senior students or its elder siblings as well. Although they are taking it as a joke that they are just kidding with their younger brother or sister, actually it is disturbing their younger siblings not only the mind but also diminishing its self-confidence as well. Bullying very much disturbed the person which is being teased by the bullying group.

Bullying is the worst and dangerous act with the victim as the victim will lose its strength and self-confidence as well.

Bullying is considering an intentional way of teasing and destroying child mental, physical and self-confident abilities. Bullying is of different types it is some time teasing to a child by calling him with different names which he does not like to hear and even spreading this name in its circle so that everyone started calling him with this name. Sometimes this names is related to its weakness which he or she uses to express in his childhood even when he was not aware of helping to resolve this issue. Now, this became a teasing factor for him. Bullying is also hitting the child again and again with a finger or slap as well. In bullying feelings of the kids who are affecting with this hurts very much and they get disturbed very much. Bullying should be considered very much seriously because of it a very damaging situation for the kids who are facing this issue because it attacks that child directly on its mental health. Bullying is of anyone it is not good to do with anyone because this will disturb the victim very much and it will losses it’s mental and health abilities as well. (Chad A. Rose, 2016)

Why kids bully with someone

Some kids that bully other kids are actually the victim of this tragedy in their childhood. Most of the elder kids use to do this because they are also suffered this issue in their childhood. They are very much teased by their elder siblings or friends or any other persons in their circle. So they are giving that back. Now they are going to tease other kids by taking revenge on them so that they can also make fun of their situation as their bullying elders will make of them. Sometimes it became a chain that goes to one another in terms of revenge from each other. Some of the bully’s victim a child and target him for bullying they first start bullying with him in terms of teasing him by calling cheap and irritating names of him. With which he get disturbs many of the times in its past. And they started calling him with the name of that activity from which he gets scared or which is his weakness. Bullying makes them happy every time.

According to a research, those children are used to do bullying with them which are scared of something or they have a phobia of something like water phobia, animal phobia and if the bullying person will let know of this then he teases his target more because of this all the time. (George G. Bear, 2015)

Bullying has too many signs than when observed carefully can easily be understood by the parents and other guardians of the family members of the children which is the bullying target. The victim will you can easily notice do not get involved with its family and other friends. The victim uses to stay alone and sometimes the victim does not even like a light in its life. The victim uses to live in the dark. Bullying is another clear form of harassment with the kids.

The victim child which is teasing by others must be carefully examined by its parents or guardians that what the victim is trying to say. Sometimes it happened that the victim cannot convey his message to its family very well because the victim sometimes very much scared of the bullying person. So in that situation, you must spend much of the time with that child and also you must listen to him calmly and with relaxation and give victim plenty of time to speak about his problem. Sometimes buys teases the victim so much that they try to commit suicide in terms of avoiding being bully by their elder’s persons in their circle. Bullying child should be taken care very much keenly so that the victim could not even try to do anything like suicide because this is very much dangerous for the future of kids. A kid is born and then brought with so much difficulty and a long process so they should not be just let go because of bullying so they should take care very much care and every single step of them should be analyzed by the parents of the victim. (Dorothy L. Espelage, 2015)

You must talk to someone who is in the family of the bullying child that why he or she is doing this. Because each of the people should try to sort out the situation in terms of just discussion with each other. They must have a talk with the bully that what makes him do this, why he is harassing that child, why he uses to make fun of him. Sometimes the bully doesn’t even know that he is bullying someone he thinks that he is just kidding and having fun with this. So when we just talk with that kid he may be aware of his habits and avoid doing it and then the bullying will stop on a positive aspect. Just having discussion will solve the problem easily. (Stopbullying.gov)

Suggestions to avoid such situation

The kid who considered being the victim of bullying should take some steps which can be helpful for the victim to stay away from this issue. He should first do not tell anyone about his secrets to which he does not know that who is she or he. He must control his anger in terms of having any fight with its elders. He must try to avoid the situation which could make its seniors in the school angry. The victim should remain brave and strong in terms of dealing and having a discussion with its seniors as well. You must tell your adults about such situation if happens with them. They must talk about it at just the start so that it cannot go longer bad or confusing or very much difficult to solve by the elders. (kidshealth.org, 2013)

Summing up all the discussion of this issue you can conclude that bullying is a very dangerous situation for the kids. The kids have a very soft mind and heart as well if they get hurt and harassed by the elders in such small age then it will badly affect their mental and as well as physical health. This loses the confidence of every child and makes him scared and confused as well. It also lessens its skills and abilities that the victim can show positively in its educational life and in its curricular activities as well. Bullying should be observed very carefully and keenly so that it can be solved properly and on its initial stage as well. Because it is not good for the future of our kids.

The Trauma of Bullying in School System