Case Study Of The Monadnock building In Chicago

Case Study of The Monadnock Building In Chicago 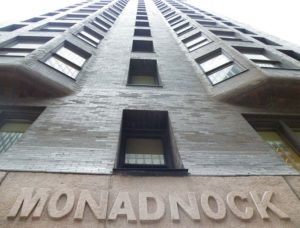 The Monadnock building, originally known as the Monadnock and Kearsarge, was built between 1889 and 1891 and is of the Richardsonian style of architecture. It was the largest commercial office building in the world at the time of its completion in 1893, erected at a cost of $2,500,000.  The building is located at 53 West Jackson Boulevard in Chicago. John Wellborn Root designed the north half along with assistance from his partner Daniel Burnham between 1884 and 1889. By the time the construction was completed, on the north half, in 1891 the building was one of the tallest buildings being constructed during that period. This is extremely notable due to the fact that the building is made out of load bearing masonry walls and is also the last skyscraper to employ this method of construction. Because of this, it can be considered the tallest load bearing masonry structure in the world. The building is sixteen stories tall and reaches a height of 215 feet.  Holabird and Roche designed the south half of the building, completed in 1893. The south addition, on the other hand, is an early example of steel-frame construction, where its underlying structure is revealed through narrow piers and wide windows. In this building there are no less than 1,600 offices and 18 passenger elevators, making it a very good example of a well thought out commercial building. The two halves of the Monadnock mark the end of one building tradition and the beginning of another.

The first discussion of plans for the Monadnock appeared in a series of letters between Peter and Shepard Brooks along with Owen Aldis from January to June of 1885. The building, in its elemental form, was an investment opportunity for this group of men in the hope that they could capitalize in the Chicago business community. Initially the proposal to buy the property was made by the Brooks Brothers in September of 1885.  Burnham and Root had completed the plans for the building the following year. However the construction didn’t begin for a number of years later. According to the architect Edward A Renwick’s report it was thought that the building was beyond the commercial urban core at the time that it was planned. “When Owen Aldis put up the Monadnock on Jackson Boulevard there was nothing on the south side of the street between State Street and the river but cheap one-story shacks. Everyone thought Mr. Aldis was insane to build way out there on the ragged edge of the city.  Later when he carried the building on through to Van Buren Street they were sure he was.” But today it is noticeable that the building is in fact in the business district of Chicago and he was not in fact “insane.” It was in fact the Brook’s brothers’ most profitable investment. The design of the building can be summed up in a paragraph written by Harriet Monroe’s in her biography of John Wellborn Root.

For this building, Mr. Aldis, who controlled the investment, kept urging upon the architects extreme simplicity, rejecting one or two of Root’s sketches as too ornate. During Root’s absence of a fortnight at the seashore, Mr. Burnham ordered from one of the draftsmen a design of a straight-up-and-down, uncompromising, unornamented façade. When Root returned, he was indignant at first over this project of a brick box. Gradually, however, he threw himself into the spirit of the thing, and one day he told Mr. Aldis that the heavy sloping lines of an Egyptian pyramid had gotten into his mind as the basis of this design, and that he thought he would ‘throw the whole thing up with out a single ornament.’  At last, with a gesture whose pretense of disgust concealed a shy experimental interest, he threw on the drawing table of Mr. Dutton, then the foreman of the office, ‘a design,’ says this gentleman, ‘shaped something like a capital I—perfectly plain building curving outward at base and cornice.  ‘This was the germ of the final design, and it provoked much study and discussion in the office.

This one paragraph embodies all that the Monadnock was to become in a few short words. Noteworthy is the movement given to the walls by the curvature inward above the first story and out again at the top with the corners chamfered off. The flared look that was given to the building is a direct aesthetic response to the differing wall thick nesses that supports the building throughout its entire height. The modern office building of the day thought of by Root and the Brooks brothers believed that it should be simple yet aesthetically pleasing. The base of the Monadnock articulates a sense of strength and stability, but the subtle reference to the Egyptian papyrus is also seen by many as a reference to the longevity and growth potential that American business has. Referring back to the fact that the south half of the building was built after the north half was completed does not necessarily mean that it is completely different but it is noticeable due partly to the method of steel frame construction employed on the southern end. Surprisingly is the way that the outside is so simple.  No stringcourse or projection breaks the continuity of line so that the tapered mass of the Monadnock building becomes its own ornament. The interior in itself is almost the complete opposite of the exterior. The building employs mosaic tile floors, ornate stairs, and also uses marble as wall covering.

The structure of the building is essentially traditional.  They employed cast iron and wrought iron framing only for the window spandrels and the internal frame. As a result the outer load-bearing wall had to be eight feet thick in the basement and six feet thick on the ground floor. All of this immense weight then rested on an iron reinforced concrete raft of a foundation. The spread footings of the foundation extended as much as eleven feet beyond the building lines into the streets surrounding the building. The engineering assistant’s calculation of the footing areas, however, proved to not be adequate enough to provide protection from settling. The building was set above grade eight inches to combat this problem against settlement, at the time of construction, but due to the immense weight and settlement the structure had settled slightly more than twenty inches in 1963, which was seventy-two years past its completion. But, at least, the settlement has been uniform, in spite the jacking up and underpinning of the east wall during the construction of the Dearborn Street subway. One of the notable things of the construction techniques employed by the builders is an early attempt at wind bracing by Burnham and Root. In the north half of the Monadnock, there is found the first attempt to use the portal system of wind bracing which has since become popular in many buildings.  An assemblage of horizontal steel beams running from the inner columns to the outer, as well as narrow “tension straps,” allowed the Monadnock the distinction of shifting less than one-half inch during some of the worst storms of the period. This distinction of being the first building using this type of wind bracing is, however, given to Jenney’s Manhattan Building, but the plans of the two structures were completed almost simultaneously. In the framing system of the Monadnock, the portal frame consists of a deep girder of I-section where the ends of which are riveted throughout the depth of the web to the supporting columns. The maximum girder depth is 15 inches. The projecting bays are carried on peripheral beams supported in turn by brackets cantilevered from the spandrel girders.

The projecting bays of the Monadnock are done in a way for the introduction of light into the office spaces in the building. The bays of the walls with their large glass area give the structure a light and open appearance in spite of its great mass and the relatively small window size. The use of load bearing masonry, which calls for extremely thick walls in the lower levels, results in decreased natural light. The problems of adequate lighting and the desire for the utmost economy of construction eventually forced the architects in this time period to turn against the masonry structure once and for all in the case of commercial buildings. This in effect tells of how the north and south ends of the Monadnock do indeed mark the end of one building tradition and the beginning of another. The Monadnock at the time of its completion was an odd looking building as compared to the rest of the cityscape. However, it was acceptable enough for Chicago, where the expression of power and utility seemed appropriate. It seems that the evident purpose of the designers of this building was to solve the problem and let the result stand. The results arrived at are, therefore, not arrived at haphazardly, but with a deliberate and conscious intention. This building in itself has no precedent in architecture so therefore it is a precedent. Yet it does have a precedent outside of architecture in the way that it comes up to an ideal, and by virtue of its correspondence with this ideal it as a building becomes a work of art.