The banking industry has been developing exponentially, especially with the increase in the use of technology within 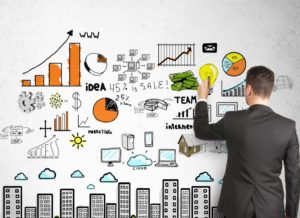 various aspects ad function of its operations. The over-reliance of technology in every other operation such as depositing, withdrawing, checking the bank balance, and also opening of bank accounts. Therefore, the project will look at the various ways in which the banking industry can come up with solutions to effectively manage the problem that has brought by the increased utilization of technology within the industry. additionally, it will look at other aspects such as the team that will be implementing the system, the assumptions, the risk that might be incurred and the goals among others. The aim will be to provide an overview of the benefits that can be realized in the implementation of the cashless system within the banking industry.

The banking industry, which is part of a nation’s economy that is charged with the responsibility of regulating, controlling as well as carrying out the financial activities such as holding deposits for individuals, carrying out investments as well as creating more wealth through loaning and interest. Despite the vibrant thriving that the industry has made, which is majorly marked by the huge profits after tax that the various banking institutions report annually, it is currently facing several threats, especially from the financial technology companies. The traditional banking culture, which enormously embraced the manual operations that involved vigorous paperwork, long queues, long procedures is being compromised by the banking services that the financial technology companies are offering currently. The banking culture is moving from the era of using physical dollar bills to make payments and purchases to an almost cashless system that entails electronic funds transfer technologies. This, therefore, is making the original players in the banking industry to face the challenge of keeping up with the traditional banking or incorporating technology into the banking halls and banking processes. Otherwise, the traditional banking culture will make many banking players get kicked out of the banking industry due to the lack of a strong competitive advantage (Martins et al., 2014).

The incorporation of technological features within the traditional banking systems will see to it that there is an increase in the efficiency and effectiveness of the services that are given by the traditional banking systems. It will focus on the reduction of the queues and paperwork by focusing on the provision of a fast and paperless form of banking, similar to the one that is provided by current financial technology. It is expected that the resulting system will be mainly cashless, increasing the security of one having to handle their own money while at the same time providing an efficient way to manage their money. Therefore, as it will be seen, the business case will be of benefit to both the traditional system and also for the customers that trust the traditional banking systems or ones that still use them to date. It will be an upgrade from what the companies and the people are used to.

Technology and its rapid development and integration into the various businesses and industries are inevitable. The solution to this problem, however, is that the banking institutions should embrace what the financial technology companies are doing. This entails the use of business systems that will help automate banking processes, provide an online based and cashless banking system. Banking systems such as the mobile banking system, online banking among others are the viable solutions currently available to the banking industry. To help solve this challenge and competition that the banking industry is facing, various technologies have been developed. Therefore, the various proposals that will see to it that the problem within the traditional banking industry include;

Industries are shifting their focus from just delivering services to ensuring that they deliver effective and reliable services. The aim is to ensure that there is perfection in each and every service provided and in order to increase that, the increasing use of technology within facilities has been used. In the traditional banking systems, technology can be seen as a necessary and required feature as the industry is facing enormous competition from various financial institutions that use the cashless technology to serve and safeguard their clients’ money. The focus here is not only in the form of payment or money handling that will be brought out by the implementation of the project, but one has to also look at the security aspect and how it will impact organization-customer relation as they introduce effective, reliable, and fast service delivers.

The project team is essential in seeing through the completion of the project to success. It will be tasked with the overseeing of the project from start to end, and it includes the following people;

The banking industry within the country is large, having more than 500 banks operating within the country (Sironi and Venzin, 2016). It is made up of both internally owned banks, and foreign-owned ones and their activities and functions are controlled by the Central Bank. The central bank is meant to regulate their operations such as the interest rates in borrowing funds to ensure that the citizens are not oppressed. With some of these banks having being opened in the 1960s and so on, they have the traditional systems, and as such, they still have queues within their premises. As such, the technological implementation will help in providing effective and efficient services to the customers and reduce the queues by introducing cashless systems.

The implementation of the proposed system will see to it that the previous system is replaced and a new and more efficient one is put in place. This will enable a more effective and efficient way of running things within banking structures. However, the process will entail certain steps and procedures that will incur certain costs such as;

The goals that will be used as the guidance tools in the introduction and implementation of the project within the banking industry include;

However, the industry made the following assumptions as far as the business case was concerned;

Despite the advantages that will be brought about by the introduction and adaptation of technology, the following are the risks that might be incurred in the implementation of the project;

The prices above can be considered as estimates that might be incurred when the bank institutions adopt technological aspects within their operations. As it can be seen, the prices of installation for both the acquiring of the equipment and the installation will range from $ 250,000 to around $600,00. However, the returns will even be greater as the revenue of the institution will increase exponentially due to the reduction of time that was previously used to serve clients which will mean that more clients will be served in a given day than before and also the attraction of new customers

Examination and evaluation of the project prior to the commencement of the implementation process is essential in order to provide a system that is reliable and valid. Additionally, it also has to be flexible to the constant changes that may occur over the years. Therefore, the project has been verified and examined thoroughly to ensure that it provides the required or expected results. As such, it only seeks approval from the top officials of various institutions in the banking industry which may include people like the Chairman of the Board, the IT manager as it will be focused mostly on the IT department, and the C.E.O.  after the implementation, it is expected that the system will commence operation immediately in any given institution.