Banana bunchy top is a viral disease caused by a single-stranded DNA virus called the Banana Bunchy Top Virus (BBTV). It was first identified in Fiji in 1891, and has spread around the world and thereafter from almost all the potential banana growing areas of the world. Recently, it has also been reported from Malawi. It has been found in many countries like Africa, Australia, Fiji, and Sri Lanka. In India, The disease is economically important in the states of Andhra Pradesh, Bihar, Uttar Pradesh and West Bengal. Due to this disease losses about rupees four corners annually in Kerala state alone have been reported. Kesavamurthy(1980) reported that more than sixty percent of the total area under rain fed crop of banana was completely damaged due to the disease in Madurai district of Tamil Nadu.

Banana bunchy top disease is caused by banana bunchy top virus (BBTV) or banana virus 1, member of lute virus group. Virus particles are isometric, non-enveloped, 18-20nm in diameter, and having dsRNA, Single stranded DNA. The aphid Pentalonia nigronervosa is the major vector which transmit the virus in a non-persistent manner. There is no sap transmission and the infected suckers are the main source of the virus for new infection. BBTV is phloem limited.

Plants become infected at any stage of growth and there are some initial differences between the symptoms produced in aphid-infected plants and those grown from infected planting material. The initial symptom is the presence of dark-green spots on the petioles, midribs, and leaf veins of the newly emerging leaves. The infected leaves are erect, narrow, stunted, and often have yellow leaf margins. The leaves become smaller as the disease progresses. The infected plants does not produce any fruit. The leaves are rosetted small with very chlorotic margin that to turn necrotic. 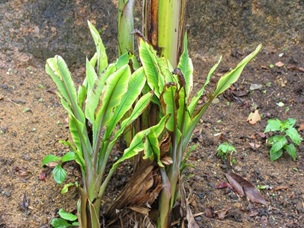 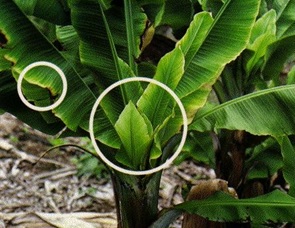 Reproduction in the banana aphid is entirely parthenogenic. Female give birth to live female young. Males are not known for the species. The life cycle is completed in 9-16 days. p.nigronervosa developed the disease on banana at 30-35⁰C.

The basic epidemiology of BBTV is simple. BBTV is the sole member of the genus Babuvirus in the family Nanoviridae. The genome of BBTV is made up of at least six circular, single-stranded DNA components, each about 1 kilo-base pair in length. Banana aphid (Pentalonia nigronervosa) transmits the virus from infected to healthy plants by feeding and in infected planting material and, in time, in its perennial host, the banana. Aphids feed on the plant phloem tissues by injecting their thin, flexible stylet into the epidermis of the plant tissue until it reaches the phloem of the leaves. Then the aphid injects saliva and sucks the cell contents. Dispersal plant to plant and over long distances and the virus has probably been introduced the most countries this way. Dispersal by aphid is essentially confined to short distances. Diseased suckers are the main source of primary infection. Vector transmission of the BBTV is circulative and non-propagative, meaning that transmission of the virus occurs from and to the phloem tissues and the virus does not replicate within the aphid’s mid gut. Acquisition of the virus by the banana aphid requires about 18 hours of feeding and then the aphid can retain the virus for approximately two weeks. The retransmission of this virus can happen after as little as two hours of feeding on a healthy plant however it takes about a month for the BBTD symptoms to appear after infection. To infect, the carrier aphid can feed on the banana plant for as few as 15 minutes, but more often a couple hours, as the longer feeding time will increase the odds of transmission.

The suckers produced on infected plants that would usually be used for planting the next season will also be diseased, which is one way the disease can spread from year to year. Banana aphids also have the capability to feed on Heliconias and flowering ginger; however, these alternate hosts of the aphid vector are not hosts of the virus. The ability of banana aphids to feed on alternate hosts is important to keep in mind when attempting to control the virus.