A Brief Wondrous Life of Oscar Wao is a book that thematically revolves around science fiction and fantasies by the main character, Oscar, which explicitly analyzes the ancestral and séance experiences by a different character. The book’s relationships depict the social diversion from normalcy, which is then followed by fantasies, the need to run away from reality after realizing the troubles associated with irresponsibility and meditation on story-telling and searching for identity machismo / masculinity and oppression in the society. The analysis and commentary for the different events, characterized by fantasies and the need to fall in love, the repercussions of the decisions the characters make, and their séance experiences and practices give the book the society reception as it depicts the lives during Rafael Trujillo’s rule.

The overarching theme is brought out in the book by incorporating both the upfront and the gradual approaches to illuminate the world that Oscar lives in and the need to create a parallel between the supernatural and the fantasy world lived by the majority of the characters. For instance, the explicit development of magical realism whereby “fuku” and “safe” were popular in significant regions of Latin America; the narration of events with the mundane tone, and the intertwining of the supernatural incidents with the tile of the book as brief and wondrous, clearly describes the different actions quite regretful, thereby setting the tone for a continuous comparison between the two internal struggles and outward concerns (McClinton- Temple, 8). The first three chapters of the book address the internal struggles of different characters, with stories tracing history in growth and development, inabilities to cope with the natural social and the cultural trend, and the discovery of the external interests of the people with whom the characters had an intimate and deeper relationship. For eg, the numerous short-term relationships that Oscar had with the girls coupled with the inability/complexity of finding love; the inability of Oscar ‘s sister, Lola, to cope with it with her ailing mother, and the struggle of their mother, Beli, right from childhood to adulthood and later in love and relationship menaces, shows the internal struggles of which the concerns are shown by close relatives (Diaz, pp7-120). The external and explicit concerns are showcased in the individual’s battle with addiction; Oscar’s battle with reality that despite being from Dominican family he could not easily find love as expected Lola’s battle with a verbally abusive relationship with her mother, and Beli’s struggle to find love which later bruised her to the point of losing her life. 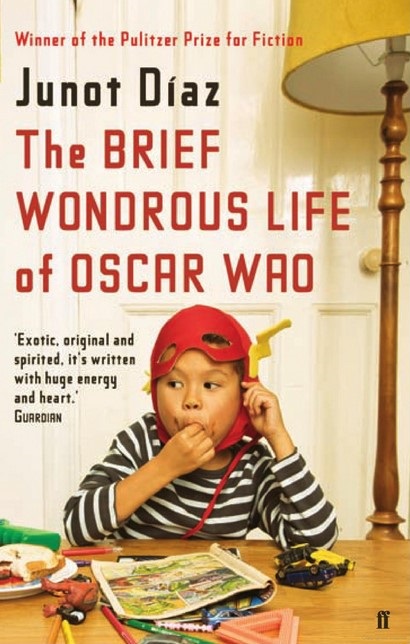 The gradual approach is brought out in the subsequent chapters, where independence and distinction of the chapters to the flow of the story are evident. The overarching theme is presented implicitly in these chapters with useful topic sentences and the structural development of events to ensure steady underlying flow and intertwining of the phenomenon whereby the relationships are explicitly shown in conclusion (Butterfield and Martin, 7). For instance, chapter four, sentimental education, implicitly defines and explains Oscar’s life in school and the internal struggles with dormitory hate and suicidal thoughts, the reappearing of the golden mongoose and the breakdown of relationships; a factor of misunderstandings and personal weaknesses, phenomenon implicitly explained regarding the first three chapters. This is later followed by explicitly defining each character’s intentions in the book in the chapters towards the end of the story and the final letter. For instance, poor Abelard, Land of the Lost, The final Voyage, The End of the Story, and the Final letter, explicitly defines the expected outcome of relationships in the first four chapters; which explicitly puts the title of the book, The Brief Wondrous Life of Oscar Wao to relevance in that, we as readers did not expect so much from a person who lived briefly in a world of fantasies and fiction as explained in the final letter.

I relate with the book, drawing much relevance in the story’s setting in line with the geographic and personal development themes brought out in the book. I am a stereotypical low-income Latino who relates in every sense possible to the magical realism presented in the book. The juxtaposition of the supernatural, the powerful, and the intangible forces brought out in the book draws much significance in the way I was brought up and the interactions I have had with my peers in the process of development. I can directly relate to Yunior’s complex character as brought out in the book in that first; I am a playboy with a big statue just like Yunior and a caring person to that fact who values human life and direction of relationships. For instance, in the book, Yunior is presented as a big guy with a big heart who in most events took care of his Friend Oscar and at some point, when Oscar was almost losing his conscious with his inability to get girls; Yunior uses his playboy traits by helping him take physical exercise through running him every day, to help him relax and minimize suicidal thoughts.

As explained before, I am a stereotypical low-income Latino. From the book, I relate directly to Yunior’s economic background. At some point, we are told that he used to room with Oscar partially due to his financial inability to afford off-campus rooms. I have a sensitive side with stereotypical believes, as depicted when Yunior tries to advise Oscar on ways to get girls. However, he stereotypically believed that Oscar was too nerdy and fat to get a girl. My nature of sensitivity can also be related to Yunior’s hypocritical demeanor when Oscar quits running, and Yunior is angry. Still, he could not openly tell him but to go behind his back and argue that he thought Oscar looked like a “Fat Homo” that made him nickname “Wao.”

The writing style in this book and the combination of literary allusions and narration help the reader comprehend and analyze the events that the writer is relaying in the novel. The use of footnotes provides historical backgrounds and additional reflective information rather than just providing factual background. Besides, the narration style gives the book the artistic combination of several central themes such as identity and the use of slang in the structural development of events that give the cultural and personal touch, attracting the reader’s attention.

As the title states, the book reflects on a brief life faced with many problems of personal struggles in a bid to realize one’s self and cope with the ever-changing environment and social phenomenon. Thematic presentation of magical realism and power of appearance gives the book a cultural stand and relevance which, coupled with the mundane tone, holistically covers the events and helps incomprehension by the reader.

7 Things You Should Know About the Eco-Friendly Bags