Home > Projects/Reports > Book Review: 1968: The Year that Rocked the World

Book Review: 1968: The Year that Rocked the World

The book, 1968: The year that rocked the world, was written by Mark Kurlansky and published by Ballantine books. The book gives an enlightening and entertaining history of 1968. Actually, Mark Kurlansky’s book exhibits the cultural life and political history characterized by social upheaval. The aim of the book was to bring out the 1968 social, cultural and political events that shaped the world.

1968 was the year that rocked the world. The year was characterized by the assassination of Bobby Kennedy and Martin lither King, the Chicago convention, Prague spring, anti war movement, the generation gap, the student rebellion that paralyzed France, birth of women’s movement, Tet offensive, and the beginning of the collapse of Soviet Union. During this year, the impact of television on global affairs was vivid and greatly influenced the political and cultural aspects of the people. Spontaneous global uprising occurred, with major impacts being felt in London, Prague, Paris, Chicago, Berkeley, and New York. Rock and roll, Drugs and sex defined people’s social lives.Generally, the book, 1968: The year that rocked the world consist of politics, economics, assassinations, youth and music, riots, demonstration and the media, and shows how the events shaped the contemporary global  political, economical, and social environment. 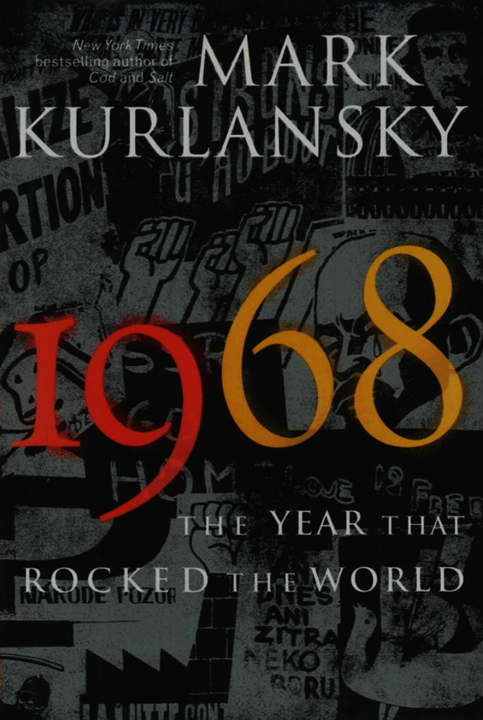 1968: the year that rocked the world has numerous themes, most of which have great connection with the contemporary economic, social and political environment. The themes of war, genocide and assassination, the media, ideological difference, and protests and riots vividly show that 1968 was the year that had a conspicuous mark in global affairs and influenced events and reforms that followed later.

The theme of war takes a center stage in Marks book. In 1968, there was the Vietnam War that was characterized by Tet offensive, one of the most unpopular wars that resulted in death of many US soldiers and millions of Vietnam civilian population. United States learnt a major strategic lesson from the war where adequate plans and sufficient intelligence in enemy’s ground is needed before engaging in any war. During this period, anti- war movement provided a route in which oppressed people, who did not know how to present their grievances, expressed their dissenting voices that resulted in constructive political organizations.

The influence of television on global events was experienced for the first time and played a key role in influencing anti war sentiments.1968 was the first global year because of instant airing of events by televisions which forced a worldwide confrontation against the events that were transpiring. People in their living rooms witnessed global events such as ending the Prague in king Wenceslas square by soviet tanks, Clubbing of students at democratic convention by Chicago police, Vietnam Tet Offensive, Athlete’s black fisted salute in Mexico city Olympics, and students and workers marching in general strike in Paris. Although dissemination of information in some countries such as the united states of America were in a transparent and democratic manner, in  some eastern block countries such as Poland ,the media did not have a freehand in airing any information as the government used repressive means to gag it and only used the media as a propaganda tools.

The year, 1968 was marked by profound ideological difference between the capitalist block and the communist block. The capitalist block was represented by United States of America while communist block was represented by Soviet Union. Kurlansky’s historic model comes from the dualistic American cold war perspective where he states that collapse of Soviet Union began in its peripheral states such as Czechoslovakia and Poland.

Protest and riots were common features in 1968.After the assassination of martin Luther king, there was an eruption of riots in African American ghettos especially on the west side of Chicago where there was widespread looting and arson. Kurlansky’s  states that Vietnam War was the greatest factor that led  to the increased number of protests and movements such as international student’s movement, anticommunist movements, burgeoning feminist movement and workers movement.

The book, 1968: The Year that rocked the world achieved its goal by presenting concrete evidence as the year that changed the economic, political and aspects of the world. Before 1968, the world was embroiled in cold war duel between communist states led by Soviet Union and capitalist state led by United States of America. It was the beginning of collapse of the Soviet Union where the peripheral states such as Poland and Czechoslovakia started to seek independence. The assassination of Robert Kennedy, who was tipped to be the next president, occurred in 1968 and this paved way for election of Richard Nixon who played a key role in ending the Vietnam War and withdrawal of United States troops in Vietnam. Furthermore the book highlights the role of the media in shaping many global issues. The emergence of television as a form of communication was important in informing the masses about the war and its effect. Actually television as a form of mass media has currently taken an important role of informing people about events that take place in the world.

In Conclusion, the book,  1968: The year that rocked the world, highlight important events of 1968 that played a great role in shaping the world. These events include the assassination of Bobby Kennedy and Martin lither King, the Chicago convention, Prague spring, anti war movement, the generation gap, the student rebellion that paralyzed France, birth of women’s movement, Tet offensive, and the beginning of the collapse of Soviet Union. The events triggered reforms in global economic, political, and social perspectives thus restoring sanity in war ravaged world.