Black spot is one of the most common and important diseases of roses throughout the world. It is caused by the fungus Diplocarpon rosae. Black spot will cause a general weakening of the plant so that progressively fewer and fewer blooms are formed if the disease is left unchecked. Plants so weakened are increasingly subject to winter injury. 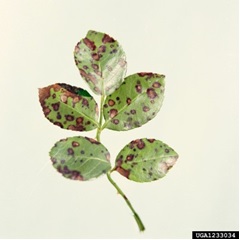 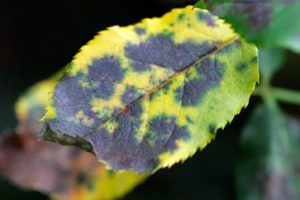 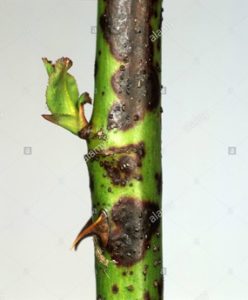 Dark-brown to black leaf spots develop on the upper leaves, which eventually become yellow and drop. Black spot can be distinguished from other leaf spot diseases by its fringed edges and dark black color. Raised, reddish-purple spots may also appear on rose canes. Warm, humid conditions favor its germination and growth. Leaves having age less than two weeks get more infected. As the name implies, infected leaves show black spots especially on the upper leaf surface. The spots can be up to 1/2 inch in diameter and typically have fringed borders. Yellowing of the leaf begins surrounding the spots and the entire leaf may yellow and eventually drop off

(Fig.3) The fungus may also infect the canes where lesions appear purple at first and later black.

As is true with most fungi, this fungus requires free water for infection to occur. The spores must be wet for at least 7 hours before they can germinate. A temperature of 65°F is best for spore germination and the disease develops most rapidly at about 75°F. Temperatures of 85°F and above inhibit the spread of the disease.

Acervuli form within two weeks of the initial infection. These structures release spores which are blown or splashed or otherwise carried to new tissues initiating new infections. The fungus survives the winter in fallen leaves and at infection sites on the canes. Spores will not survive in the soil and individual spores will not survive longer than one month. 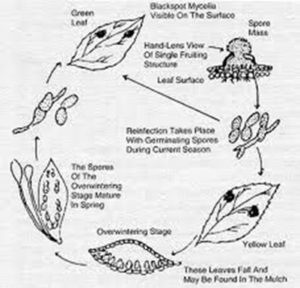 Fungus over winters on dead and fallen leaves and also remains intact with twigs and branches. Fungus produces spores in spring which get disseminated by rain splashes besides rain wind, irrigation water flow and human mismanagement.. Spores are produced throughout the growing season and cause repeated infection cycles.