In the developing countries, every year, 10 million children face mortality, out of which 60% is thought of as preventable deaths. It is said that a loss of nearly 1.3 million lives can be avoided on an annual basis by changing the current breastfeeding practices. World Health Organization and UNICEF’s joint efforts, namely the Global Strategy for Infant and Young Child Feeding, address this problem’s heart. It tries to protect these infants’ lives by reminding the world of the importance of feeding a baby human milk. (Brown and Isaacs, 2007, p.166)

The last few years have witnessed that people are becoming increasingly aware of the need to drastically change our lifestyles to lessen the existing pressures on the environment and the available stock of natural resources. One of the most ignored issues, to the health of our mother nature, is probably breastfeeding. Breast milk is one such food item which is not only renewable natural resource and is highly beneficial for the child, but also non-polluting. It does not even require any other natural resources and can be directly fed to the child. On the contrary, artificial baby food not only pollutes the environment but also depletes the existing stock of natural resources. Statistics show that every year, 1.5 million babies die because of it, and many suffer from ill-health. Therefore, whether a mother should breastfeed her child is not only a lifestyle issue but a health, social, and environmental issue. (Correa) 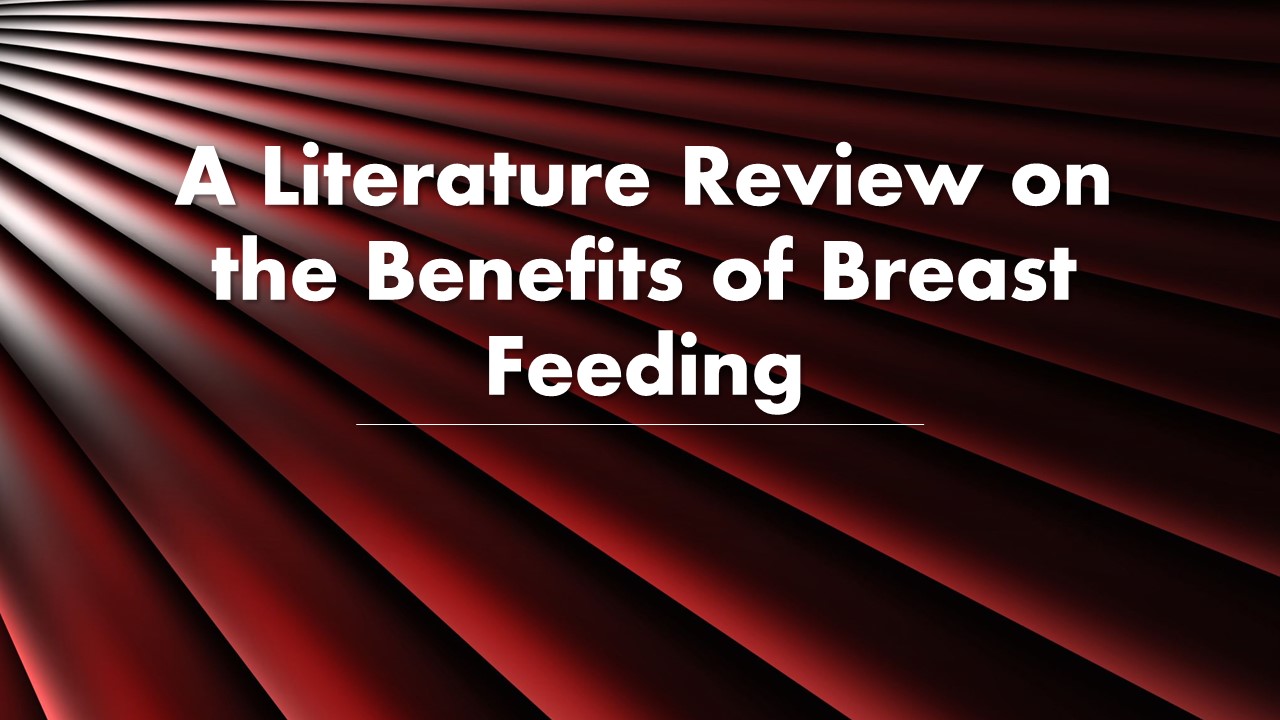 This section describes the importance of breastfeeding in ensuring the healthy development of the child. These articles enumerate that the mothers need to breastfeed their child to help him thrive and reduce the family’s medical cost. If bottled milk is replaced by breast milk, this will reduce the families’ medical expenses.

In D Michels’s article “Mother Nature Loves Breast milk,” the author has stated, “If every child in America were bottle-fed, almost 86,000 tons of tin would be needed to produce 550 million cans for a one-year formula. “(Environmental Benefits of Breastfeeding, 2011) The problem with bottle feeding, other than health issues, is the bottles, nipples, silicone, bottle feeding, … glass, etc. required for bottle feeding are resource-intensive. To make matters shoddier, they often lead to non-recyclable and non-biodegradable end products. Moreover, tests have shown that many of the top brands of baby foods contain some genetically modified components. Even the cows, whose milk is used to prepare these artificial foods, are injected with growth hormones to produce more milk. Therefore, these growth hormones also find their way into these baby foods. Mother’s milk, on the other hand, is neither genetically modified nor contaminated by growth hormones, and is, therefore, healthier for the babies. Mother’s milk also gets absorbed more efficiently than formula, as a result of which lesser excretion occurs. (Environmental Benefits of Breastfeeding, 2011)

Another matter of rising concern in today’s time is the rising cost of treatment. In the year 2009, the United States had spent around 17.6% of the GDP of the nation, which accounts for $2.5 trillion on health care. It is becoming increasingly difficult for the authorities and government alike to curb this rising cost. In this light, the police have stressed the importance of breastfeeding exclusively for the first six months and then continuing it for the next year or two as a part of a healthy diet. This will reduce the risk of diseases for the lifetime of the children and also their mothers, as a result of which, a healthier society will emerge. (Gutowski, Walker & Chetwynd, 2010, pp.2-3)

The articles in this section have enumerated the nutritional value of breast milk. It is specially composed of substances that help the baby to grow, starting from its infancy. The articles also describe the other benefits that accrue to the child from feeding on his/her mother’s milk.

The first breast milk, called colostrums, which is thick and yellow, is full of nutrition and antibodies which secures the baby from a broad range of diseases. At every feeding, the child gets a small percentage of colostrums, which is the optimal amount that the baby’s little stomach can contain. In the next 4-5 days, these colostrums transform into mature milk, which includes the right proportions of fats, sugar, protein, etc. that is essential for the baby’s growth. This milk is thinner than colostrums, but it contains the optimal amount of all the nutrients required for the baby’s development. (Why breastfeeding is important)

According to Insel, Turner, and Ross (2009), breast milk provides maximum nutrition for the baby’s growth and development. It can have no other substitute. Studies show that breast milk can cut down the incidence of “respiratory, gastrointestinal, and ear infections; allergies; diarrhea; and bacterial meningitis.” (Insel, Turner & Ross, 2009, p.537) Another study has shown that the children who have been breastfed for a more extended time have higher levels of intelligence as grown-ups. The child’s psychological development needs to have a close bond with the mother (and father). Breastfeeding results in that nearness between the baby and the mother. Human milk does not need to be prepared, i.e., heated or mixed. It is always available and ready for consumption and is, therefore, less problematic, especially when the child is hungry. (Fredregill and Fredregill, 2010, p.12) Babies who have at least been breastfed for six months have healthier and better-aligned teeth. A study conducted on 10,000 babies has shown that infants who had been breastfed needed orthodontia 40% less than children who have been raised on bottles. (Fine, Pearce & Fine, 2009, p.142)

This section highlights the role of breast milk in reducing the risk of infant mortality. The issue of infant deaths is a matter of concern in societies across the world. This section shows that babies who are regularly fed on breast milk are healthier and have a lower chance of contracting infections.

A large amount of German work published in 2009 points out that breastfeeding can reduce the risk of Sudden Infant Death Syndrome (SIDS). The researchers have concluded that if a child is exclusively breastfed for the first month, the chance of getting inflicted by SIDS goes down by 50%. The United States Centers for Disease Control and Prevention (CDC) has asked mothers to feed their babies with breast milk for as long as possible to reduce the risk of SIDS. (Lauwers & Swisher, 2011, p.317) According to Doraine Bailey, breastfeeding also finds importance in reducing the risk of obesity. A report based on 61 studies, including over 300000 participants, has proven that breastfeeding reduces obesity and overweight chances. The best results have been seen where the child has been exclusively breastfed for more than three months. (Bailey, 2007) Extensive research conducted by Oxford, Essex, and York, along with the University College London, has shown that babies who have been breastfed have lesser behavioral problems than those who have been bottle-fed. (Boseley, 2011)

Body Section Four: Benefits of Breast Feeding to the Mother and the Society

Subsection One: The Benefits of Breast Feeding to Mothers

This subsection has described the benefits accruing to the mother because of breastfeeding her child. Apart from helping the mothers to regain their original shape, breastfeeding also helps to reduce the chances of breast cancer, ovarian cancer, and osteoporosis in the mother.

Breastfeeding has many benefits for the mother as well. It can bring uterus back to the initial size as it can stimulate the contraction of uterine. If, after the delivery, the baby is breastfed by the mother, then as a result of these same uterine contractions, blood loss can be controlled. More research and studies are needed on the subject, but there is evidence that breastfeeding can reduce the chances of breast cancer, ovarian cancer, and osteoporosis. Breastfeeding can even keep in check ovulation in many women. (Insel, Turner & Ross, 2009, p.538) Breastfeeding can act as a natural means of contraception, as well. Lactational amenorrhea, as studies show, can render reasonably good protection for the first six months to pregnancy. Women who breastfeed their babies for a considerable duration may have as much as 98% guard against pregnancy. This helps in keeping a healthy gap between the birth of babies, which is essential for the health of both mother and the babies. (Littleton and Engebretson, 2002, p.968) The National Institute of Health has concluded that after going through more than 9000 study materials, mothers who do not breastfeed their children or have left breastfeeding early are the ones who have a higher risk of postpartum depression. Nursing provides relaxation to many women because nursing triggers oxytocin, a hormone that promotes relaxation and nurturing. The higher amount of oxytocin in blood also keeps blood pressure in check. (How breastfeeding benefits you and your baby, 2010) During breastfeeding, the levels of the hormone Prolactin also increase in the mother’s body. This hormone promotes the feelings of motherly love and tenderness and can decrease the chances of postpartum depression. (Black et al., 1998, p.107) Breastfeeding is active from cost-saving as well. Baby food and feeding supplies involve a reasonable cost depending on the appetite of the baby. Also, a formula-fed baby is sick more often, and this too requires cost. (Why breastfeeding is important) Breastfeeding helps a mother in regaining her prior weight quickly as it helps burn calories. It also delays the return of the menstrual period, which assists the body in retaining iron. (Why breastfeed, 2010)

Subsection Two: Benefits of Breast Feeding to the Society

The article in this subsection focuses on the benefits available to society at large, due to increased instances of breastfeeding. A more significant number of breastfeeding cases have been found to generate many positive effects on the world economy.

Breastfeeding also has positive impacts on reducing the world hunger level. If infants are breastfed, then the resources saved from this, i.e., money saved from not having to buy baby food, can be utilized by the other family members. As breastfeeding increases the birth intervals, the world population gets reduced, thereby making the limited resources available to fewer people. Breastfeeding has ecological benefits, as well. Since breastfeed babies excrete less, a lesser number of diapers are required by them. The lactating ladies also do not need sanitary napkins because they do not menstruate for a longer time. Waste of time and money, due to more visits to doctor and cost of treatment, etc. can be eliminated by concentrating on breastfeeding and not bottle feeding. (Black et al., 1998, pp.110-111)

After the above discussion, one might say that life in the 21st century has become fast-paced and technology-driven. The scarcity of time compels people to adopt time-saving techniques. Under such a scenario, even in vulnerable things such as child feeding suffers. As it has been pointed out that breastfeeding has multiple advantages not only for the baby and the mother but also for the environment. However, in most cases, ignorance has been seen, and the most immediate consequence of this ignorance is an adverse impact on the child’s health. Breastfeeding also has its economic advantages as it satisfies the child’s hunger. As mentioned before, the money that would have been spent on buying milk can now be put into alternative uses. Therefore, it can be seen that there are ample benefits to breastfeeding and should be practiced more widely.