The introduction of the euro in 1999 signaled European countries ‘ financial inclusion. Prior to its launch there were ambiguities but after the launch all the issues quickly disappeared and Euro within no time became a favorite among the citizens residing in European Countries. Approximately 320 million European people use the currency and find it incredible and useful in more than one way. Euro is used in almost all the European Countries but there are still exceptions like Denmark and United Kingdom who still use their own currencies, the British pound is used in United Kingdom and the DKK better known as the Danish Krone is used in Denmark. One of the biggest advantages of Euro is that it saves a lot of time and effort of the travelers who choose to travel with Europe. For instance if there is a Soccer game in Spain which a Greek citizen wants to witness, he/she can just straight away catch a flight and reach the Soccer stadium in Spain and watch the game. There is no need to covert the currency into some other currency. The same has resulted in saving a lot of time and effort of the European Citizens. This was not the case prior to the introduction of Euro. The people had to exchange money every now and then to meet their demands but after the introduction things have changed for better.

The implementation of Euro has brought many major changes to the European economy. The financial integrity introduced by the implementation of the euro is the most noticeable of all of them. The beneficial impacts are not limited to the economy, but also have a beneficial impact on the political climate in European nations. This document will shed light on the European single currency’s advantages and issues, which is Euro. In addition, the document will also concentrate on the effect of the current increase in the value of the Euro on other currencies. 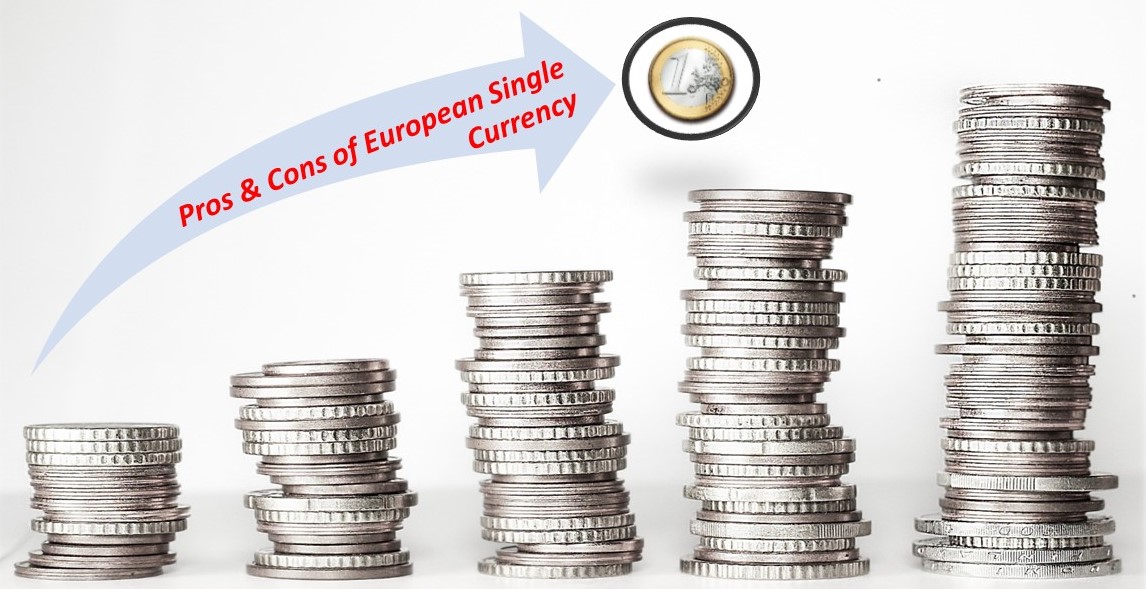 “Having a single currency and an economic and monetary union strengthens Europe’s role in international fora and organizations like the International Monetary Fund, World Bank, and Organization for Economic Co-operation and Development.” (The Euro & You). Euro strengthens the status of all European nations, having a single currency contributes greatly to the country’s development and Europe as a whole in this specific situation. Euro is very frequently used in international trade; it has very quickly become a part and parcel of the lives of many businessmen who carry out trade at large scales. Countries also have started using Euro as the currency for International trade. “A single currency makes Europe a strong partner to trade with and facilitates access to a genuine single market for foreign companies, who will benefit from lower costs of doing business in Europe.” (The Euro & You).

Another major advantage is the clarity in prices whenever an European citizen travels to another European country it becomes very easy to compare and buy the products of his/her choice; this facility was not available to the citizens prior to the launch of the Euro. Earlier even if a Tourist wanted to buy a product desperately, he/she was made to think thrice about it because of the different currencies within Europe but these days there is transparency in prices with regard to the currencies and this has only happened because of the introduction of the Euro. Euro has brought in a lot of Economic and financial stability, a Businessman is much less prone to risk when using Euro as his/her currency. Single currency keeps the inflation rate under a good check, which is extremely important for an economy and the Euro does exactly that. It keeps interest rates and the rate of inflation under check hence it can be said that the Euro plays a pivotal role in maintaining the economic growth of the European nations.

Problems of the European Single Currency

The biggest disadvantage is that it increases the financial cost of an institution in getting adjusted to the new currency. The introduction of a new currency makes the public and the private institutions spend a lot of money, for instance a lot of money is spent on office forms, bank accounts, databases etc. It also affects the cost of notes and coins but this is not as big a disadvantage as the others mentioned above. The introduction of Euro had made European nations incapable of handling asymmetric shocks. An asymmetric shock affects the members differently and there is no equality of the shock, so it is a type of a shock which affects the EU (European Union) members unequally. An asymmetric shock brings down the growth of an economy to a very low level but the same will not be seen in other European countries because the affect of the shock is unequal and it affects countries differently. Fifteen different countries using the same currency can have a very negative affect the consistency. This can be understood with the help of an example, there might be depression in one area and the people might struggle to get work, on the contrary another area in the same country can flourish without witnessing any problems of depression or unemployment. So a country is very likely to witness contrasting pictures when using the Euro as their currency. “The most frequently cited disadvantage of monetary union is the loss of national sovereignty. Transferring cash and fiscal powers from national to community level would require economically powerful and stable nations to collaborate with other, weaker, nations that are more tolerant of greater inflation.”(Pros and Cons). Another major disadvantage is the loss of Sovereignty. When there is a same currency in many neighboring countries the power from one county inevitably travels to another country resulting in the loss of the ability of the national government to control policy. Another major disadvantage is the over estimation in trade benefits, “Some economists argue that the trade and cost advantages of EMU have been grossly overestimated. There is little to gain from shifting from the current scheme, which incorporates some stability, to the rigidities that EMU would bring.” (Advantages & Disadvantages). Another major disadvantage is that tensions can flair up any moment between the European nations, who use euro as their currencies, because there would not be one political representative to present and talk on an issue, there would be many representatives and a difference of opinion would be inevitable and the same would give rise to political tension.

Investors get a lot of good stuff by using the Euro as their currency; they have more access to liquid financial markets, and they also have greater access to the same. The transaction costs of the euro-owned countries as their currency decline to a good extent. The decline in uncertainty on so many significant problems, the most significant of which is the exchange rate. So using the Euro provides transparency and an open market where there is economic integration. The European countries become more stable when they use the Euro as their currency. The finances of the European countries become more efficient and they become more equipped with regard to problem solving. All these were the most important advantageous of using a single currency. The next part of the paper will present a comprehensive view on the problems which arise on from using a single currency.

The euro zone has recently witnessed a downturn of economic activity; this is very surprising to many people. It was perceived that the credit crisis were less severe in euro zone when compared with US, none of the euro zone member countries like Spain and others never experienced any housing market problems. In spite of all this the euro zone come has come very close to recession.

“From the start of 2007 until July 2008 the euro appreciated by about 14 per cent on average against its main trading partners. This currency shock was in relation to a prolonged appreciation in the previous five years. The second shock hitting the euro zone was the doubling of crude oil prices since early 2007.” (ECB Must End Euro’s Wild Rise).

The magnitude of the exchange rate shock suffered by the Euro zone companies is no less than the oil price shock which the whole world is suffering from. The profit of the company will get severely affected by the same, the only way out is to increase the price in foreign markets. “The opposite has happened in the US since the start of 2007. The impact of the oil price shock on the profitability of export businesses was completely offset by the depreciation of the dollar, which was on average 11% against the large trading partners. The depreciation of the dollar thus enabled US export businesses to compensate for the profit squeeze arising from greater oil prices. No wonder that the US export sector is booming and the exports of the euro zone countries are stalling.” (ECB Must End Euro’s Wild Rise).

The Euro has truly become a force to reckon with, the dominance of dollar is looking under a constant threat by the Euro. Euro provides the investors with an alternative currency, “In recent decades, since the end of fixed exchange rates, there have been periods of marked dollar decline, such as the early 1970s and the mid-1980s; another one appears imminent due to our balance of payments deficits. In each case before now, the available alternative currencies—the yen, pound, and deutsche mark—all had limitations in their attractiveness, not least in their size of underlying economies and in their liquidity. No such limitations apply to the euro.” (The rise of the Euro).

The resistance and the strength of the Euro mean that the significance of the high price of import does not affect the Euro zone countries to a great extent. Even the inflation rate in the Euro Zone countries has a less impact than what it had earlier. This is because the price of petrol, grains etc are quoted in dollars which translates into fewer Euros. “On the other side, those firms that produce a big share of their income abroad see that their products and services are much more costly, at least in nations that use the dollar and other currencies. The income of these businesses is suffering and becoming less competitive.” (The Benefits and Challenges of a very Strong Euro).

Euro has become the second most widely traded currency and all this has happened with in no time. The popularity of the Euro has touched a new level. The Japanese Yen and the pound are trying to catch Euro. But it does not look likely as it is predicted that it will even surpass the Dollar and become the number one currency with regard to international trade. The global foreign exchange rate reserve has much less contribution from the Euro when compared with the Dollar. So it’s still quite premature to say that Euro will become the most traded currency very soon. The dollar is showing firm resistance and it will surely take some time for the Euro to become the most traded currency.

Determine the Amount of Sulfate by Gravimetric Method