Being a Man by Paul Theroux

“Being a Man” by Paul Theroux

Paul Theroux has marked out the negative effects of being a man. Theroux in his book ‘On Being a Man,’ he argues 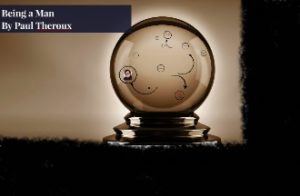 that gender expectation has oppressed a man despite living in a society where women have no much say as compared to men. According to Theroux, the gap that exists between genders is the primary cause of the social misfits in the society. Such social misfits include bad marriages, latent rapists, moral degeneration, and sadist. In his piece, Theroux argues manhood has made some men dislike being men. Some of them have disowned their identity. Theroux has “something of an objection to the way we turn boys into men.” He asserts that “the whole idea of manhood in America is pitiful.”  The idea of what makes a man has been discussed in myriad ways. There is something that men have lost in the society. However, nobody seems to know what men have lost. Some men believe that women are stealing something from men or women are convincing men in giving it away. It is common knowledge that something is wrong with men in the society, but they do not know how to go about it. Men are left casting about for answers. The gender norms in the society that young boys are expected to conform to have proved to be limiting or harmful. The traditional definition of manliness restrains many boys who want to become men.

The society considered men as a beacon of strength and leaders. In addition, they were expected to bring order in a chaotic world. Men were the rulers and were considered strong. They made laws that governed the society. The world used to be scary, and men of strength and power were required to shape it and promote peace in the society. However, the meaning of being a man has changed in the modern American society. Theroux delineates a man as “be stupid, be unfeeling, obedient, soldiery, and stop thinking.” He associates a man with fetishism. Theroux describes himself as a person who has always disliked being a man. According to Theroux, the gender constraints in the society have oppressed men making some of them reject their own identity deep inside. He believes that the version of masculinity is like putting yourself into a problem that will become part of your life. He asserts that the version of masculinity is like wearing an ill-fitting jacket for rest of one’s life. This way, he believes that being a man is oppressive that men have to bear with for the rest of their lives.

Today, the roles are murkier. It is difficult to differentiate the role of men and women in the society. Besides, there are few role models in the society. The traditional gender roles have been upended. The gender roles which were tolerated in the past have become boorish. Men were considered as patriarchs, but it has become uncommon since single mothers are raising many children. Theroux believes that the idea of manliness equals to an insult. He considers being a man as something that men should be ashamed of. During the early stages of development, men were conformed to the idea of manliness. The idea of manliness forces men to assume an insensitive role in the society.  Theroux argues that gender stereotype makes men feel obligated to masculinity just the way women are obligated to feminity.

Many men feel that they have been cast adrift because their traditional roles have been overturned. Besides, they are left with few role models to provide guidance in the society. Many of them are flailing about the definition of a man. Theroux has used the appeal of logos to describe his personal experience about being a man. People found it difficult to accept his dream of becoming a writer. He asserts that it was embarrassing since writing was considered to be womanly. This made him believe that many men discredit their gender identity and hate being men. Theroux has also used the appeal of pathos to unite the preconceived idea of gender stereotype. As a writer, he has been able to write four books and travelled to different parts of the world as part of Peace Corps. He has managed to get the readers involved emotionally about preconceived gender stereotype. Theroux has encountered people’s nuisance about the choice of his career as a writer. He asserts that “as an American writer, he has been at pains to prove his manliness.” In this way, he has struggled to prove his dominance in the society to justify his manliness. Today, some of the careers that men choose to follow are not consistent with the traditional jobs that receive less ridicule. The traditional careers that most men followed include medicine, engineering, and business. Many societies do not consider arts as a career to be pursued by men. Such men are not taken seriously. This explains what Theroux underwent when he decided to pursue writing as a career. Theroux dislikes being a man because men are denied the opportunity to enhance their career.

The exterior influences have shaped our culture. The population explosion has changed the way people think and interact. Today, the society enjoys increased safety and prosperity which have changed gender roles. Theroux has brought both sexes in the picture to unite them against the preconceived feminine and masculine stereotypes. He believes that both sexes affected by gender constructs. He asserts that “the paradox in American is that it has always been easier for a woman to write and for a man to be published.” His arguments are directed to both genders and believe that the society has become harmful. He is personally insulted by the society, and he has invoked the audience to be empathetic through his writing.

Theroux has described his thoughts and opinion to describe how he feels about being a man. According to him, it is evident that he dislikes being a man. The reader is exposed to several negative emotional responses about his feelings. Men are stereotyped in the society, and there is a way they are expected to behave to be considered manly. However, the author has much respect for women and considers their body as sacred. In spite of his thinking about men, he believes that women deserve much respect in the society. Theroux has made a lot of sense in his argument and has persuaded me that gender construct has made some men feel like they dislike being men and have rejected part of their identity.

Theroux, Paul. “Being a man.” Sunrise with Seamonsters: travels and discoveries (1986).