Analyzing Illness in Terms of One or More Theoretical Perspective

Beautiful mind is an American 2001 movie running for 135 minutes; the movie is based on the life of John Nash and 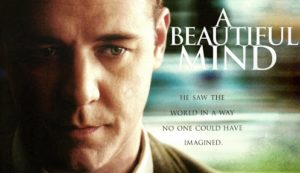 wife Alicia Nash. Through the movie, Nash is trying to cope with this mental illness that he was trying to develop, the movie starts when Nash arrives in Princeton University in 1947 with his friend Hansen for a mathematics scholarship. At the reception, Nash meets these other fellow students who also came for the mathematics scholarship and here is where he first met his roommate Herman who came to pursue literature.  Nash began fearing for his life when he witnessed a shootout between the parcher and soviet agents, this Shootout scared Nash and was undergoing a dilemma whether to stay or to flee away. Unfortunately he was gimmicked by the Parcher agents not to flee and stay to continue with his experiment, Nash was on this lecture at Harvard University, but some people who looked to him as foreign agents, on trying to escape, he punched Dr. Rosen and here he was forcefully sedated and sent to a psychiatric hospital which he believed was run by the Soviet. Unfortunately all these were happening in Nash’s imagination since he was undergoing mental illness, a condition Dr. Rose referred to as paranoid schizophrenia.

Diagnoses on mental disorder are classified by the Diagnostic and Statistical Manual of Mental Disorders, best known as DSM-IV.  This manual covers all the mental disorders for both the children and the adults, the manual provides adequate information in terms of statistics, gender, age when it’s common and prognosis. (Busfield, 2011)  Psychiatrics use this manual to better understand what type of mental illness the patient might be suffering from and some of the treatment that can well apply to their condition. DSM-IV manual assesses five dimensions, the first dimension is the clinical syndrome; this what people basically think of as the diagnosis and they can include depression, schizophrenia and social phobia. Secondly, the manual focuses on developmental disorders and personality disorders.  Developmental disorders are disorders that could be detected at a tender age and personality disorders have a prolonged symptom and encompass individual’s way of interacting with the world.  From this we realize that psychoanalytic theory of personality by Sigmund Freud has a role as far as developing some of the mental disorders are concerned. DSM-IV also provides guidelines on physical conditions, severity of psychosocial stressors and high level of functioning in mental illness diagnosis.

From the movie, one can conclude that Nash met the criteria of DSM-IV guidelines diagnosis, because Nash was in his own imaginations, things that don’t exist. For instance when Alicia rushed into the house and found her baby submerged in the bath tub, with his imagination, Nash claimed that Charles was the one supposed to take care of the baby. He further imagines that parcher wanted to kill the baby, he even rushes to keep parcher away and he unfortunately knocks Alicia and the baby. From this we realize that Nash was undergoing hallucinations and imaginations and all he was experiencing were just mental disorders, a patient who displays all such kind of signs and symptoms meets the criteria of DSM-IV and should be diagnosed according to its guidelines.

Mental illness is a condition that people develop not because they like to, but it’s because they find it happening and a good number cannot provide adequate reason for their condition. (Espejo, 2014) However, people have different perspectives about mental illnesses and in the situation of Nash from the beautiful mind movie, we realized that one perspective that contributed in his symptoms of mental illness is pressure, too much pressure and books can make someone mentally ill. We are told that Nash was so much into pressure to publish an article on a concept he developed on governing dynamics, and Nash later is offered an appointment at MIT. Nash became obsessed with assignment he was given to look for patterns in magazines and newspapers in order to detect a soviet plot, this things get deeply into Nash’s mind and the only thing he could see and think of were the Soviet. Obsessions and pressure can predispose someone to develop mental illnesses, and Nash combined the two of them, pressure to publish his article and obsession to find the plot Soviet had.

Being that Nash was diagnosed by paranoid schizophrenia, he was given a medication known as insulin shock therapy. Insulin shock therapy is a form of psychiatric medication given to patients repeatedly by injecting them with large doses of insulin to produce daily comas on patients for several weeks. The daily amount of insulin given is estimated to be 100-150 units until coma is produced, and after about 50 comas are achieved, the level of insulin is reduced slowly and then treatment stops. From the movie, Nash complains about the effect of insulin shock therapy on his body, which makes him unresponsive and lethargic and he suddenly stops with the medication. Immediately Nash did away with insulin shock therapy, he meets with parcher again in his imagination. This treatment might produce some effects on the user, for instance patients might experience decreased blood sugar level, flushing, pallor, perspiration, salivation, drowsiness or restlessness. The same form of medication that I could have recommended for Nash is the Electroconvulsive Therapy, ECT uses electric current to cause seizure on the brain, and it can be best used by the patients with bipolar disorders. ECT is not frequently used but used as last resort when other psychiatric treatments fail.

In Stanford Prison, somethings prevented the “good guards” from objecting or countermanding the orders from tough or bad guards. Things what happened in Stanford prison was like a research with a team of 24 students, where a half of the students were used as guards and the other half were used as prisoners. The ones whom were used as guards did not have any experience as wardens, and rather their leader was an undergraduate from Stanford University. Good guards who are the real wardens could not object the commands from the tough guards, the so called “bad guards” because the bad guards were undertaking experiments on the prisoners, the real wardens warn the guards who were undertaking the experiment and even their fellow wardens who accepted the offer of the kind of bad effect it could bring to prison.

Prisoners tries to work within the arbitrary prison system to effect a change within the prison, some prisoners set up the grievance committee rather than trying to dismantle or change the system through outside help. Prisoners believes that if they try to seek change through the inside solidarity by forming grievances committee, it will be effective way of exposing the harassment most of the prison wardens do to the prisoners. For instance the story from the Stanford prison, we identifies that one of the prisoner was a radical activist who wanted to expose what was taking place in the prison, and he planned to sell the story to the underground newspaper which was to expose it the entire public.

The first factor that could make a prisoner attribute a guard brutality to the guards disposition or character rather than to the situation is; when the guards violate the civil rights of a prisoner, this will indicate that the guard is not handling the situation, rather he has been influenced by his personal emotions, secondly when a  guard become so arrogant and uses some of punishment that are not recommended for the prisoners, then one can conclude that such a guard is acting out of containing the situation at hand. Conducting the study at Stanford prison was not ethical at all, first reason is that; the study violated the rights of the prisoners, we are told for them to respond to the call of nature, they had to ask permission from the wardens and it was within the warden’s jurisdiction to allow the request or deny. In fact the experiment was totally uncouth, because some of the prisoners urinated and defecated on themselves. Secondly the research was not ethical because from the story we realize that some of the prisoners were mentally disturbed, suffered from anxiety and lawlessness. (Williamson, 2007)