Barbarians at the Gate

The movie barbarian at the gate is about the leveraged buyout (LBO) this term is basically purchasing a company on private basis before its liquidation. This movie is based on a true story of a massive food and tobacco corporation named RJR Nabisco. In 1980’s Leveraged buyout going to held in the states the Ceo of RJR Nabisco Mr F, Ross jhonsan tried to do LBO himself. Although the idea was given by one of his trusted partners Kohlberg Kravis Roberts (KKR) johnsan tried to do it alone but it could not be possible so the company purchasing goes towards bidding. Johnsan placed high bid as compared to kravis but the bid was won by KKR because the bidding management came to know that jhonsan had made a wrong deal with his bidding partners, so the corporation now has a new owner names Kohlberg Kravis Roberts (KKR). 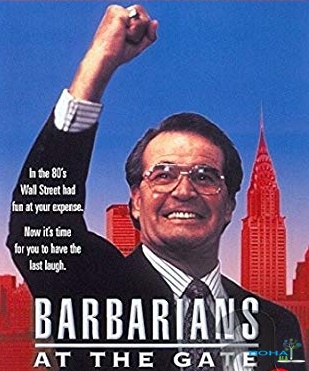 Only two participants the CEO johnsan and KKR made formal bids for the corporation. Jhonsan price for bidding from his first share to last share offer changed because he wanted to have his corporation again that’s why he increased gradually his price per share to 112$ from 75$.This video shows that it is very important for a firm to estimate it,s all costs all other expenses all the time keep an eye on that so that it may not effect on corporations work and success ways.

Financial modeling is basically to project a company’s monetary fulfilment in future which is based on the past working criteria and past achievements of the business of that company. This criteria helps a lot in business valuation process because it can help to calculate all upcoming expenses and costs as well as give some new ways to lesson expenses and costs in coming future.

Fiduciary duty is basically to act properly for someone who assigned a task to you on behalf of him/her yet the final bid from KKR was not the highest bid as compare dot the Johnson’s bid but board of directors came to know that Johnson’s have did a commitment with someone in the directors to bid him his corporation with a promise of some share in it. They did their best in sense of favoring the company because they realized that if the CEO can do anything wrong to win the bid he can for sure do anything odd to harm someone may be there decision of giving company to KKR was good for shareholders as well.

In the movie too big to fail the writer describes a financial loss condition in 2008 in banks when he tried to take a loan from banks but many banks infact all the banks where he requested for money refused his application. He did a survey off all the market and realized that the loss is reached on the last wall of street. He decided to do something to compensate it with the help of capital injections by the orders and support of higher authorities. He gets rid of this issue and also unemployment reduces due to new ways of earning introduced by him.

The relationship between the governmental agencies like SEC and Federal Reserve and the banks are according to the movie is not so good not so bad. In 2008  a time came when there came a financial crisis in the state all the banks refuses to give loans and theses agencies also stop cooperating with the citizens in terms of crisis in that time these banks and agencies do not fulfills their responsibilities properly and efficiently. The separation shouldn’t be come but it came due to financial crisis in agencies and financial deficiency leads to problems.

Ethical delimma is basically a situation to choose between two scenes of situations. The crisis is also because of joining of commercial and investment banks these two banks are both different in nature of there working and also in terms of risks. Separating these two banks can reduce the risk of repeating the crisis problem again.

After watching the movie I have learned these advises by examining his life that start as early as possible working,, save and invest an amount on regular basis and from the day you start working,, The most important never lose money and never lose this rule as well,, always keep going with the same company you start your work with or you first invested with.

Although after receiving a bachelor’s degree from university of Nebraska and a master’s degree from Colombia his certificates hanged on the wall because he is not much interested in study he was interested in  helping peoples around him whatever he do whatever degree he have he just love to help them .Learning is very important and essential element of great living standard now a days learning improves a person’s life style and thinking as well and continuous learning polishes a person totally In nearly all aspects of life.

This documentary was a great and excellent way to introduce and begin new investment course because this movie explains deeply about all the aspects that could be possibly used in investments. It consists of all the pros and corns of investment in any institution and financial agency.

Barbarians at the Gate Movie ThemeEthical DelimmaWhat is Fiduciary Duty