The Migration Act sets out the responsibility of the Refugee Review Tribunal (RRT) in a simple and precise manner – offering a review process that is just, fair, fast, and economical. In addition, the Act stipulates that the RRT should not be bound by the rules of evidence, legal forms or any other technicalities in carrying out its responsibility. The RRT should strictly operate based on substantial justice and the circumstances and merits of the case at hand. Although the legal forms or technicalities such as those dominating the Evidence Act do not bind the RRT, the common practice has seen the tribunal bound by its legal forms and technicalities. These developments arose after certain common law principles were codified in the Migration Act. These are principles touching on procedural fairness and more so the hearing rule.

The amendments to the Migration Act brought on board several provisions that require all relevant sections therein exhaustively to state the elements of the hearing rule of natural justice in light of the matter under consideration. In effecting the codification, the Memorandum attached thereto explained that the inclusions were meant to get rid of the legal uncertainties arising from the use of non-codified common law principles while not interfering with the decision-making procedures, which should be efficient, fair, and legally certain. 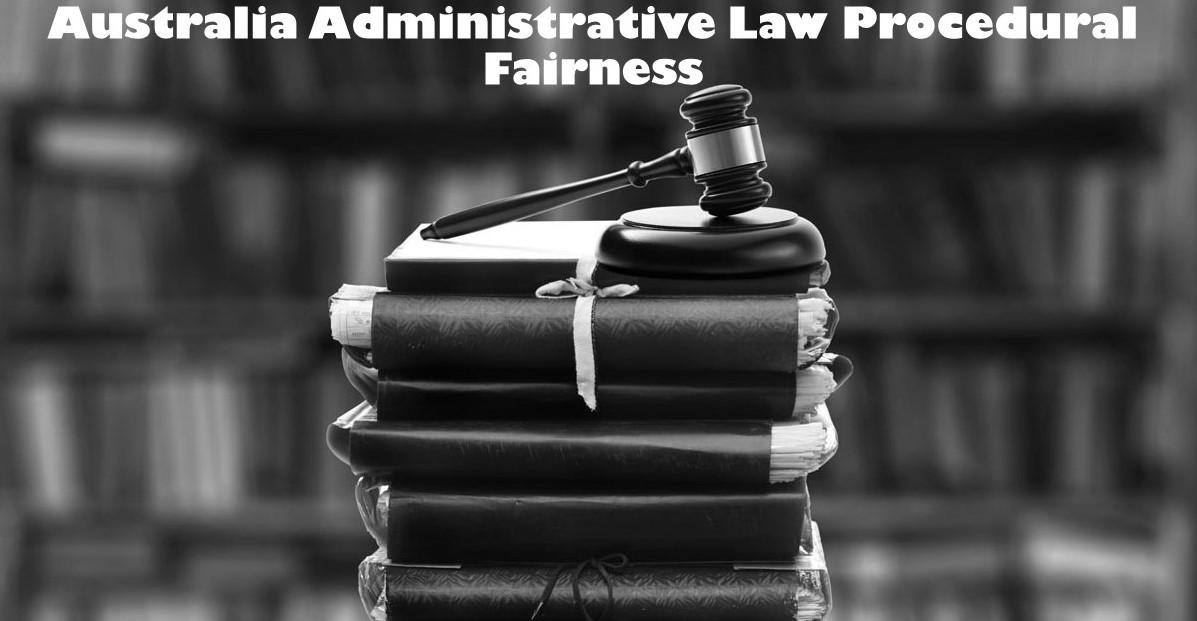 The Government of Australia in 2008 established an alternative review process to facilitate the determination of unauthorized maritime arrivals who sought review of administrative decisions that denied them the grant of protection visa. This alternative process ceased to exist in 2012. The striking thing about the review mechanism was the requirement for the application of the definitions in the Refugee Convention outlined in the Migration Act. However, this requirement did not stress the adherence to procedural fairness rules codified in the Act – the common law principles were to apply generally.

As part of the rules of natural justice, the hearing rule stipulates that any person who feels adversely affected by any administrative decision should be allowed an opportunity to be heard, be informed of the substance of their case, and be allowed an opportunity to reply to answers given by the hearing body (Banister n.d.). Going by the common law, it is not mandatory to give an oral hearing to the adversely affected person as a measure of complying with the hearing rule principle. However, the Migration Act makes it a mandatory requirement for Tribunal to give the applicant an oral hearing. The oral hearing can only be dispensed with under three circumstances. The first circumstance is where the applicant agrees not to attend the oral hearing. The second circumstance is where the tribunal can reach a decision in the favor of the applicant by relying solely on the papers. The last circumstance is where the applicant does not respond to an invitation to comment on certain information provided pursuance to the Migration Act.

The oral hearing is to be structured in a precise way as provided in the Act. The first requirement is for the hearing to be conducted in private though videoconferencing and telephone could be used where appropriate. Before the hearing proceeds, the applicant is required to take an oath of affirmation. In addition, the tribunal could bring on board an interpreter to aid the proceedings especially where the applicant speaks a foreign language not understood by the tribunal. Failure by the court to hire an interpreter or to allow the applicant enough time to make submissions or give evidence on issues touching on the matter under review is an outright breach of the obligations of hearing (Banister, n.d.).

The other power bestowed on the tribunal is to summons anyone to appear before it and produce documents. However, this authority can only be applied where the person is within the borders of Australia. The power has been exercised in most cases when the tribunal requires certain documents in the possession of the Department. Further, the applicant should be the only party to the proceedings of the tribunal. In giving evidence, the applicant is not to be represented by counsel or any other person. In addition, the applicant should not conduct any examination or cross-examination in the proceedings. These provisions eliminate legal forms and technicalities. However, it has been common for applicants to bring on board legal representatives and migration agents before the tribunal to assist them in the proceedings. A possible explanation for this is that the court recognizes that the applicant should seek assistance so that he or she can benefit fully from the opportunity to present arguments and give evidence (Banister, n.d.). Situations may arise where the applicant lacks the capacity to make sense of the proceedings and complex law and facts involved in the case.

The applicant’s counsel could help make suggestions to the tribunal about issues that ought to be brought to its attention and which the applicant does not comprehend. The counsel should do so through oral and written submissions. Where a witness appears before the tribunal, the evidence should be taken under oath or affirmation. Such a witness or legal representative cannot be examined or cross-examined by the applicant. The RRT is not an adversarial body; it is inquisitorial. Its failure to conduct an inquiry into a fact whose existence is obvious and largely linked to the results of the matter could be deemed a jurisdictional error. However, it is not the duty of the tribunal to frame the applicant’s case or modify it in any way whatsoever. The tribunal should decide the case based on the applicant’s presentation.

The High Court determined in PlaintiffM61/2010E v Cth of Australia[1] that the determination of refugee status for maritime arrivals should follow the Maritime Act in addition to the common law principles of procedural fairness. The same position was taken in SAAP v MIMIA[2]. In the latter case, the applicant was unable to read and understand English because that was a foreign language. Moreover, the applicant was in immigration detention. The tribunal put the evidence of the applicant’s daughter orally to the applicant at the hearing with the applicant’s consent. On appeal, it was held that the applicant had failed to comply with the provisions of the Act by failing to put the daughter’s evidence in writing.

The scenario provided reveals outright denial of procedural fairness as far as the hearing rule principles mentioned above are concerned. The tribunal did not adhere to its obligations under the Act, which revolve around offering a review process that is just, fair, fast, and economical. The tribunal leaned more on the meaning of refugee as applied in the refugee status determination, that is, the requirement of a well-founded fear of persecution. The determination itself is not a problem; the manner in which the determination was reached is.

Ms. Lat could have been allowed an opportunity to bring on board a legal representative owing to the fact that the matter at hand involved complex questions of law and fact. As it turned out, Ms. Lat was not endowed with the capacity to unravel the kind of proof needed for her case despite having undergone through persecution in Suma. The counsel would have availed all evidence in weighty proportions to push Ms. Lats’s case to success. In addition, the tribunal was in possession of adverse information – recent reports to the UN from an independent agency in Suma that detailed measures the Suma government had taken to protect ethnic Gonstrianians – but it did not invite Ms. Lat to respond to or comment on the same. There is minimal doubt that the trial was swayed by this piece of information in making its determination of the case.

The tribunal is inquisitorial by its very nature. It is suspicious why the member did not ask Ms. Lat anything about the persecution claims. The social and political circumstances in Suma were at the heart of the hearing, but the member ignored the same. In addition, the country information was critical to the determination of the case, but the member questioned nothing about such information. The inquisitorial nature of the tribunal becomes questionable due to such deliberate ignorance. Ms. Lat is not acquainted with the tribunal processes. Consequently, she could not know the kind of information the tribunal needed to make a fair and just determination. The situation worsens further because the Department furnished the tribunal with all relevant information it needed to determine the case.

In conclusion, the tribunal was in breach of the hearing rule principles of natural justice. The decision, therefore, should be quashed. Ms. Lat may not have proven a well-founded fear of persecution, but she deserved to be heard in a procedurally fair way. The tribunal should not have overstepped its statutory obligations in dispensing with cases in a just, fair, fast, and economical way.