Antibiotic Resistance Prevalence In The Normal And Clinical Veterinary Samples

An inevitable side effect of the use of antibiotics is the emergence and dissemination of resistant bacteria. Most retrospective and prospective studies show that after the introduction of an antibiotic not only the level of resistance of pathogenic bacteria, but also of commensal bacteria increases. Commensal bacteria constitute a reservior of resistance genes for (potentially) pathogenic bacteria. Their level of resistance is considered to be a good indicator for selection pressure by antibiotic use and for resistance problems to be expected in pathogens. Resistant commensal bacteria of food animals might contaminate, like zoonotic bacteria, meat (products) and so reach the intestinal tract of humans. Monitoring the prevalence of resistance in indicator bacteria such as faecal Escherichia coli and enterococci in different populations, animals, patients and healthy humans, makes it feasible to compare the prevalence of resistance and to detect transfer of resistant bacteria or resistance genes from animals to humans and vice versa. Only in countries that use or used avoparcin (a glycopeptide antibiotic, like vancomycin) as antimicrobial growth promoter (AMGP), is vancomycin resistance common in intestinal enterococci, not only in exposed animals, but also in the human population outside hospitals.

World wide there is growing concern about the increased prevalence of antibiotic resistance. It is now generally accepted that the main risk factor for this increase in resistance in pathogenic bacteria is the increased use of antibiotics. This has inevitable lead to the emergence and dissemination of resistant bacteria and resistance genes. This situation applies to antibiotic usage both in animals and in humans. In both populations antibiotics are used for therapy and prophylaxis of infectious diseases

Approximately 50% of all antibacterial agents used annually in the EU are given to animals . These antibiotics are not only used in veterinary indication for therapy and prevention of bacterial infections, but may also be added continuously to animal feeds to promote growth, increase feed efficacy and decrease waste production Approximately 90% of all antibiotics used for veterinary purposes are given orally to food animals like poultry, pigs and calves, mostly mixed in the feed, but sometimes poured over the feed or dissolved in the drinking water or milk. In the Netherlands, APE are included in nearly all feeds for pigs, broilers and veal calves and the amount of antibiotics used as APE is of the same size of order as that for veterinary purposes, 250 versus 300 tonnes of active drug . In other countries such as the UK the veterinary use is more than three times as high as the use for growth promotion.

Many retrospective and prospective studies have been performed to study the emergence and selection of resistance in bacteria from animals by antibiotic usage. Despite large differences in methodology, most results show that after the introduction of an antibiotic in veterinary practise, the resistance in pathogenic bacteria and:or the faecal flora increases, as in human medicine.

Some bacteria, most enterobacteriaceae, staphylococci and Pasteurella spp. become more readily resistant to certain antibiotics than others like Clostridium spp. And streptococci which are still fully susceptible to penicillin G.

Fascination with tiny microbes bearing long, difficult-to-pronounce names is often reserved for biology classrooms — unless of course the bug in question threatens human health. MRSA (methicillin-resistant Staphylococcus aureus) now contributes to more US deaths than does HIV, and as its threat level has risen, so has the attention lavished on it by the media. At this point, almost any move the bug makes is likely to show up in your local paper. Last month saw reporting on studies of hospital screening for MRSA (which came up with conflicting results), stories on MRSA outbreaks (involving both real and false alarms), and media flurries over the finding that humans and their pets can share the infection with one another. Why is this bug so frightening? The answer is an evolutionary one.

Various skin surfaces and mucosal membranes in animals including the contents of the digestive tract have a normal bacterial flora with a characteristic composition. There seems to be tissue tropism related to the bacteria in the normal flora. In general there are more Gram-positive bacteria like staphylococci and corynebacteria on the skin compared to the flora of the intestines which contains various groups of bacteria among which enterobacteria, as for instance  Escherichia coli, and various anaerobes are Gram-negative. A large part of the intestinal flora is not cultivable and knowledge of these bacteria is minimal. The composition of the normal flora may vary with the animal species, feed, and housing conditions including population density.The large intestine contains an enormous microbial population. Four hundred species or more can be detected in the microflora. The bacterial population of the large intestine comprises mainly strict anaerobic bacteria such as Bacteroides spp., Fusobacterium spp., Clostridium spp., and Peptostreptococcus spp. Facultative anaerobes such as Escherichia coli, Klebsiella spp., Enterobacter spp., and Enterococcus spp. are also present in considerable numbers.

The way of selecting normal flora isolates for further study is crucial to the results obtained. Several studies indicate that there is some degree of communication between normal flora bacteria and pathogens. This communication has so far been considered as only negative, in particular because a resistant normal flora population will probably contribute to the general increase in antibiotic resistance in bacterial pathogens. It may be speculated that a normal bacterial flora without antibiotic resistance factors and little capacity to acquire resistance genes could have a dramatically negative effect for the host animal. Large parts of such a bacterial flora could be wiped out under a regular therapeutic treatment with generally administered antibiotic drugs. As a consequence, antibiotics would not be able to be used in curing infections in animals like horses, rodents, ruminants, pigs, and probably birds because the vital normal flora of important parts of the digestive system would be destroyed for short or long periods of time. As a result, secondary infections would occur more often, requiring a greater use of antibiotics. This vicious circle may be avoided by a normal bacterial flora that is able to react with development of antibiotic resistance in response to exposure to antibiotics. According to these speculations, the potential transfer of resistance genes between normal flora bacteria and bacterial pathogens may only be considered as a sideeffect of the use of antibiotics. Considering this field of research from such a viewpoint further underlines the need to restrict the use of antibiotics in animals for only strict therapeutic purposes in settings where the risks of developing infectious diseases are reduced to a minimum. According to van den Bogaard and Stobberingh , diminishing the need for antibiotics is the only possible way of controlling the development of antibiotic resistance in large groups of animals. Improvement of animal husbandry systems, feed composition, vaccination, eradication programs for specific pathogens, and stopping the use of feed additives for growth promotion will be very important elements in reaching this goal. Van den Bogaard and Stobberingh  state that abolishing the use of antibiotics as feed additives alone will reduce the use of antibiotics in animals by nearly 50% on a worldwide basis.

All media and solutions were prepared in distilled water by the addition of specific ingredients. Agar (1.5%) was added to prepare the solid media. All medias and solutions (where required) were autoclaved, at 121°C with 15 lbs/sq.inch for 15 minutes, prior to use. All the stock solutions and working solutions were kept at 4°C. Properly washed glassware was oven dried at 70°C in hot air oven before use. Plastic ware (Eppendorfs, blue tips (1000 l), yellow tips (100 μl), and white tips (10μl) was autoclaved at 121°C with 15 lbs/sq.inch for 15 minutes before use.

Crystal violet was dissolved in absolute ethanol separately and ammonium oxalate was added in water separately. Then two solutions were mixed. Solution was filtered with the help of Whattman filter paper. Stored in dark reagent bottle.

Gram’s iodine was prepared by dissolving 10 gm of potassium iodide in 500 ml distilled water, and 5 gm iodine crystals were added and mixed thoroughly and stored in brown bottle.

For the preparation of safranin solution, 0.25gm of safranin was added in absolute ethanol. Mixed vigorously and volume was build up to 100 ml with distilled water. Solution was filtered using Whattman filter paper. Stored in dark reagent bottle.

After completion of incubation period, number of CFU’s were counted and number of bacteria per gram of the sample were estimated. Further bacterial isolates were purified by streak plate method on L.B,Mackonky & Mannitol Salt agar.Representative colonies from each plate were picked and purified by repetitive streaking until single colony was obtained.

Resistant profiling was performed to check the susceptibility of bacteria by using standard Bauer Kirby method by doing streaking on the Mueller Hinton Agar plates,antibiotic disc taken by the oxoid company,and zone sizes are interpreted by using the latest guidelines of NCCLS. 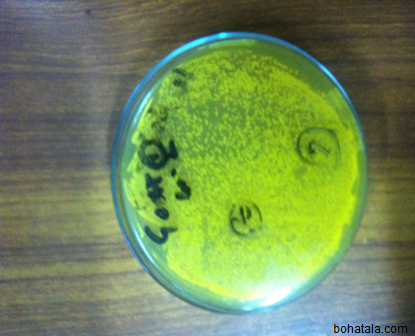 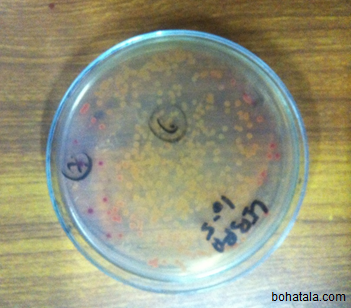 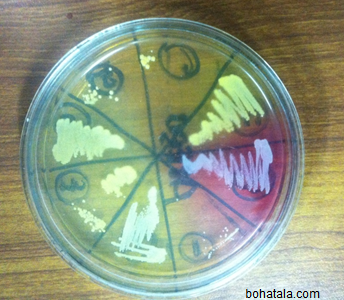 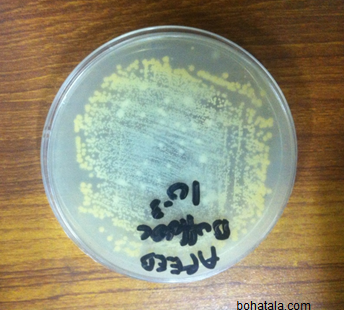 Isolation and purification of bacteria

Gram staining was performed for all the eight isolated strains. Slides were observed in compound microscope at 100X, in oil emulsion. Results observed are given in the table.

Resistant profiling was performed to check the susceptibility of bacteria by using standard Bauer Kirby method by doing streaking on the Mueller Hinton Agar plates,antibiotic disc taken by the oxoid company,and zone sizes are interpreted by using the latest guidelines of NCCLS. 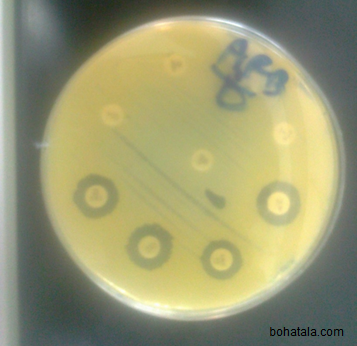 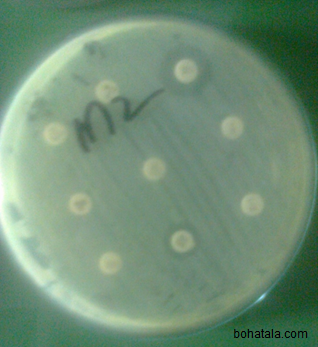 The introduction of an antibiotic not only the level of resistance of pathogenic bacteria, but also of commensal bacteria increases. Commensal bacteria constitute a reservoir of resistance genes for (potentially) pathogenic bacteria. Their level of resistance is considered to be a good indicator for selection pressure by antibiotic use and for resistance problems to be expected in pathogens. Normal and Clinical samples were collected from various animals. Prevalence and antibiotic resistance pattern is studied. We can conclude from the present study that there is a strong relation between the antibiotic resistance pattern of normal flora and pathogenic organisms of different animals. All the samples were resistant(100%) to Chloromphenicol,penicillin,sulzone,tazobactem,nalidixic acid,metronidazole,ceftriazone,fortum,cefixime,cefepime and oxacillin.Results shows the generalized enhanced resistance against almost all the beta lactamases. Starting from the basic penicillin to all cephalosporins generations that is 1st generation ,2nd generation, 3rd generation or even the 4th generation as well.even the all beta lactamase inhibitors are resistant to these i.e; clavullunic acid, sulbactem,tazocin. Even most shows bell shape pattern of ESBL.

As a consequence, antibiotics would not be able to be used in curing infections in animals like horses, rodents, ruminants, pigs, and probably birds because the vital normal flora of important parts of the digestive system would be destroyed for short or long periods of time.