Bohat ALA
Home Projects/Reports Analysis of Do Ho Suh, Cause & Effect (2007)

This work of art is a product of works on paper by Do Ho Suh, and was installed and presented by Lehmann Maupin 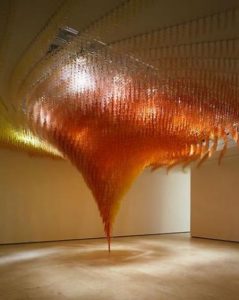 Gallery in New York. According to Lehmann Maupin review, this is the fourth solo show by Suh at the gallery.

This work explores Suh’s fractured nature of narratives, storytelling, and memories attracting his viewers to consider their psychological and physical selves with respect to the work. Sue also tries to trigger subtle dialogues around human relationships, space, and displacement. The development of this structure of spatial identity results into the Suh’s attempt with “Cause & Effect to render destiny metaphorically. (“Lehmann Maupin”)

Generally, it is accounted that ‘Cause & Effect’ arouses a vicious tornado. (Miller) According to Do Ho Suh, “the installation of this work, which is made up of about 5.5 inch-tall men hoisted in the vast ceiling is a creation of densely hung strands that support thousands of figures clad in various colors matching a Doppler reading stacked atop each other’s shoulder making it look so intently collaborated to develop a larger force. (Pinar, 2012) Suh’s focus diverts away from identity defined via spatial exploration to questioning a significant identity and its origin. He also continues to stress his observational message of the existence of strength in number. Thus, the artwork is a physical actualization of existence, which depicted strength in the presence of many people. He added that the work attempts to decipher the limitations between a single identity and also a larger group, as well as how these two conditions can coexist.” (Jobson, 2012)

Furthermore, this artwork metaphorically puts people within a complicated web of fate and destiny branching from strong idea that every human is spawned from the lives they may have lived formerly. There’s a vertical context of the figures that becomes an accumulation of ancient influences, and now begins to determine the quality of the inherent powers and strength that characterized a man. (“Lehmann Maupin”).

What are the Pros and Cons of Praying in School