The following segment is concerned with the study of the consequences of legislation.

Australia being the hottest and the driest continent on earth has been exposed to drastic changes in the climatic conditions more than any other OECD countries. The excessive temperature variations had affected the country’s agriculture which in turn had effected the food production in the country. Although a meagre amount of green house gases are emitted by the country in contrast to the worldwide share but the intensity of emission is high in terms of per capita GDP. This is largely due to the heavy dependence on the electricity sector which accounts for one third of the country’s emission. In order to rectify the problem of climate change, government ratified Kyoto Protocol in the year 2007.It is expected that the total emission of green house gases will be reduced below 60% by 2020 [1]

In order to meet this target, government has planned to go for carbon price mechanism. The objective of such a mechanism is to make the dirty energy expensive and the cleaner energy attractive. The big polluters are required to pay on the basis of every tonne of pollutant emitted by them.

The mechanism is subject to commencement from July 2012.There will be a fixed price for carbon in the first three years such as $23(1st year), $24.15 (2nd year) and $25.40(3rd year).The fixed price has been devised in order to avoid price shocks. The floor price in the first three years will be AUD15 and the ceiling price has been set at AUD20 which will be above market price. This will be done to ensure greater predictability of price .The presence of floor price also ensures the investors that the price will not fall beyond a certain level. It is predicted that the scheme will cover more than 60% of Australia’s green house gas emission. However forestry and agriculture are excluded from the scheme. Free permits will be allocated to emission prone industries that are involved in international trade[2]

In a paper presented by Antonio Cornwell and John Creedy, it has been cited that a tax on carbon emission will eventually affect fossil fuel prices and hence the consumer prices. Such a price change will then lead to alterations in the levels of final demand, use of fossil fuel and overall carbon dioxide emission[4].

An important element of this mechanism is to establish a system that would govern the dynamics of carbon price within the nation as well as achieve the goal of long term reduction in emission of green house gases.

The major thing that concerns the most is the impact of such price mechanism on the households. It has therefore been proposed that the households will be taken care of by revising the family payments, welfare and income tax scenario. Individuals with a family income of AUD65000, will be given a tax exemption of $300 whereas s families having only two children will be benefitted by $1200 every year trough tax savings as well as government payments. So it has been estimated that about two thirds of the family will be compensated[5].

Rise in the price of energy sources has a negative impact on the economic well being of a household. A part of household’s disposable income spent on energy sources increases which could otherwise be utilised for other purposes. This hampers the well being of a household. Since every household is subjected to a budget constraint, therefore households have to go for efficient budget management in order to generate resources for purchasing the energy sources whose prices tend to increase. Although the Australian government has announced tax exemptions and reliefs for low income households, but the empirical validity of such a proposal is yet to be seen in the near future. In general consensus it can therefore be said that the well being is expected to decrease.

Poor households are most likely to get effected, specially the rural households as they are mostly dependent on traditional sources of energy to meet their basic necessities. Most of the rural dwellers are ignorant of the alternative sources of energy, so they will be worst effected by such rise in energy price as compared to the urban residents. 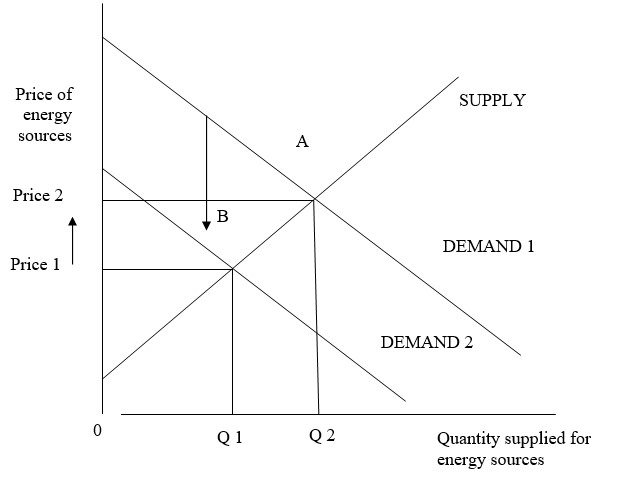 The traditional sources of energy that are used by the Australian households mainly include coal and LNG. The rise in prices of these energy sources would likely compel the households to move for alternative sources of energy. The alternative sources that can be used are solar energy, biomass energy, wind energy, wave energy and thermal energy[1]. Therefore there will be a shift in the demand patterns, as there will be rise in demand for alternative sources of energy as compared to the traditional sources. As these alternate sources of energy are renewable they are likely are to have a beneficial impact on the environment as well. The situation could be treated in a way similar to the impact on demand of a commodity when the price of its substitute good rises. Accordingly, the following demand-supply schedule could assist in representing the scenario. It shows that there is an increase in both price and demand of Carbon. 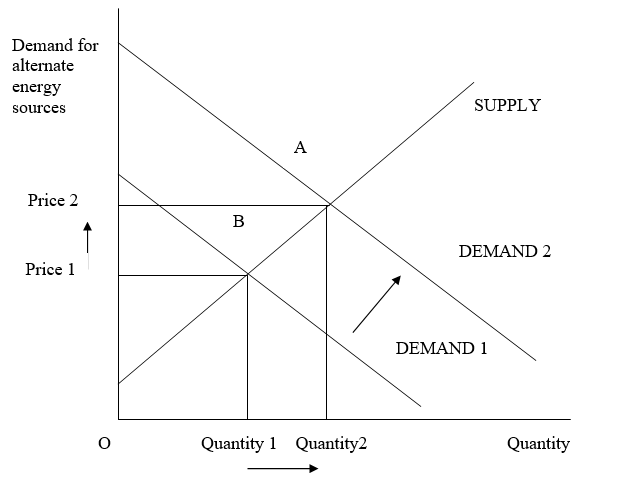 Apart from increased pension payment there are other ways in which the government increases the cash payment for the households such as providing tax exemptions, loans, guarantees and subsidies[3]. An increased budget allows the households to purchase energy resources whose prices are increasing due to carbon price mechanism. The situation could be represented with the help of a similar diagram as the above case. 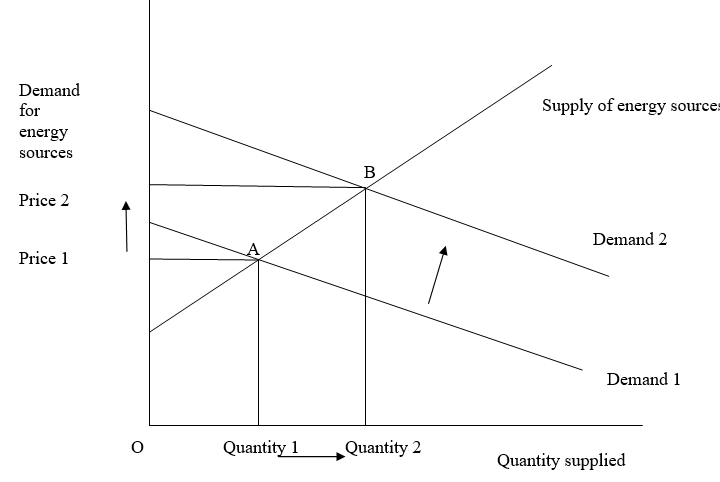 So it can be said that the economic well being, energy consumption pattern and the household budget are all going to get effected by the adoption of carbon price mechanism. Rise in energy prices will decrease the disposable income so the well being of the households specially the poor households will decrease. On the other hand increased energy prices will compel the households to move towards alternate sources of energy. Whereas with an increased government cash payment the well being is likely to increase along with an increase in household budget. Therefore the demand for energy resources will also increase.