An Analysis of Factors Influencing Adoption of Broadband Services: A Case Study of South Wales

This study will empirically investigate the factors affecting the adoption of the broadband services in United Kingdom. Computer literacy and basic infrastructure are   the critical requirements for the adoption of the technology. The diffusion or the introduction of new technology at infancy is always full of uncertainties and risks. A lot of technologies, the world does not know, emerged and failed due to the lack of adoption. Many technologies got attention and made the revolutionary changes to the world. Broadband is one of the most significant developments of last century .It has changed the business and social models to great extent. Various applications such as social websites and software have changed the way of living and lifestyle. The use of technology has become a very important part of everyday life in this era.  Use of broadband services is not only an important decision for the business enterprises but also for the household.

This study will provide insights into this important decision. Various factors which affect this decision will be empirically investigated to provide better understanding of the nature of this important decision. Existing literature provide sufficient knowledge about the product adoption and diffusion process by the consumers. Adoption of technology has some underlying factors which affect this decision making process including the knowledge of the technology and attitude toward innovative ideas. This study will highlight and investigate those factors and find out the most significant factors.

Objectives of the Study

The specific objectives of this study include:

General objectives of the study include:

Aim of the Study

The aim of this exploratory research is to provide the basis for future research in this area by providing initial understanding of broadband adoption decision.  This study will explore the behavioral, cognitive, social and financial factors with respect to the broadband services adoption. The results of this research will provide understanding about the decision process and it will help to the broadband service providers in product development and improvement. This study will enhance the knowledge about the decision making process of the broadband users.

There are several reviews of behavioral models existing but Jackson T. (2005) analysis of customer behavior is the most inclusive and reachable and the groundwork for many modern reviews. His report is an easy to get to the main drivers of behavior and hypothetical models so as to explain them.

The theory of planned behavior, technology acceptance model Davis (1989) which also usually supported the technology adoption and the flow of advance perspective serve as an excellent starting points in inspecting individual-level factors affecting the adoption of technology.

Furthermore, it is anticipated that the addition, adaption and amalgamation of strong theories will help to shed light on the deep structures of broadband adoption and present significant information to both the company that compete in the Internet market of broadband and the authorities that work at broadband diffusion.

Rogers (1983) also defines the compatibility as it is the extent to which an innovation is supposed as reliable with the accessible values.

It’s important to think that compatibility itself does not show the way to hi-tech innovation (Oh, Ahn, Kim 2003).

Perceived ease of use is the level to which the consumer anticipates the target innovative technology and perceived usefulness is the consumer particular prospect that using a precise technology that will enhance the efficiency of the consumer Davis (1989).

Perceived usefulness and perceived ease of use arbitrate the possessions of compatibility to attitude as the technology acceptance model sustain.

This study inspects individual-level issues influence the acceptance of broadband admittance technologies and the interaction between those issues.

The population of the study consists of everybody living in the area of Wales. The study is not limited to specific groups or sections of the population. The objective of this general study is to generalize the results to all of the U.K. People from all age groups, professions and different educational background have been investigated. The primary data collected from the respondents through the research instrument has been analyzed and interpreted to find out which factors have significant influence on the broadband adoption and usage decision.

Convenient sampling technique is used for collection of data from the respondents of the study. Due to the scale and scope of the study and the time constraints, the data could not be collected using the most scientific and the advanced sampling techniques. Since it is an exploratory research and it is not focused on any one segment of the population, therefore the aforementioned technique is used.

Graphical presentation of the Model 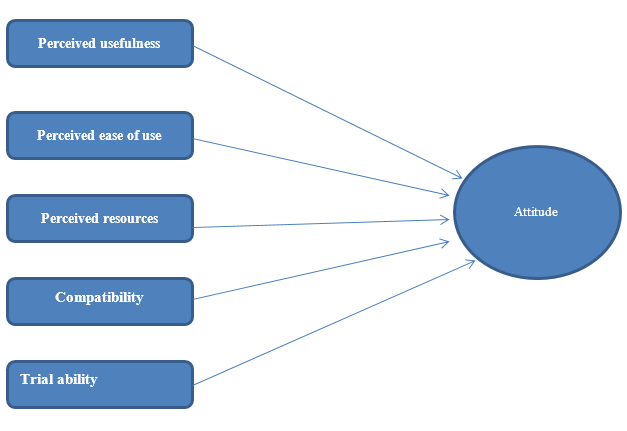 Statistical expression of the study:

Statistical expression of the study:

PES= Perceived Ease of Use

= alpha which represents constant of the equation

Using the linear regression equation, the magnitude and the nature of the relationship has been found between the dependent and independent variables. 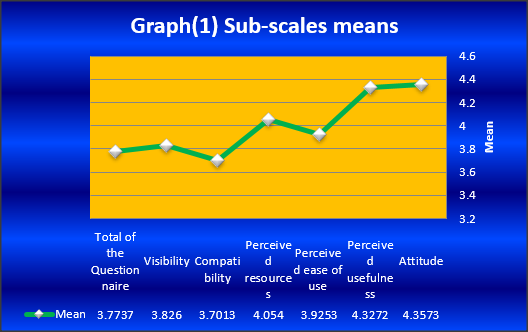 The total sample size is 250 respondents. The majority of our sample consists of the students studying in various institutions. The second largest group is professionals which are 25% of total sample. The businessmen are 23% of sample and the smallest group is housewives. The composition of the sample shows that this is a balanced sample because the majority of the broadband users are students followed by professionals and businessmen.

Out of 250 respondents majority is male which represents 62% of the total sample. Female respondents are 38%.

The summary data given below in the table indicates the normal data. The dispersion is not high and is within the acceptable range. The maximum standard deviation is found in the last variable which is visibility. The high value of the standard deviation indicates that people have different views about the visibility as the determinant of the broadband usage decision. All measures of central tendency indicate a positive attitude and strong yes to many of the questions under different variables.

It is found that the set of these six variables explains 98% variation in independent variables. The value of adjusted R Square i.e. 98% also indicates that the model is best fit. Less than 2% variation in the dependent variable is due to other factors which have not been included in the model. As per the summary statistics the model is best fit model and clear indication that the selected variables are relevant factors. In other words, it can be said that the selected factors affect the broadband usage decisions to great extent.

On the basis of the findings, it is concluded that perceived usefulness, comparability and visibility are most significant factors for broadband usage decisions. Perceived ease of use and trial ability is not significant factor in such decision. Our results are consistent with the past research and theory. Since the technology has great influence over the lives of people especially in the developed countries like U.K., people are familiar with the broadband. So ease of use and trial ability is not relevant in broadband usage decisions. The people don’t think that broadband is difficult to use therefore they are also not interested in trying the service before they start using this. Therefore, it is concluded that these two factors are not important in Wales. May be these two factors are important or have some relevance in those societies where broadband or other technologies are new phenomenon or where the computer literacy or the general literacy rate is not very high. At this point of time it cannot be said with certainty. If more research is done with reference to developing countries then on the basis of the results of those studies something can be said with sufficient certainty.

We are doing our M.S Research project at the University of Glamorgan. Please take few minutes and fill this questionnaire, we assure you that the information provided by you will be used only for academic purpose. Your cooperation in this respect will be highly appreciated.