The film, American beauty is about a depressed suburban father, Lester Burham who in a mid life crisis, resolves to change his busy lifestyle after developing infatuation for Angela, who is an attractive friend of his daughter. According to the academic fraternity, the movie has been described as satire of the middle class in America where the concept of personal satisfaction and beauty emphasizes on the exploration of sexuality, self-liberation, paternal love, romance, redemption, materialism and beauty. The clip of the movie moves excellently with the sound track thus bringing about emotions and rhythmical flow.

General Music of the Film

In this film, the rhythm and mood of the music were created using percussion instruments, whose inspiration was offered by Mendes. The color over melody, favored pulse and rhythm were instrumental in achieving the minimalistic score. Thomas Newman developed repeated phrases that were small and continuous. The percussion instruments used included xylophones, cymbals, Tablas, Bongos and Marimbas. Others that are features include world music instruments, guitars and flutes.

The soundtracks in the movie feature songs by Bobby Dain, Newman, The guess, Free Eels, Bill Withers, Peggy lee, Gomez, The Folk Implosion, and Betty Carter. Other two conversions are “because” by beetles and “Don’t let it bring you down” by Neil Young. 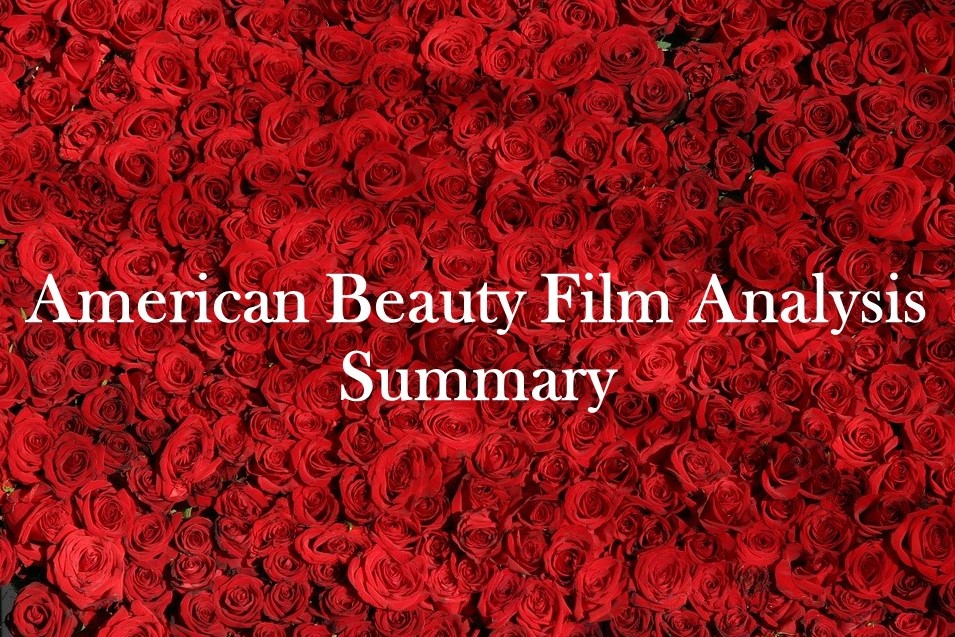 The Critical Relationship Between the Film Clip and the Music

The American beauty adheres to the conventional narrative structure, with the only exception where displacement of the opening of Ricky and Jane occurs in the mid part of the film. Rhythm of the repetition forms the principle core of the movie. For instance, there are two scenes, shot from the same angle, where Burnhams sit to have the evening meal. The two images are similar with the only difference occurring in body language and object placement, which   mirror the dynamic changes brought about by the new found assertiveness by Leister.

Lester infatuation and fixations on Angela is exhibited by a non-diegetic score that creates his fantasy’s narrative stasis. His fantasies are stressed on by repetitive and slow motion shots. While the rhythm and song” the Broadway” is sung, Leister is seen to be increasingly fixated on Angela, which highlight his fantasy for her. At this juncture, Leisters voyeuristic hypnosis is displayed when he starts to fantasize that the performance by Angela is meant for him alone. Latter on, the percussive and discordant music that is devoid of melody replaces “On Broadway” .This music is utilized as a visual cue where both the “score” and Leister stare at Angela. When the sequence ends,” On Broadway” is suddenly reintroduced.

The inclusion of pop music in the film is used to show the attempts by Leister to recapture his youth of 1960s.At this time  ,Leister listens to rock music while smoking cannabis .As such, music makes the viewers to have a close look at the contents of the film.

At the end of movie, a disturbing temple is utilized to show the visual tensions. With the exception of the song “Don’t let it bring you down” when Leister is being seduced by Angela, a clashing tone sets immediately after the end of the seduction. The lyric that entails castle burning is brought out as a metaphor surrounding the seduction between Leister and Angela and goes further to indicate American’s fantasy for beauty and false public self.

Reflection of the Music and the Film Clips

Music plays a key role in enhancing the image and mood of the film. This is essential in influencing the emotions of the audience and promoting comprehension of the plots. In the movie, American beauty, music has been well accompanied with the acts. For example, clashing tones have been used where there is tension in the film while romantic music has been used in instances where seduction was in the process. As such, both the movie and the music therein have been used excellently to enhance the plot and themes of the movie.

In conclusion, the movie has been described as satire of the middle class in America where the concept of personal satisfaction and beauty emphasizes on the exploration of sexuality, self-liberation, paternal love, romance, redemption, materialism and beauty. The clip of the movie moves excellently with the sound track thus rousing the audiences’ emotions and rhythmical flow.