Along the River During the Qingming Festival Painting Analysis

Along the River during the Qingming Festival artwork is one of the ancient China paintings attributed to the artist, Zhang Zeduan of the Song Dynasty. The artwork captures the Chinese people daily life and the capital, Bianjing landscape that is today’s Kaifang from the Song period of the Northern part. The theme of the painting often attributes to the aspect of celebrating the worldly commotion and festive spirit at the Oingming Festival (Lin 84). This is in comparison to the perspective of the ceremonial holiday including prayers and tomb sweeping. The painting successive scenes are a revelation of the lifestyle of every level in the Chinese society ranging from the poor to the rich and the different economic activities especially in the city and the rural areas (Lin 84).

The painting also offers a glimpse to the era of architecture and clothing. The painting is one of the most renowned works among the Chinese paintings and has been referable by many as the Mona Lisa of china (Lin 84).

The painting original handscroll is about 5.25 meters long and 25.5 centimeter in height. In the length, the painting has 814 humans, 60 animals, 28 boats, 170 tress, 20 vehicles, 30 buildings, and 9 sedan chairs. The densely populated and the countryside city outline the two major sections in the painting with a river meandering through the pictures entire length. The right section of the painting is the city’s rural area with two crop fields (Lin 86). The crop fields have unhurried rural folks who are predominantly goatherds, farmers and the pig herders in the bucolic scenery of the painting. The country path hat broadens into a road joins with the city road (Lin 86).

The left half of the painting is the urban area that in the long run leads into a proper city with gates. The economic activities including shops, people loading some cargo onto boats and the tax office are observable in the area (Lin 87). The painting depicts people from all the occupations including actors, jugglers, peddlers, begging, paupers, seers, and fortunetellers, monks requesting for alms, doctors, teachers, innkeepers, metalworkers, and millers. The painting also represents masons, carpenters, and official scholars from every established rank. In Along the River during the Qingming Festival painting city proper from outside separated by the left gate, business of all kinds can be seen with activities including selling grains, wine, cookware, second hand goods, lanterns, arrows and bows, and musical instruments (Lin 87).

There are also business involving gold, dyed fabrics, silver and ornaments, medicine, paintings, artifacts and needles as well as restaurants (China online museum 1). The vendors in the scene extend further along the bridge referred to as the Rainbow Bridge, which infrequently is the Shangtu Bridge. The spot where the great bridge crosses river is the major focus and center of the painting. The great commotion animates the perspective of the people on the bridge (China online museum 1). A boat as seen approaching is at an angle with the mast not absolutely lowered threatening to run into the bridge. The crowds seen standing along the riverside and on the bridge can be seen gesturing and shouting towards the approaching boat. Someone is standing near the bridge apex as seen is trying to lower a rope for the crew outstretching arms below (China online museum 1).

In addition to the diners and the shops in the painting, there are also private residences, inns, temples, official buildings and private residences varying from style and grandeur, from mansions to huts with backyards and front (China online museum 1). Commodities and people transported through various transportation modes as seen includes chariots, sedan chairs, wheeled wagons, beats of labor such as mules and a number of donkeys. The river from the painting has fishing boats with passenger carrying ferries including men pulling the larger ships at the riverbank. The details of the painting corroborate roughly through the Song dynasty writings especially the Dongiing Meng Hua Lu describing the majority of similar features of capital life (China online museum 1). 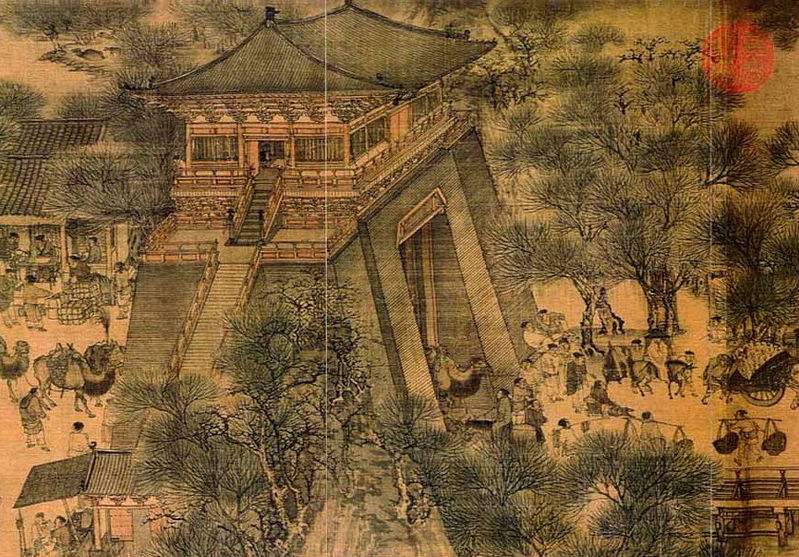 With the modern museums displaying the painting handscrolls rottenly stretching out in full length under glass cases, the original intentions for the paintings was for them to be held by viewers who would at times unroll an arms length of a section. When viewing the painting, it would be from the right end of the painting scroll progressing further to the left with the viewer determining the pace (China online museum 1). Following the use of a relative perspective, the artist who did the artwork has the ability to make everything painted seem to be closer and then recedes. A handscroll of the painting also has the ability to show similar objects from different angles through the creation of suspense moments to entice viewers to continue looking at the artwork (China online museum 1).

In one of the rarest moves, the painting first exhibition was in Hong Kong during June to mid-August 2007 exposition in commemoration of the Hong Kong’s relocation to China 10th anniversary. The estimation of the shipping costs for the painting ranges in tens of millions in Hong Kong dollars (Bowcher 209). This is with the addition of an undisclosed cost meant for insuring the priceless art piece. The exhibition of the painting during 2012 in Tokyo national Museum as the major centerpiece of one of the most special exhibitions to commemorate the 40th anniversary of the established and normal diplomatic relations between Japan and China (Bowcher 209). This is with the Japanese officials in charge of the museum providing one of the most recognized premier security standards for the artwork.

The original version of Along the River during the Qingming Festival painting celebrations is marked as one of the most famed pieces of china art from the Song Dynasty. The painting value was recognizable through most of the emperors who kept it as part of their imperial collections for centuries (Bowcher 210). As a result of its artistic reputation valued remarkably, it has drawn inspirations for several works of art over a long time. The piece of art has also managed to revive and update the original styles used in art. One of the early remakes considered, as one of the very faithful to the original piece was the product of Zhao Mengfu. This was during the Yuan dynasty with another significant remake painted at some point in the Ming Dynasty (Bowcher 210).

The remake version made during the period had a length of 6.7 meters, which was longer in comparison to the original version of the painting.  The artwork replaced much of the scenery during the Song Dynasty basing on the contemporary customs and fashions through updates of the vehicles styles including carts and vehicles and characters way of life (Bowcher 219). The wooden bridge of the Song undergoes replacement in the remake of Ming with a stone bridge. The stone bridge arc is taller compared to the wooden original with an aspect of reinterpretation of the boat on course to crush being under methodical guidance through ropes under the bridge.

The boat being pulled by the men ashore is to run into the bridge with the rest of the larger boats waiting for their turn dutifully and undisturbed (Bowcher 219). Another version of the painting by the painters of Qing Dynasty court presented to the Emperor Qianlong and later transferred along with other vital artifacts to Taipei national Palace Museum in 1949 was remarkable.

As one of the most celebrated artistic creations in china, the piece has been under admiration with court artists of the following dynasties making several versions with re-interpretive efforts. This is with each following the course of the painting overall composition and preserving the original theme with slight difference in techniques and details. Qingming scroll over the years has been under private ownership severally as part of valued collections. The painting was once part of the favorite collection of Puyi the emperor who had the original Song Dynasty with him when leaving Beijing. The Qing version and the Song Dynasty in Taipei Palace and Beijing museums correspondingly have values as national treasures exhibited majorly during brief yearly exhibitions.