Home > Projects/Reports > Allegory and Hyperbole in Idylls of the King

Allegory and Hyperbole in Idylls of the King

Idylls of the King is a collection of twelve poems written by Alfred Tennyson. The series of poems were published between 1859 and 1885. The poems present a story of the rise and fall of King Arthur’s Kingdom (Sherwood, 2013). They portray the love that the legend, King Arthur, had for Guinevere and explain how the woman eventually betrayed the king. Generally, the collection of poems recounts Arthur’s attempt to build a perfect kingdom through lifting up mankind his failure to achieve the plans and his eventual death at the hands of a traitor called Mordred (Sherwood, 2013). In the series of poems, Tennyson uses frequently allegory and hyperbole to express ideas and concepts.

Allegory refers to the use of characters, objects or symbols in a narrative that represent meanings that lie outside the narrative. In the Idylls of the King, Tennyson describes King Arthur as a “stainless gentleman” and an “ideal manhood closed in real man” (Tennyson, 2010). Tennyson uses the phrases to represent his perception of an ideal Victorian state. Further, Tennyson uses the relationship between Arthur and Guinevere to represent the idea of courtly love in the Victorian society. Guinevere’s betrayal of the king is used to represent social conflicts in the Victorian state (Sherwood, 2013). 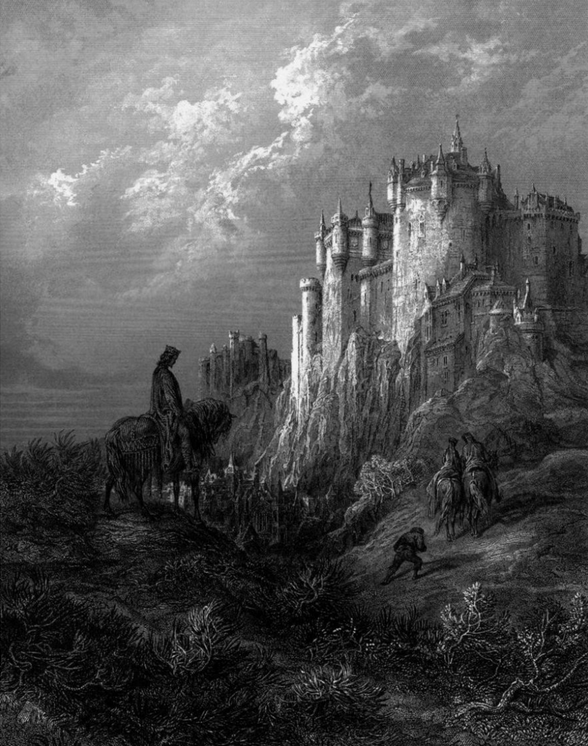 On the other hand, hyperbole simply refers to the exaggeration of an issue to heighten the effect. An example of hyperbole in Idylls of the King is “Why then let men couple at once with wolves?” Tennyson used the word wolves to refer to bad women whom men were making courtship within the Victorian society (Tennyson, 2010). Further, Tennyson uses the phrase “hissing like a serpent” to describe Pelleas’ despair after he was betrayed by a woman called Ettarre. Tennyson explains that when Pelleas sees Ettarre sleeping with another man, “he withdraws like a hand that pushes through the leaf” (Tennyson, 2010). In short, there are numerous cases in Idylls of the King where Tennyson has used allegory and hyperbole.