Alexander Fleming And Discovery of Penicillin

Alexander Fleming, a third born of four was born on 6th August, 1881 at a farm called Lochfield near Darvel in Ayrshire, Scotland. His father Hugh Fleming who lived from 1816 to 1888 was a farmer and was married to Grace Stirling Morton, a neighboring farmer’s daughter. Grace the mother of Fleming, lived between the years 1848 and 1928. At the death of Hugh Fleming, Alexander fondly known as Alec was seven years old. Fleming attended the Loudoun Moor School and the Darvel School where he rightfully earned a two years scholarship to Kilmarnock Academy (Macdonald, 2002). Later on he relocated to London and joined the Royal Polytechnic. At the age of twenty, and having worked in a shipping office for four consecutive years, Fleming was lucky to inherit some money from his uncle John Fleming. Tom, Fleming’s elder brother, being a physician greatly influenced his younger sibling’s decision to venture into a career in medicine. He consequently joined the St Mary’s Hospital Medical School in Paddington where he worked with zeal and zest and managed to graduate with a distinction degree in MBBS in the year 1906 (Macdonald, 2002).

From 1900, Alexander Fleming had been a clandestine in the London Scottish Regiment of the Volunteer Force. Being a dedicated member of the rifle club at St Mary’s Hospital Medical School, the club captain managed to persuade him to join the research department so that he could retain him in the club. His hard work ensued his appointed to being the assistant bacteriologist to Sir Almroth Wright, a pioneer in immunology and vaccine therapy. In 1908, Fleming managed to get a Bachelor of Science degree with Gold Medal in the field of Bacteriology and commenced to be a lecturer at St Mary’s for the next six years. Towards the end of 1915, he married Sarah Marion McElroy of Killala, County Mayo, Ireland who was a trained nurse (Macdonald, 2002). During the First World War, Fleming served as a captain in the Royal Army Medical Corps where he provided his services in battlefield field hospitals at the Western Front in France. However, in 1918, he went back to St Mary’s Hospital and his outstanding performance resulted to his election as a professor of Bacteriology of the University of London in 1928 (Maurois, 1959). Before his death on 11th March 1955, Fleming was a biologist, botanist and pharmacologist who wrote numerous articles on chemotherapy, bacteriology and immunology. His researches culminated in his discovery of enzyme lysozyme and the antibiotic matter penicillin from the mould penicillium notatum in the year 1928. This particular discovery led to his award of Noble Prize in Physiology together with Ernst Boris Chain and Howard Florey (Maurois, 1959). 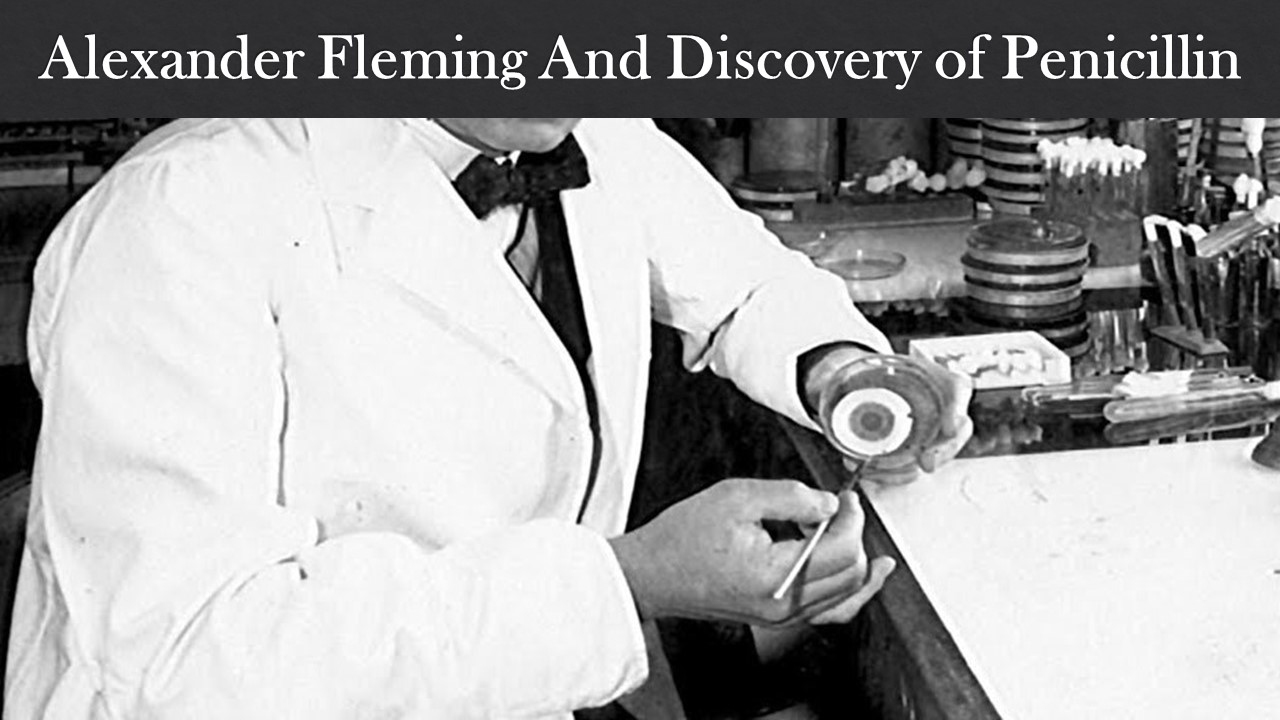 During the First World War, Fleming was intrigued by the death of very many soldiers from sepsis which resulted from infected wounds. He realized that antiseptics killed most of his patients’ immunological defences much more efficiently than they did the attacking bacteria. This prompted him to embark on the search for anti-bacteria agents. From his own glass blowing skills, Fleming submitted a medical journal; The Lancet, during the war which described a resourceful experiment which elaborated on why antiseptics were killing most of the wounded soldiers than the infection itself. He explained that antiseptics were effective on the surface but deep wounds denied them access to the anaerobic bacteria. Instead, the antiseptics in this case removed the useful agents produced to protect the patient as effectively as they did the bacteria on the surface and left the out of reach bacteria to thrive. Despite Almroth Wright’s support however, physicians continued to use the antiseptics during the war (Maurois, 1959).

Fleming continued to investigate the characteristics of staphylococci and by 1927; he was a renowned researcher although his laboratory was always untidy. Upon returning to his laboratory from a family holiday in 1928, he realized that one culture of staphylococci left on the bench was infected with fungus and the surrounding colonies of staphylococci had been destroyed while the far away colonies were not affected. He then decided to grow mould in an unadulterated culture and noticed that it formed a substance that was able to kill several disease killing bacteria. Further research revealed that the substance came from the penicillium genus and therefore named it penicillin later on. Consequent investigations revealed that penicillin affected bacteria such as staphylococci among other Gram-positive pathogens that cause meningitis, scarlet fever, diphtheria and pneumonia. Penicillin however, had no substantial effect on typhoid fever or paratyphoid fever caused by Gram-negative bacteria whose cure was his main source of concern then (Eric, 2004).

Despite the fact that Fleming published his discovery in the British Journal of experimental pathology, minimal considerations were accorded to his findings. Nevertheless, he continued with his investigation but was hindered by the fact that growing penicillium was relatively a hard task and isolating the bacteria was equally cumbersome. These hindrances derailed his research and in fact led him to doubt the importance of penicillin in treating infections as its action seemed to be rather slow. He even doubted the period of time penicillium would last in the human body to effectively kill the bacteria (Eric, 2004). In 1940, he eventually abandoned penicillin but almost immediately, Ernst Boris Chain and Howard Florey embarked on mass production and research on it at the Radcliffe Infirmary in Oxford. The Pearl Harbor bombing prompted the British and U.S. governments to fund the two researchers in their endeavor so as to get adequate penicillin to treat the wounded soldiers in the Allied forces (Gladys, 1985).

Edward Abraham and Ernst Boris Chain in the quest to produce mass penicillin to treat the wounded soldiers came up with a viable method of isolating and concentrating it. In fact Abraham in Oxford and with liaison with the two researchers was able to discover the correct structure of penicillin. Norman Heatley, another member of the Oxford team proposed that the active ingredient of penicillin be put in water a second time by altering its acidity. This necessitated the production of adequate drug to commence testing it on animals. Many other researchers joined hands with the Oxford team to ensure the success of this research. Finally, the enlarged team was able to come up with methods of purifying penicillin to an efficient first stable form in 1940.  This was followed by successive clinical trials which inspired them to advance the means and ways of producing and distributing penicillin in bulk in the year 1945 (Gladys, 1985). Although the success of this discovery involved many people, it was exclusively attributed to Alexander Fleming who was given the mandate of naming the drug.

Although accidental, Fleming’s discovery and isolation of penicillin in the year marked the commencement of the contemporary antibiotics. Previously, other scientists had written articles imploring that mould otherwise known as penicillium sp. had the potential to inhibit growth of bacteria and cure some bacterial infections. Although Ernest Duchesne in his thesis titled “Contribution to the study of vital competition in micro-organisms: antagonism between moulds and microbes”, in 1897, and Clodomiro Picado Twight’s work at Institute Pasteur in 1923, sought to establish the effect of penicillin sp genre in the growth of staphylococci, it was Fleming who came up with the break through on the use of penicillin to treat infections. Other than the discovery of penicillin, Fleming also deduced that when penicillin was used in small quantities or for a short period of time, bacteria developed antibiotic resistance (Gladys, 1985). Fleming used the scientific method of isolating penicillin to come up with the most vital remedy of treating infections. Although he died of heart attack and was buried in St Paul’s Cathedral, London, Fleming’s contributions in the field of antibiotic have found wide applications in the modern world (Gladys, 1985). Presently, physicians are confidently able to treat both surface and deep wounds effectively by applying Fleming’s theories and discoveries.