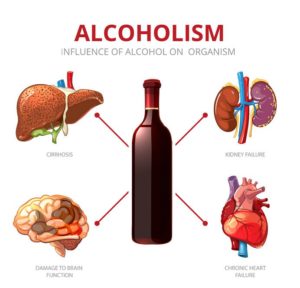 The client in the case study exhibits symptoms of alcoholism. Also called alcohol use disorder, alcoholism is a disorder that is associated with traits such as dependence on alcohol, preoccupation with alcohol drinking and repetition of alcohol drinking even after experiencing detrimental effects of alcoholism (Lehne, 2013). The client in the case study has developed the disorder since he is very dependent on alcohol and continues to use it even after experiencing negative effects of its consumption. An alcoholism diagnosis criterion is currently described in the DSM-5. As explained under the criterion, people that have developed the alcohol use disorder exhibit traits such as craving appetite for alcohol, loss of control after drinking and development of tolerance and physical dependence to alcohol (Lehne, 2013). The client in the case study exhibits the traits mentioned above. He loses control after drinking alcohol to the extent that he uses violence against his marriage partners and sometimes, he does not remember what he did after he becomes sober. When he is not drunk, he develops withdrawal symptoms, implying that he has developed physical dependence to alcohol. He has a craving appetite for alcohol.

Under the DSM-5 criteria, a person who has developed alcoholism disorder usually continues taking it despite the fact that it is causing problems in his or her life (Lehne, 2013). The client in the case study exhibits that characteristic since he has continued taking alcohol despite the fact that it led him to lose construction job. Also, the client continued taking alcohol despite the fact that it led to a break-up of his family. In fact, the disorder has led to break-up of two marriages. Due to the disorder, he is not allowed to see his son. After the break-up of the two marriages, he got a girlfriend. However, the girlfriend left him because of alcoholism and use of violence when he is drank. The problems caused by alcoholism can be in the form of harm on physical or psychological health. The disorder has an impact on his health because when he is not drunk, his right knee shakes constantly and he becomes restless. He also developed feelings of anxiety. Even after realizing about such negative effects of alcoholism, he has continued drinking.

Another trait in the DSM-5 is the failure to fulfill important obligations due to over-dependence on alcohol (Lehne, 2013). A person that has developed that disorder can use the money meant for paying bills on alcohol. The client in the case study exhibits that trait since he does not provide support to his child. He has also failed to pay for important bills, including rent. In fact, he is being evicted because of the failure to pay the rent. He is even unable to purchase medications for hypertension. Another trait described in the DSM-5 criteria is that alcohol use disorder affects ability to work optimally (Lehne, 2013). Although the client in the case study tries to work harder than the workmates, the disorder makes him very unreliable. Sometimes, the effects of alcohol makes arrive at work late. He also goes to work with hangovers because of drinking, which affect his ability to work effectively. Also, people that have developed the alcohol use disorder tend to use it in dangerous situations, as explained in the DSM-5 criteria (Lehne, 2013). The client in the case study continued driving when drunk even after being arrested. Last, alcohol use disorder is associated with tolerance. Tolerance occurs when a person takes more drinks than before in order to get satisfied. The client stated that he takes more alcohol than when he was in the army in order to get satisfied.

The client in the case study has not reached to a point where it is difficult to treat his condition. However, there is a need for thorough diagnosis of his condition in order to determine the best treatment options to use. The councilor has noted that he is unable to treat the client and that the client requires additional, more effective screening and care. Subsequently, a self-administered form for evaluating substance abuse was applied on the client. The results derived from the assessment indicated that the client needs moderate to high intervention for alcohol abuse. The client’s diagnosis results suggest that different types of effective treatments should be applied to him. First, he should be referred to a psychiatrist or psychologist who has knowledge on how to use behavioral therapy treatment approaches. One of the common behavioral therapies that are effective in treating the alcohol use disorder is the cognitive-behavioral therapy (CBT) (Dupuy, 2013). When applying CBT, the psychiatrist determines the fundamental causes of alcoholism and lets the client acknowledge them. The client is then taken through a step-by-step process after which he/she accepts to take an active role in reducing or stopping intake of alcohol. The client in this case, for instance, can be taught to overcome memories of deaths he witnessed when he was in the army and factors that lead his to continue drinking. The client can be made to understand that he has a great future if he stops the drinking habit. In case of a need, the client can be supported to get a new job. Considering his situation, the client should also be referred to a medical doctor to be treated using medications that help in detoxification of the body. The client can also be referred to rehabilitation programs, such as 12-step and Alcoholics Anonymous programs to be provided with treatment for a specific period of time (Dupuy, 2013). The behavioral therapy should continue until the client is fully healed.

One of the most important ethical standards in healthcare profession is confidentiality. According to the standard, the information about the health of a patient should be kept confidential at all times. The information should only be shared with the client and other healthcare providers that are involved in the treatment process (Dupuy, 2013). In case of a need, the information can be given only to people that are close to a patient, such as close relatives or friends.

To adhere to the standard of confidentiality, the reports about the health situation of the client in the case study should not be shared with people that are not involved in the treatment process. The report derived from the self-administered test should be shared between the client, the medical professional and the psychiatrist involved in the treatment (Dupuy, 2013). The information can be shared with other people that are not related to the client only upon his consent.

If the client is enrolled in a rehabilitation program, the reports about his health can only be shared with the health professional that will be directly involved in treating him. Even the other healthcare professionals that are not involved in the treatment should not have access to that information.