Pre-natal exposure to alcohol is one of the top three known preventable causes of birth defects, mental retardation and neurodevelopment disorders (National Organization on Fetal Alcohol Syndrome, 2011). According to Dasgupta (2011), a collection of birth defects arising from pre-natal alcohol exposure were identified in 1973, as a clinical entity named fetal alcohol syndrome. Fetal Alcohol Syndrome, also known as FAS, can be described as a collection of physical, cognitive and behavioral abnormalities that develop in a fetus in relation to high consumption levels of alcohol during pregnancy. Children born of this condition reveal varying degrees of effects ranging from mild effects and behavioral difficulties to serious cognitive impairment and multiple disabilities. Resulting manifestations of this condition vary with age and circumstances. This particular paper seeks to provide an analysis of Alcohol Fetal Syndrome in addition to describing its possible psychological effects.

According to the National Organization on Fetal Alcohol Syndrome (2011), Fetal Alcohol Syndrome is the leading known preventable cause of birth defects. This condition attributed to the prenatal exposure of alcohol to the fetus produces a range of effects, and newborns that do not comply with all the diagnosis criteria of the condition may be severely impacted negatively throughout their lives owing to their exposure to alcohol. 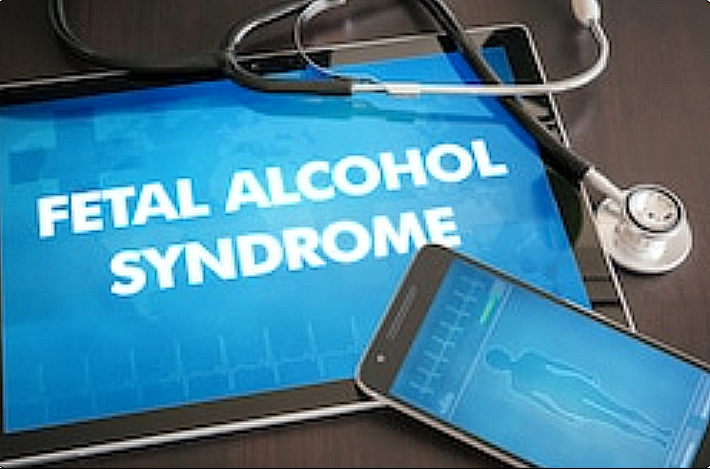 This disorder has been largely characterized by prenatal and/or post-natal growth deficiency, a characteristic set of slight facial anomalies, central nervous system dysfunction and pre-natal alcohol exposure (Baldwin, 2005). Fetal Alcohol Syndrome, therefore, include a wide range of unending birth defects attributable to high consumption levels of alcohol by pregnant mothers during pregnancy, and which also includes all severe difficulties found in newborns born with the condition. Niccols (2002) highlights that the prevalence of fetal alcohol syndrome is typically estimated 1to 3 in every 1000 live births in the general population. However, reported incidence varies depending on the study population and design. In addition, an individual having this condition can incur a lifetime health cost of more than $800, 000, with the physical and the behavioral problems associated with it can last for a lifetime. For these reasons, Fetal Alcohol Syndrome is therefore a major public health issue.

According to Johnson (2010), individual variations in human bodily processes cause varying manifestations of the effects of both the severe or long-term use of alcohol. Alcohol affects nearly all the organ systems through the natural progression process of the disorder. Abel (2004) argues that prenatal exposure of the fetus to alcohol may affect various individuals in several ways with a significant amount of variability in the levels of psychological, behavioral and cognitive deficits.

One of the most significant psychological effects of Fetal Alcohol Syndrome is mental retardation, a result of impaired brain development in the fetus (Dasgupta, 2011). This developmental disability is often described as an intellectual level functioning that is well below average, and which results in significant limitations in the affected child’s daily living skills. It is considered to be the most severe as well as the unfortunate psychological effect that alcohol has on the developing newborn.

The mentally retarded children normally reach developmental milestones such as talking much later compared to children in the general population. These children normally have difficulties with communication, social as well as functional academic skills. According to Mattson & Riley (1998), IQ tests, academic achievement tests as well as monitored school performance give evidence those children born of alcohol mothers exhibit lower intelligence levels. Mental retardation, however, varies with the severity of alcohol consumption by the pregnant mother. Although the consequences of living with an addicted, alcoholic parent vary, nearly all newborns from alcoholic parents are at great risk and live with psychological scars as a result of parental alcoholism.

Another psychological effect attributed to the Fetal Alcohol Syndrome is poor reasoning and judgment skills. Children with this condition frequently have difficulties in learning. These difficulties stem from poor thinking as well as processing skills owing to the damaged brain. As highlighted by Johnson (2010), many chemicals including alcohol are known to have undesirable effects on the fetus’ developing brain. As a result, when the fetus gets exposed to large amounts of alcohol, several of his body systems, including his/her neurological system suffers damage. This continuing, multisystematic effect of alcohol on the newborn whose mother abused alcohol is what contributes to these psychological effects.

The affected children may be able to grasp the information, but may not be able to apply them in different situations. The learning process of such children may also occur in spurts, with easy learning periods being followed by difficult ones. According to Baldwin (2005), this can be explained by the fact that the prenatal exposure of the fetus to alcohol disrupts the electrophysiology as well as the neurochemical balance of the brain; as a result, messages are not transmitted as efficiently or as accurately as they ought to be. In other affected children, the wiring of the message system of the brain becomes dysfunctional, resulting in faulty message receptors.

During the difficult periods, the affected children are also known to have problems remembering as well as putting into use their learned or acquired information. As a result of inconsistent learning, a number of teachers may assume that such children are just not trying, in so doing, labeling them as lazy or stubborn. Learning difficulties typical to early school years include hyperactivity, slow language development, poor attention span and poor motor skills (Science Daily, 2009).

Inappropriate social skills are another psychological effects attributed to the Fetal Alcohol Syndrome. According to Science Daily (2009), a new study examining a wide range of cognitive factors and social behaviours on children with Fetal Alcohol Syndrome, found out that those children suffering from this condition have significantly weaker social cognition as well as facial emotion processing abilities. Social cognition and emotional abilities are skills that significant as far as relating and communicating socially with other individuals is concerned.

Children born of this condition are therefore known to exhibit socially inappropriate behaviours attributed to their impaired practical reasoning skills. This psychological characteristic connected with Fetus Alcohol Syndrome reflects the dysfunction of the brain (Abkarian, 2002). One of the inappropriate social behaviours exhibited by such affected children is that they may be unable to think about or consider various results of their actions. Such children are also known to be socially as well as emotionally immature; as a result, having difficulties getting along with their peers.

Socially, they are known to be very outgoing as well as socially engaging. As a result of this, they are often viewed by others as intrusive, exceedingly talkative, and generally oblivious of social cues and principles. Due to the poor socialization skills as well as poor social judgment skills, such children are commonly hungry for attention, even negative ones. There is therefore a potential for both isolation as well as the exploitation of children with Fetus Alcohol Syndrome (Abkarian, 2002).

Other than these, children with Fetal Alcohol Syndrome are also known to be easily influenced by others. This is based on the fact that they have a trusting nature as well as the eagerness to please, as result; they get easily attracted to strangers. Due to this nature, they are normally vulnerable to manipulation and victimization, a factor that calls for concern amongst their caregivers.

According to ScienceDaily (2009), one finding with a potential for immediate action was that children having Fetal Alcohol Syndrome have difficulties interpreting social information, including emotion in faces. These difficulties therefore predict their behavior problems linked to their social development problems.

A psychological effect of the Fetal Alcohol Syndrome also common amongst children with this condition is a more severe behavioral problem. As highlighted by Baldwin (2005), a profile of children having Fetus Alcohol Syndrome include items such as restlessness and distractibility, in addition to behaviours often portrayed as ‘out of control’ and juvenile. According to Baldwin (2005), children with this condition have difficulties receiving sensory information, integrating, organizing and processing it and thereafter developing an appropriate response. These difficulties can be explained by the fact that some sensory channels may be under-responsive to input. These sensory processing deficits lead to poor modulation of arousal as well as alertness resulting in behavioral disorganization, emotional instability, and hyperactivity, and learning problems.

Abel (2004) highlights too that behavioral problems amongst children with this condition are also often as a result of sensory processing dysfunction. Regulatory problems are normally witnessed early in infancy owing to the inability of their nervous system to screen out external stimuli and modulate it. As a result of this, children suffering from this condition are often difficult to care for, and may often cry inconsolably and have difficulties during feeding.

Overall, children and adolescents suffering from this syndrome are more likely to take part in antisocial as well as sociopathic behaviours, such as stealing, cheating and lying. According to Streissguth et.al (2011), Fetal alcohol syndrome is not just an infancy disorder as there is a predictable long-term progression of the disorder into adulthood, in which maladaptive behaviours present the greatest challenge to management.

Children born of alcohol dependant parents may also present a significant degree of deficiencies as well as abnormalities associated to the central nervous system. These take several forms; some can be noticed within days after birth while others may only be detected after several years. Exaggerated tremulousness is one of the most common of these deficiencies and is known to occur much more frequently and vigorously among the affected children for longer periods than in healthy adults. Children with Fetus Alcohol Syndrome also experience frequent jitteriness and bad temper (irritability), a behavior that demonstrates that their nervous system is not functioning well. Additionally, such children also experience disorganized sleep patterns often revealed by the fact that they more restless nature during sleep when compared to other normal infants (Baldwin, 2005).

Overall, a study conducted by Streissguth et al (2004) provides an exclusive outcome of varied implication of the Fetus Alcohol Syndrome. The study conducted by Streissguth et al (2004) entailed the investigation of a sample group of 415 patients with FAS between the median ages of 14 years. A clinical description of the sample group was undertaken through a Life History Interview in order to identify the major problems that face patients with Fetal Alcoholic Syndrome.80% of the patients studied were not brought up by their biological mothers.

The findings of this study revealed that the lifespan prevalence for adolescents and adults was 61% for interrupted school experiences, 60% for trouble with the law, 50% for imprisonment (in jail, prison or a psychiatric/alcohol/drug inpatient setting), 49% for inappropriate sexual behaviours on repetitive occasions, and 35% for alcohol/drug problems. The probability of evading these undesirable life outcomes are increased 2- to 4-fold by receiving the diagnosis of Fetus Alcoholic Syndrome at an earlier age and by being raised in good stable environments (Streissguth et. al, 2004). Fetal alcohol syndrome has therefore specific recognizable patterns of malformation.

From the above analysis, it can be argued without a doubt that fetal alcohol disorder is a condition of great concern, as result, a major public health issue. Alcohol consumption during pregnancy has significant adverse effects on the fetus and the baby. Dependence and addiction to alcohol by the mother has a severe effect on the fetus as it makes it become addicted. At birth, the newborn’s dependence on alcohol continues and since it is no longer available, the newborn’s nervous system gets over stimulated, leading to withdrawal symptoms. Other than the severe effects of withdrawal, newborns often experience teratogenic effects of alcohol. A number of deformities usually on the face and head, heart defects, and mental retardation are witnessed with this condition. The syndrome is however preventable and early intervention can play a significant element in determining the prognosis for a child having Fetus Alcohol Syndrome.

Evaluation of a School Technology Plan for Staff Development