Since time immemorial, crimes have been committed in the world societies. In the recent past, crime rate has increased significantly. Different theories have been put in place to explain these crimes. The functionalist theory is one of the strain theories that attempts to deeply explain crime and deviance as they occur in the societies. Albert Cohen’s theory of delinquent subcultures focuses on mainstream cultural objectives and goals in the vast range of societies. In addition, the theory centralizes on the reasons why the lower class people in the world societies have failed to attain theory desired goals and objective thus replacing them with deviant behavior which often give rise to criminal activities. According to Cohen, the criminal acts that individuals often engage after failing to achieve their objectives leads to development of delinquent subcultures whose objectives and goals sharply contrast with those associated with achieving success in the society. 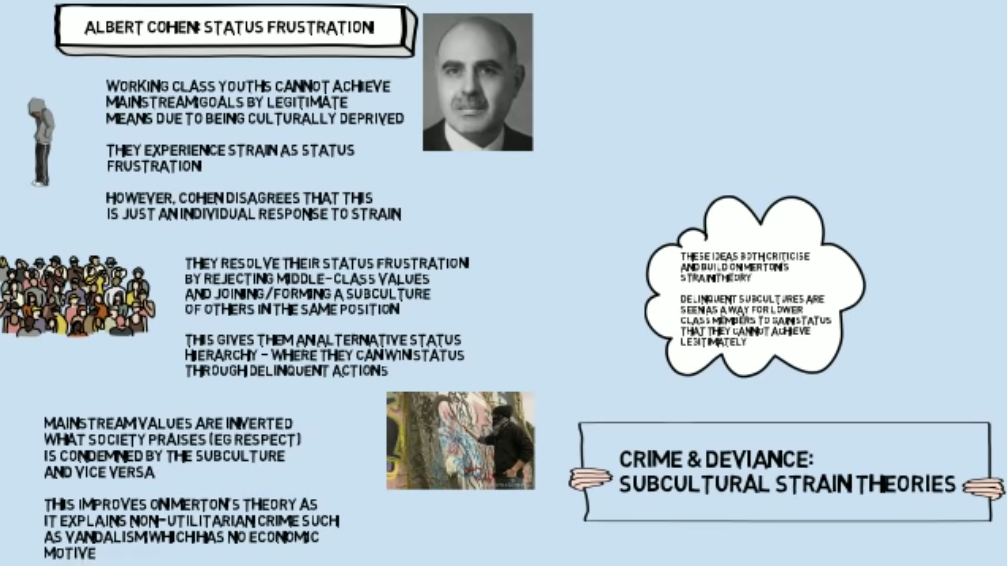 Delinquent behavior among the young people in the societies is uprising against what people in the upper class and the middle class believe should be.  The poor conditions experienced by the poor class in the societies, the youths encounter another form of culture that sociologist has labeled status frustration. So what actually happens is that, because these individuals do not fit the existing culture and norm, they ended up forming gangs in an attempt to support each other. The formed gangs are very rebellious and engage in opposing the rules, processes, systems, goals and objectives of the society. These individuals take norms from the larger society or culture, but turn them upside down. Therefore, the delinquent conducts among the young people in the society is right by the standards and rules of the subculture precisely since it is against the norms of the larger society and culture.

The lower class people have been sidelined in the society. They do not acquire necessary communication skills, which in the modern societies is a very crucial skill. Cohen theory explains that delinquent subcultures do no occur as result individual deviant behavior only but by societal factors that pressurize these individuals into forming them.

One flaw that children face in the lower class society is that they are not capable of producing a positive image in the eyes of the responsible authorities. They cannot conform to what Cohen calls “authority figures middle-class measuring tools.”  Unlike positive evaluations of individuals, negative evaluations follow individuals for the rest of their lives unless a corrective action is taken to change it. Fundamentally, the lower-class boys in the society suffer rejection by the upper and the middle-class decision makers. On condition of such situations, these boys will opt to being corner boys, the college boys or the delinquent boys. In this respect, the corner boys refer to those portrayed as those not accepted by the middle class counterparts. The corner boys would not engage in delinquent acts but will commit minute offenses. Those praised by their peers often gain sense of comfort and boost individual’s self-esteem. Since they cannot compete with those in the middle and the upper class, these boys will resort to staying in the neighborhood where they compete their lives there. They will compete for their lives in the neighborhood within the lower class by engaging in minute offenses which can often give rise to serious criminal acts especially in the later stages of their lives. The college boys are the next group of lower-class boys. They praise everything that occurs in the middle class societies and they have the tendency of going down the road to fight for their lives. Their actions often lead to dead-end and this is normally caused by the fact that these individuals do not posses have the necessary skills to pursue their lives in the middle and the upper class. The delinquent boys represent the most rebellious groups that flip the values and the norms observed by the middle and the upper class people. In order to achieve their goals and means, they engage in short run hedonism, where they assume that “living for today and letting tomorrow take care of itself.” They are very careless hence do not consider what will happen in the future. They do not weight the consequences of their actions. They do not take heed of the societal teachings; do not observe the behaviors of the authorities hence their behaviors are difficult to control. The only thing they do is to form gangs in an attempt to persuade others that they can make by their own. Boys who are incapable of achieving success in the society often resort to a process that Cohen termed it as reaction formation. This implies that the affected victims react with extremely violent responses to various situations as they occur in the society. These victims do not realize that they on the wrong when break the laws.

Arguably, the focal concerns of the lower class people include trouble, excitement, fate, smartness, toughness and autonomy. People get into trouble by breaking the common laws, and this has the effect of creating image on the subject. In cases where the subject fights and win, people in the class will respect and honor i.e. reputation increases. Therefore, people would not try to fight that individual. As revealed by the Cohen theory, excitement has contributed to range criminal activities in the society. Excitement makes individuals want to know an activity that is out of the societal norm. Autonomy makes individuals desire to become independent. Since they do no have adequate opportunities of achieving this, they resorted to gang involvement.

The lower class people do not feel the impact of policy implementations made by the government or local authorities. This is because they are sidelined during the decision making.  The young children do not engage in educational programs that could modify their behaviors and they cannot get the special needs. Due to idleness and the attempt to meet their needs, the subject resort to criminal activities.

Strain theories have tried to explain the occurrence of crimes in the world societies. Objectively, Cohen theory offers the best answer as to why there are cases of crimes in the society. The environment within which an individual is reared helps shape behavior.