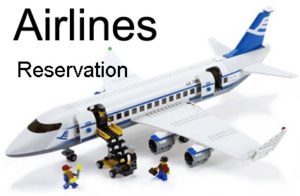 Reservation systems are a set of applications that support the direct contact between an airline and their passengers. The reservation systems of Jet Blue and West Jet were used for reservation and interfacing with various systems belonging to other partner airlines as well supported travel agencies and a number of distribution channels in making reservations for their airlines.

The reservation systems contain airline schedules, fare rates and tariffs as well as passenger and ticket reservation. The reservation system allows customers who use Jet Blue and WestJet to make reservations via the use of internet and mobile phone applications. The reservation system run by the two airlines ensured effective customer service and in turn marketed them and they grew to become large airlines with fleets of airlines in the region of hundreds and over 300 flights in a single day. By relying on their efficient reservation systems, the two airlines were able to notice and see the importance of system upgrade as the systems for more processing power as the systems they relied upon were from the initial stages when the airlines were relatively smaller and served fewer customers. The initial systems also had limitations in linking prices and seat inventories to different airlines that worked with both Jet Blue and WestJet. Upgrading the system would allow them incorporate the feature of linking ability with the other airlines that cooperated with either airline.

Before flipping from one system to another, rigorous planning is entailed and this is in attempt to avoid any shortcomings that may arise during the changing as well as come up with alternatives and solutions to some of the problems entailed that cannot be avoided. WestJet’s website crashed down severally as it was jammed by customers who wanted answers over the below par services they were being accorded during the system switch. Even though the upgrading and moving to Sabre servers had been planned for several months, WestJet had not anticipated the secondary shortcomings that would arise such as the jamming and crashing of their website.

JetBlue had a smoother transition but owing to lessons learnt from the shortcomings during the WestJet’s transition. The risk factors both airlines entailed in upgrading their reservation systems did not only end at the customer dissatisfaction but moved to the risk of information and data loss. Furthermore, the airlines were transferring their systems to a larger IT specialist system that served several airlines. In turn, competition risk factors definitely arise as competitors can readily borrow a leaf from your successful plans and improve on them to bit you in the market.

The large amount of files that WestJet had to transfer to the Sabre servers proved a challenge to the airline. First, the airline did not anticipate the time it would take for the entire transfer as well it did not bring down the passenger loads such as bookings so as to make the transfer easier and more efficient. Out of this poor planning, secondary risks followed such as the large number of provoked customers who took to the airline website in magnitudes to air their grievances as well as jamming the airlines call centers.

Similarly JetBlue had a number of pitfalls such as prolonged call waiting and failure of airport kiosks and ticket printers to come online as supposed. Both these challenges faced by WestJet and BlueJet had managerial faults as the management did not widely consult and get down to draft proper alternatives since all these pitfalls were avoidable. Apart from the lack of proper timing as an organizational risk, the airlines as well faced technical hitches as seen with BlueJet, for instance, the failure of the airport kiosks from reading could have been a technicality where the data about the kiosk may have been corrupted or ignored during file transfer to Sabre servers. The IT technologies of the airlines as well did not proof strong enough to handle hitches and large influxes; this resulted to, for instance, the crashing of WestJet’s website.

Reservations is what coordinates a good customer relation with the airlines, therefore the airlines should have looked deeper at the expense altering the reservation systems would have on their patrons. First and foremost, the airlines ought to have brought to the attention of their customers their intentions to upgrade the systems early enough and not wait until the material day to inform the customers; a mistake that WestJet did. Informing customers early enough would have served the airline the trouble of making reservation even when they were about to transfer their files, this led to the customers being letdown as they had to wait longer alongside experiencing booking difficulties and several of services crushed and inaccessible thus hurting the customer relation.

Additionally to tackle the risks that were faced in the projects by the airlines, having in house skills and know how would have been beneficial. With this, the airlines would have been in a position to foresee some of the challenges like the need to hire more supporting stuff as well they would not need to put their agents through rigorous complex steps to process the data that was to be transferred to Sabre.