Air traffic management (ATM) encompasses all systems that assist aircrafts in taking off from airspace transit, and landing, including all aspects of aeronautical meteorology, controlling of air traffic, as well as air navigation systems. ATM continuously faces challenges in managing the increasing client demands for air transportation. Particularly, providers of air navigation services have the mandate of improving pertinent air control issues, enhancing safety of both workers and clients, as well as ensuring efficiency at reduced environmental costs. Air pollution has been associated with diverse health concerns as well as climate conservation challenges, making it an area of great importance in the management of air quality. It is therefore imperative that all relevant stakeholders including air transport leaders, manufacturers, as well as governments and governing bodies come up with mechanisms, including legislations, to ensure that air service providers focus on utilizing positive management practices for environmental conservation. Various pollutants, caused by aviation practices, affect the quality of air around airports posing a real health problem.

Overview of the Problem

Many aircrafts are designed to combust their fuel efficiently with very low emissions of smoke or non-combusted discharges. Most manufacturers fit aircraft engines with turboprop and turbofan to increase efficiency in fuel combustion (Thales, 2014). Despite all these improvements, the increase in air travel demand has overstretched the air transport industry with increased travel, making the realization of pollutant free airport environments a great challenge. Moreover, aircraft movements while on the ground, during landing and taking off, produce significant pollutant emissions, which affect the quality of air around airports (Thales, 2014).  Road traffic, other machinery, such as forklifts, cranes, and other mechanical operations around the airport culminate into emission of high concentrations of harmful particulate matter and gases. This poses a health risk to communities living around the airport, including personnel and travellers. Moreover, this creates a significant threat to the surrounding natural environment and negatively affects the quality of air. 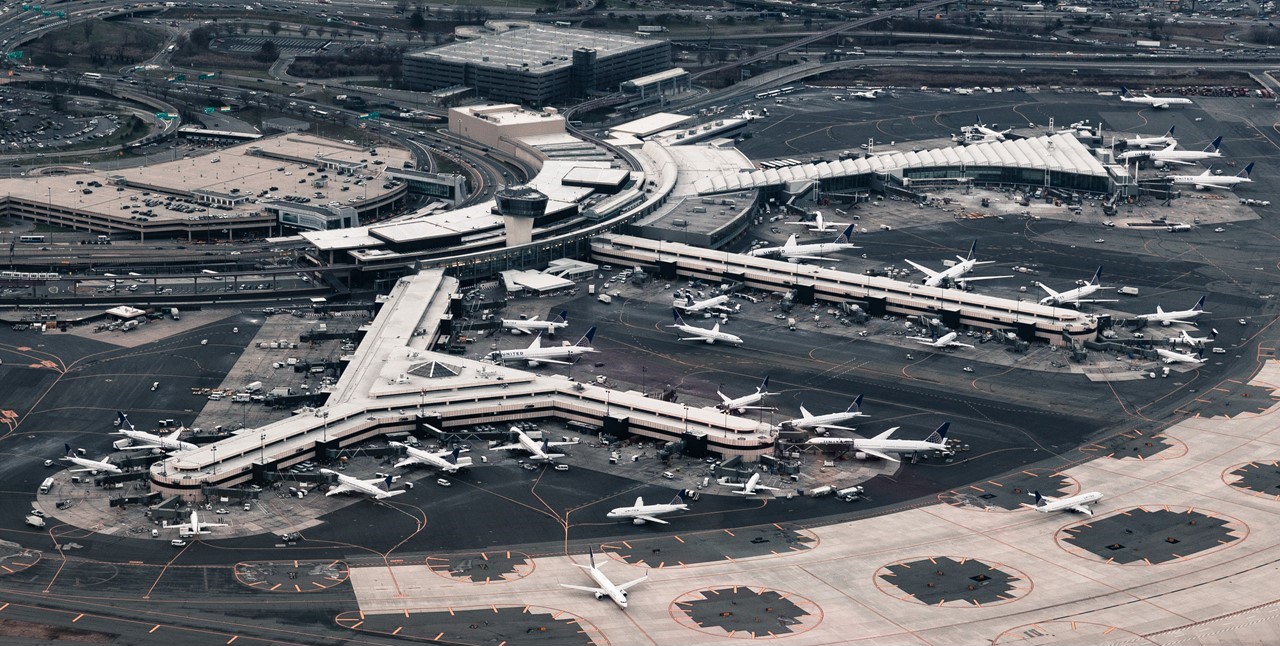 Some emissions, for example from combustion of jet fuel have been associated with negative health impacts, such as nasal, throat, larynx, lung, and brain cancers (Mark J. & Mark W., 2000). Besides, emissions from aircrafts have a close association with the development of diverse infections that contribute to asthma, leukemia, lymphoma, and birth defects. This culminated into the European Commission proposing to bring air transport activities into EU Emissions trading Scheme in a bid to combat diverse climatic changes resulting from aircraft emissions (Keane, 2012). According to the commission, greenhouse emissions from the aviation industry increased by nearly eighty seven percent in the European Union alone, in the period between  1990 and 2006 (Keane, 2012). In fact, the commission proposed the taxation of air travel associated with emissions to ensure that total external aviation costs are taken into consideration.

Pollutants in the Environment Caused by Aviation

Of greatest concern is the emission of nitrogen dioxide around airport environments. Sources indicate this gas is the main environmental pollutant emission threat that has changed the global climate on an alarming scale (Owen et al., 2010).  Usually, the emission of nitrogen dioxide follows increased ground activity by aircrafts, surface traffic, as well as other machinery operations within the airport. These produce nitrogen oxide, the precursor of nitrogen dioxide.  In the lower atmosphere environment, nitrogen oxide contributes to ozone production. In the lower atmosphere, ozone is an important pollutant that greatly contributes to diverse unfavorable climates and global warming concerns. High altitude supersonic aircrafts produce nitrogen oxides that have been linked to the damage of the protective stratospheric ozone layer, which helps in the filtration of harmful solar radiations (Environmental Protection UK, 2012; Rojo, 2007).

Jet emissions contain particulate matter that affects the environment. According to studies, combustion of jet fuels culminates into the release of benzpyrene as a byproduct of incomplete combustion that normally comes out with soot (Rojo, 2007). This chemical is highly carcinogenic and has been shown to be a causative agent of many cancers as well as tumors in human beings culminating from skin and lung adsorptions. Besides, combustion of jet fuel has been associated with the production of high amounts of sulphur dioxide, a harmful gas that can cause severe irritation of the eyes and airway tracts. Literature indicates that jet fuel contains high concentrations of sulphur, nearly 1000ppm as compared to 10ppm in diesel (Mark J. & Mark W., 2000). During combustion, this is converted into the harmful sulphur dioxide, which is transmitted into the atmosphere thereby compromising quality of air.

Other harmful emissions include volatile organic compounds (VOCs) and carbon dioxide. VOCs can include, for example benzene, which is carcinogenic, and some forms of aldehydes that can cause forms of skin, eyes, and air tract irritation (Mark J. & Mark W., 2000). Volatile organic substances usually originate from vaporized fuel or incompletely combusted material that exits as exhaust gas. In some instances, the volatile compounds attach to particulate materials and escape into the air, culminating into compromised air quality around the airport. Carbon dioxide emanates from the combustion of organic fuels. It is a major contributor to climatic deterioration and global warming.

Sources indicate that this chemical is produced in large quantities from aircraft activities in the United States and other highly developed airports that have a lot of jet activity (Rojo, 2007). The resulting emissions find their way into the environment, adversely affecting the quality of air. This readily predisposes the populations living around airports, air travel personnel, and travellers, to dangerous environmental and health concerns. According to the Danish Ecocouncil (2012), jet emissions usually affect a radius of twenty-five miles around the airport area. This implies that communities, animals, and crop plants are dusted with toxic jet emissions within a distance of twenty-five miles away from the airport every day. Typically, airports spew toxic pollutants in hundreds of tons annually all over the world. Flow of air currents ensures that the toxic pollutants also reach water bodies where they negatively affect marine life.

The International Civil Aviation Organization (ICAO) is mandated with the setting up of international standards that govern the emission of certain pollutant gases and smoke for new aircraft engines. That notwithstanding, only minimal improvements have occurred in the aviation industry in the reduction of harmful gases and emissions, as compared to other sectors that also use fuel (ICAO, 2014). Consequently, there is a need for more proactive approaches to mitigate the problem. For example, the adoption of better engine types that encompasses selective catalyst reduction mechanisms and the recirculation of exhaust gas to ensure maximum combustion. Most gaseous and vapor emissions have been associated with incomplete combustion of fuels (Environmental Protection UK, 2012).

Therefore, increasing the number of recirculation cycles will ensure complete combustion and a reduced amount of harmful emissions.

It is also important to develop proactive policies that are consistent with specific concerns associated with air quality and environmental conservation similar to related approaches in other industries, such as automobile. Currently, policies governing aircraft activities and environmental concerns are less stringent than those that govern other sectors of the economy involved with fuel combustion, such as factories and the automobile industry (Kularatna & Sudantha, 2008). This could be partly because most pollution by aircrafts takes place in the higher atmosphere compared to automobiles and other engine activities on the earth’s surface. Integrating related aviation policies with those of the transport industry will achieve a common approach to environmental conservation.

Stakeholders, governments, and aircraft manufacturers should also review, develop, and adopt better aircraft technologies on a continuous basis to reduce the extent of air pollution and environmental concerns. In addition, plans should be in place to cater for expansion activities to reduce the overstretching of existing limited resources with increase in air travel demand.

Various pollutants caused by aviation practices affect the quality of air around airports posing a real health problem. Aircraft movements while on the ground, during landing and taking off, produce significant pollutant emissions, which affect the quality of air around airports. Besides, road traffic, other machinery, such as forklifts, cranes, and others, are also significant sources of air pollutants around the airport, posing a health risk to surrounding communities, air travel personnel, and travellers. Nitrogen dioxide, benzpyrene, sulphur dioxide, carbon dioxide, and volatile organic compounds are examples of harmful environmental pollutants caused by aviation. It is important to establish positive mitigation policies by all stakeholders, governments, and aircraft manufacturers to come up with proactive approaches aimed at air pollution reduction around airports.