The atmosphere consists of natural gases that are there to support life on earth, life of human beings and other organisms. The stratosphere pollution has been found to be a threat to human life as well as other organisms on the earth surface. Air pollution can be defined as introduction of particulates, biological chemicals or other harmful gases into the atmosphere exposing the earth’s population to health risk. (Lancaster, 2015) Pollution cause diseases, damage to other organisms, can cause death to human beings after a disease has progressed to the chronic stage. In addition, air pollution can also cause death to animals, damage to plants such as crops and the entire environment. 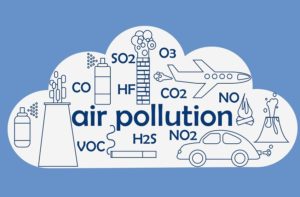 Air pollution is currently a global concern, world environmental agencies such as UNEP has put several measures in ensuring this menace is reduced, air pollution is most common in industrialized countries such as China. Most of the air pollutants are a threat to health, inhaling them can lead to long-term health problems such as lung diseases and short term such as irritation, coughs, headache, chest pain and malaise. (In Nadadur, 2015) Air pollution should not be understood to be entirely taking place in the outside, it can also occur in the buildings which can result into health complications.

Natural air pollution, has been associated with type 2 diabetes mellitus, type 2 diabetes mellitus is an illness associated with a series of dysfunctions characterized by hyperglycemia or high blood sugar level resulting from resistance to insulin, insufficient production of insulin by the body and imbalance in the secretion of glucagon. (Hassan, 2015) Natural air pollution is a predisposing factor to type 2 diabetes mellitus, it can cause increased insulin resistance and therefore occurrence of type 2 diabetes mellitus. Research shows that air pollution is associated with increased risk of type 2 diabetes mellitus, insulin is important in that when the blood sugars arise beyond normal, insulin will be produced to inhibit production of glucose and facilitate conversion of glucose to other substances for elimination in the body. High level of glucagon in the body can also cause hyperglycemia, Research in the US shows that there are about 27 million people having type 2 diabetes and another 86 million people having prediabetes. Prediabetes is where the blood sugars are beyond normal but not adequately enough to be diabetes still. Diabetes can be caused by a number of factors such as genes, extra body weight such as obese can result in glucose resistance resulting to diabetes, too much glucose from the liver; it’s normal that after a meal, the blood sugar will rise therefore the liver functions by storing some of the glucose for future use. In some people this is not the case, their liver doesn’t store the glucose and instead continue producing more sugars and this can result to diabetes. Type 2 diabetes mellitus can also result from; some cells not coordinating their functions properly and broken beta cells.

Air is mostly polluted by gases which includes; carbon monoxide, nitrogen dioxide, Sulphur dioxide, ozone, and two measures of particulate matter. Air pollution is a great problem that causes several health risks and even results to death, air pollution is predominantly common because it is created by mankind and I believe the same man can fix this problem of air pollution. Some believe air pollution is fixable some believe it’s not fixable, but personally I believe it can be fixed because it was not created out of the earth but in this earth so several measures can be put in place to fix this menace, the following ways can be used to control air pollution; process control can be applied to control air pollution, and to begin with; permits should be specific on the type and quantity of fuels that should be used, they should recommend fuels with no Sulphur pollutants in them to limit Sulphur dioxide emissions in the environment, secondly, engineers should come up and set combustion specifications to reduce pollutant gases emissions. Combustion in the furnace often produces a lot of nitrogen oxide, and to curb this form of air pollution, engineers can change or modify the combustion conditions within the furnace.  For example nitrogen oxide should not be in the chamber for a long time and lowering or raising the flame temperatures, but specifying on the one that will work best on reducing nitrogen dioxide emitted from the furnace. (Veras, 2015) Ash emissions in the air can also be reduced by using high temperature incinerator, using shorter chimneys releases pollutants lower in the environment, so tall chimneys should be used to ensure the pollutants are released high up the atmosphere. Prevention of air pollution starts with you and me, every person’s responsibility and behavior is very important as far as air pollution is concerned. How can we be responsible to prevent pollution?  Instead of using your own car to work, we can all use public buses and this will reduce the level of vehicle fumes emitted in the air.

According to a research that was conducted in 2010, it was found that air pollution is a risk factor towards contracting lung cancer, lung cancer is a group of diseases that invade the cancer cells and other distant organs and can result to death if the of the patient if the tumor progresses beyond the stage that it can be successfully removed. International Agency for Research on cancer (IARC) classified air pollution as a risk factor of lung cancer, the carcinogen air pollutants classified by the IARC to be risk factors are; fumes emitted by the diesel engines,  solvents, metals and dusts. (Hassan, 2015)  Particulate matter is the mixture of small solid particles and liquid droplets found in the air, particulate matter has been classified by the IARC as an outdoor form of air pollution that is carcinogenic. Particulate matter can also include things like smoke, dusts and chemicals, the IARC research showed an increased risk of lung cancer development from these forms of air pollution. So inhaling polluted air can lead to lung cancer, well cancer is currently the leading cause of death in the developed countries and nobody will like to associate him / herself with cancer. It’s a world problem which is in existence and we have to deal with it, we should not burry our heads in the sand and assume things are ok yet lung cancer is there. But I believe something can be done to reduce the risk factor of air pollution, increased air pollution means there will be increased cases of lung cancer. Most countries are still developing and they continue to establish industries and factories and all these contribute to air pollution, from the IARC research, we’ve seen that lung cancer can rise from particulate matter, solvents and fumes from diesel fuels. The levels of particulate matter emissions can be controlled through reducing the amounts of chemical substances used by industries and end up in the air, industries should also put measures to ensure the smoke produced is minimized or rather they use long chimneys that will see the smokes are emitted up in the atmosphere where they can’t be inhaled by people. Scientific research and specific policies should be enacted to lower the levels of air pollution, currently; scientists are still making progress to understand the effects of air pollution on lung cancer and other environmental carcinogens. They unleashed new findings recently that some chemical pollutants can cause lung cancer when an individual is exposed beyond normal, that development of lung cancer from pollution may increase as one approach the old age. IARC evaluated 970 artificial and natural pollutants agents, and out of this, IARC found that 464 can cause lung cancer; therefore air pollution can lead to lung cancer.

In conclusion, air pollution has many effects to our environment, but the major effects we have seen are mostly health related. The entire globe should come together and join hands to reduce the level of air pollution, it might sound as an impossibility but believe me you it can be done it just requires dedication. Some contributors of air pollution such as smoking are rarely being talked about by most of the air pollution experts, although the fumes emitted from cigarette smoking are of small amounts but still that small amounts when emitted for some long duration it will form a cloud of smoke that contaminates the air. (Usman, 2015) Everybody should take responsibility and fight for the atmosphere around them; you should make sure that the air you breathe around you is pure. Breathing contaminated air from pollution poses health risk to the person, but inhaling quality and pure air means good health.