Electrophoresis refers to a method used to separate and purify macromolecules, mostly nucleic acids and proteins, which differ in conformation, size, or charge. It is among the widely used techniques in molecular biology and biochemistry. Gel electrophoresis refers to the method of analysis and separation of macromolecules (proteins, RNA, and DNA) and their respective fragments, depending on their charge and size. Gel electrophoresis is applied in clinical chemistry to separate proteins by size and/or charge and in molecular biology and biochemistry to separate RNA and DNA fragments by length, separating proteins by charge, or estimating the size of RNA and DNA fragments. To separate nucleic acid molecules, an electric field is applied to move molecules with negative charges through an agarose matrix. The short molecules move fast hence migrating farther compared to the longer ones. This is due to the molecule’s ability to easily migrate via the pores of the gel. A charge separates proteins in agarose due to the pores of the gel being too large to sieve them (proteins). Gel electrophoresis is also used in the separation of nanoparticles (Colorado State University, 1).

Agarose is a polysaccharide which is extracted from seaweed. Typically it is used at 0.5% to 2% concentrations. A high agarose concentration makes the gel stiffer, and vice versa. Agarose gels are easy to prepare and non toxic. Agarose powder is simply mixed with a buffer solution then melted by heating, and then the gel is poured. Agarose gels have a low resolving power, but relatively a large separation range. DNA fragments from around 200 to 50,000 base pair can be separated by varying agarose concentration using electrophoretic techniques. Agarose gels are easily handled and cast than other matrices since the gel setting is not a chemical but a physical change with an easy recovery of samples (Colorado State University, 1). 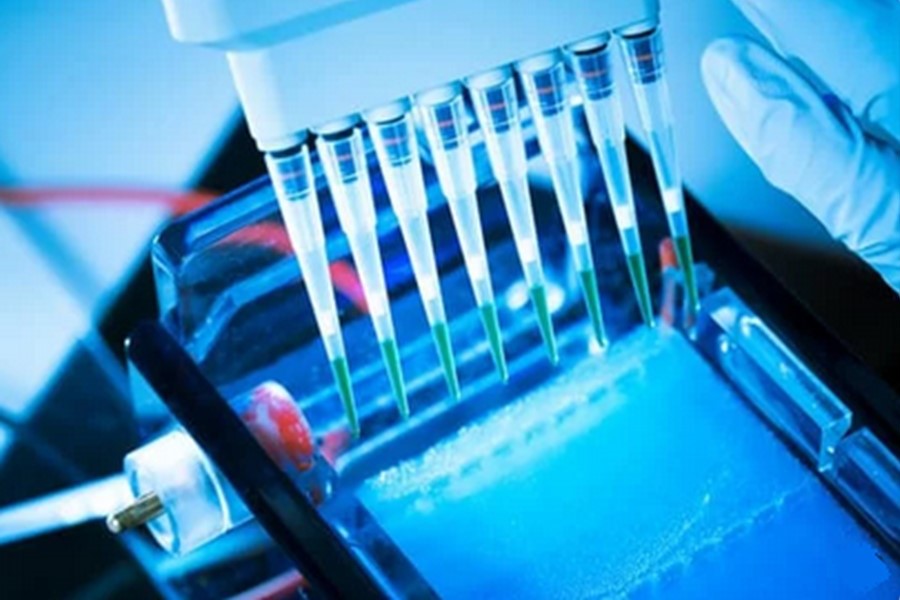 Agarose gel electrophoresis is used in the separation of DNA fragments which range from 50 base pair up to several megabases by use of specialized apparatus. The agarose percentage in the gel determined the distance between DNA bands of a certain length. Majority of the agarose gels comprise of between 0.7% (a good resolution for large DNA fragments of 5–10kb) to 2% (a good resolution for 0.2–1kb DNA fragments) of agarose which is dissolved in a buffer of electrophoresis. Low percentage gels are extremely weak and can break when lifted. High percentage gels are mostly brittle and unevenly set. Agarose gels lack uniformity in pore size. However, they are optimum for electrophoresis of proteins which are larger than 200 kDa (National Center for Biotechnology Information, 1).

Agarose gel electrophoresis is so far the most effective method of separating varying sizes of DNA fragments with a range of 100 bp and 25 kb. Agarose is separated from the seaweed Gracilaria and genera Gelidium and contains repeated agarobiose (D- and L-galactose) units. Agarose polymers non-covalently associate during gelation to form a bundles network. The size of the pores determines the molecular sieving properties of a gel. To separate DNA, it is placed into pre-cast wells inside the gel and then a current is applied. The DNA molecules phosphate backbone is negatively charged, so when it is placed within an electric field, the DNA fragments migrate to the anode which is positively charged. Since DNAs mass/charge ratio is uniform, its molecules within an agarose gel are separated by size in a certain pattern such that the traveled distance is inversely proportional to its molecular weight log. The migration rate of a DNA molecule within a gel is determined by: DNA molecule size; concentration of agarose; DNA conformation; applied voltage; ethidium bromide presence; electrophoresis buffer; and agarose type. After the separation, DNA molecules are stained with an appropriate dye and therefore visible under ultra-violet light (U.S National Library of Medicine, 1).

The adoption of agarose gel electrophoresis has revolutionized DNA separation. Before to the adoption, DNA used to be separated by the use of sucrose density gradient centrifugation. This only gave approximations by size. By adopting agarose gel electrophoresis, scientists are able to understand the mechanisms behind the separation of DNA fragments within a gel matrix. The DNA molecule conformation helps them to determine the mobility via a gel matrix. With the identification of an appropriate concentration for the agarose solution; preparation of an the agarose gel for electrophoresis; setting up the power supply and apparatus; selecting the appropriate voltage to separate DNA fragments; and using ethidium bromide to allow for DNA bands visualization, scientists are able to determine the different sizes of the separated DNA fragments.