The issue of whether people should carry guns is a matter of great debate in the US and other developed countries. The issue of gun ownership is sensitive subject because it is seen as a factor that has a great impact on the national security of the citizens. American citizens feel safer when people are not allowed to carry guns. They therefore believe that other citizens should not be allowed to bear guns in campuses, market places, bars hospitals or restaurant. The prerequisite to regulate carrying of guns and the right to own them are not often mutually exclusive.

Today guns have perceived to be used in gang activity, for celebration, murder and hunting. “People are left wondering why a gun is necessary while you are drinking your morning coffee, in elementary school classrooms, in bars, or in the locker room of your local sports arena”(Schoolinmamma 1). Although it is perceived this way the US Gun Owners association argue that the usage of guns is and should be more for self-defence and not for other violent acts. While guns are seen as good weapons for self-defence not all individuals can handle guns. This is greatly determined by the particular individual’s responsibility in carrying and usage of the gun. Although the society has formulated and passed laws restricting the use of guns to its citizens, most citizens do not want to people to own guns. 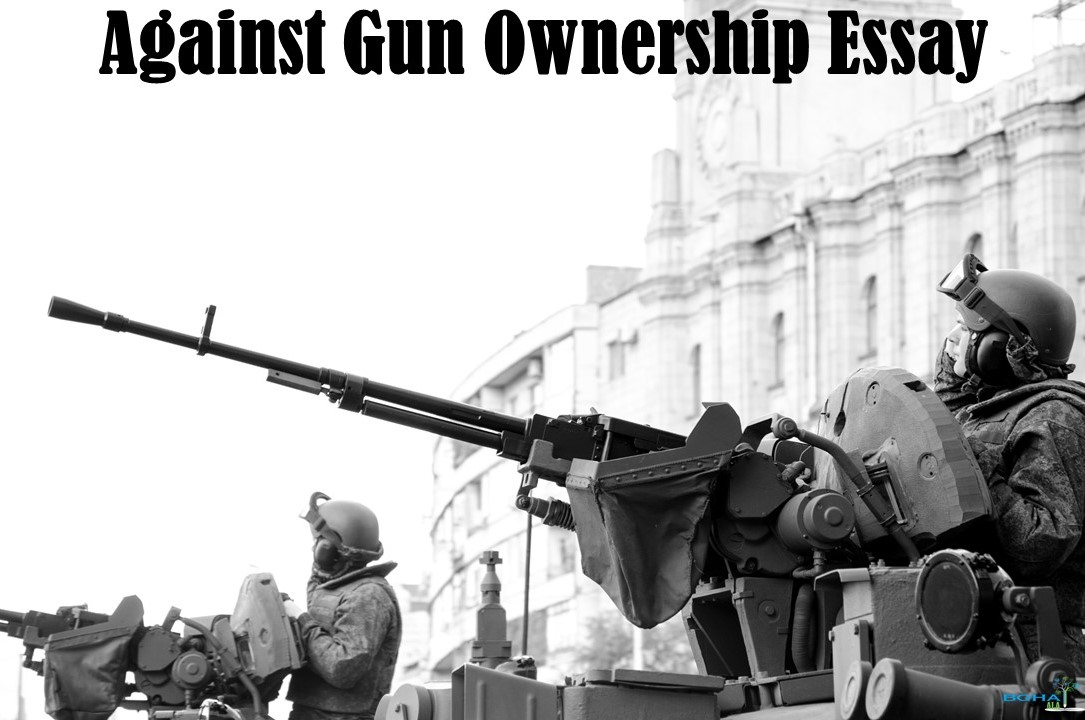 The ownership of concealed weapons by household individual provides for safety for many citizens but at the same time increases chances of incidences of suicides and homicides. Strawberry clearly explains, “Certain individuals cannot handle a firearm safely, and some individuals choose to use firearms inappropriately. (Strawberry, “Gun control” 1) Although most people have been trained on the use of guns some irresponsible people may careless shoot other family members and cause injury and even death. Improper storage of these weapons of mass destruction, may lead to accidental injury by small children who have no knowledge of their use. Some people may own guns but have little knowledge of on their use therefore can cause most accidents. This explains why the US has the greatest number of gun-related homicides cases. Incidents of accidental shooting are on the rise due the careless use of firearms. Unintended shooting have increased due to many people being allowed to own guns. This may be facilitated by responsible adults by being afraid of some issues, intoxicated by drugs or by simply anger.

Specifically, many people who misuse guns have been found to do so under the influence of alcohol and other drugs. Since many people take alcohol, it is possible that the level of gun abuse would increase if everyone is allowed to own guns or if the laws relating to gun ownership are relaxed.

While many people look at the second amendment as the law that allowed gun ownership, they fail to understand the context under which it was enacted. At the time, the country had security issues after the civil wars that led to independence. There were many armed rebels who were not under any formal command. However today, many police officers are employed and security has been beefed. The threat posed to the citizens without guns is not as much as it was in 19th and 20th centuries.

Having much gun ownership freedom may lead to more problems, more so in schools.  If the law is not tightened, many youth, such as college students will be armed and carry the guns to schools. This is because at 18, they will be of majority age and will be deemed adults. However, because of their erratic behaviours, emotional instability and carelessness, they pose greater security risk than safety to their colleagues and the general public. Because of gun ownership, students have suffered in their hands of their colleagues. Some have been raped, bullied and intimidated by their colleagues. With more liberalized gun ownership, such cases will be on the increase.

Sometimes the guns owned by people and can fall into wrong hands and cause accidents. Children can easily access these weapons easily especially when they are kept carelessly and a loaded weapon may cause a lot of destruction not only to them but also others when they fire. Mentally ill people may also access these weapons and cause some shooting which can either injure or kill people.

The use of guns by the society has made it possible for all type of people to own guns. From college students, farmers, teachers all people own different types of concealed weapons (guns). Due to the rise societal issues like cases of divorce, separations and other relationship issues the cases of suicides have been on the rise. Gun ownership has facilitated these suicidal cases. People who own these guns take advantage by easily taking their own lives using their own guns.

People in every place are prone to misunderstandings. In everyday life people tend to make mistakes to each other in every aspect of life be it a teacher to a student and vice versa, a student to a parent, a worker to his boss we all make mistakes. Misunderstandings could cause some people to be angry to others and develop hatred towards them. These people may be led to use violent to satisfy their rage. Some may resolve to even use gun to injure or kill others because of this. Whereas these people were lacking guns chances of committing such crimes could not have been there.

US government should restrict or completely prohibit the possession of guns by its private citizen because of many reasons. When these foreign or private citizens carry these guns especially in public places like markets and restaurants they intimidate the public. This makes the public be suspicious of these people and connecting them to an impending crime. They therefore go further and call the police and this may cause a waste of human resource especially the law enforcement. The act of these citizens carrying these guns also risks their lives from the rest of the public as it may be seen as an act of threat to the public. The public may be violent or frightened by these people. In this resolve when these private citizens are seen with their guns they are usually intimidated and told to explain their motives therefore get harassed.

When citizens are allowed to carry guns they tend to be violent at times. Short tempered people and those with ill minds tend to use guns inappropriately. Most of them especially the college students who have been allowed to carry guns tend to form small gangs with the aim of intimidating others. They may resolve to do robbery and other evil acts for example rape and bullying at the expense of possessing these weapons. Others who do game hunting may go further to do illegally hunting.

Criminals especially robbers tend to arm themselves if they learn their victims are armed. This usually increases the chances of these innocent citizens being attacked by these robbers. Armed ‘victims’ may signal offenders that there is need to use a strong force because of the need to overpower the victim.

Although there are many disadvantages of allowing citizens to possess guns, the aspect of protecting oneself from attacks is also paramount. Any citizen usually feels secure when he or she has a gun especially when he or she is alone.

In conclusion the use and ownership of guns should be allowed only under restriction. Those given the opportunity to own should be held accountable of the acts using their guns. People who were assigned guns should be trained and advised on the use of these guns. While it’s a personal duty to guarantee one’s safety the government should also be responsible for the safety of every citizen whatever owns a gun or does not.