Aesthetics of Music and Stage Performance as Opposed to Kierkegaard’s

Music is an art that is practiced and appreciated by many in the society. It is practiced by a good number of people and not actually identified with a given social class or race. Aesthetics from a philosophical point deals with nature of art, beauty and taste. It is also associated with the creation and appreciation of beauty. Kierkegaard’s philosophy concerning live music performance and aesthetics has many shortcomings. Music is constituted of several other factors and not aesthetics only. Therefore, it is succinct that live performances and music composition are not in any way related with aesthetics.

Music composition and creativity is all about the mind and the various factors put together to make the whole concept plausible. The typology of music composed depends with the theme and rather the main subject being relayed by it. These factors in the first place determine the energy and nature of the performance of these songs. Stage performance entails a lot being combined, the high mental involvement, the nature of the crowd, say, revelers and the message being conveyed by the song itself concerning the music genre. These are logical mindsets with no lame attributes being assembled to mystify any sober mind thinking in the name of philosophy as we are being made to believe. 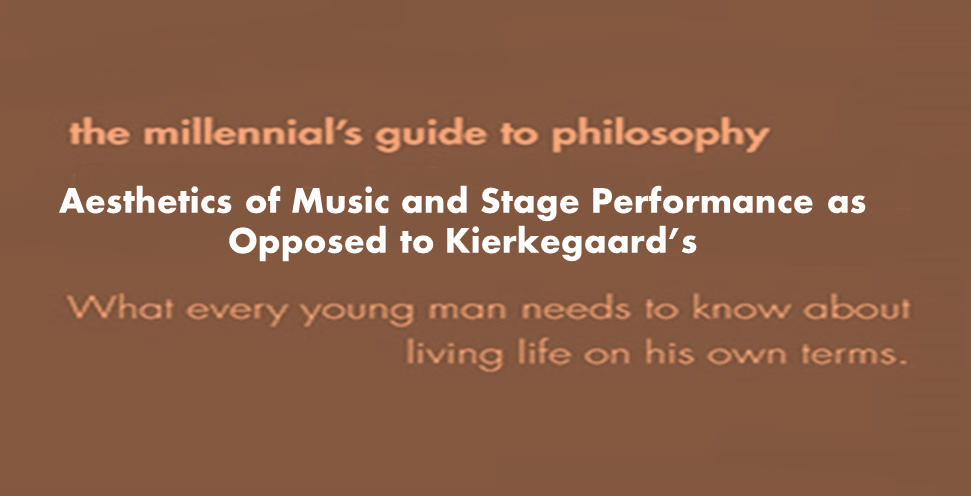 Kierkegaard generally bases his argument on three major perceptions and attributes them to values that are in a way likely to have an impact on live stage performance and composure. These are the aesthetic existence, ethical existence and religious existence in that order. They are all essentially attributed to enjoyment, struggle and victory and suffering respectively. Well, when the entire above are put under deep scrutiny and given a musical and entertainment relevance, they will bring some sense but still leaves unanswered questions to the concerned.

Mary Warnock helps us understand the three spheres that Kierkegaard is putting across and helps us bring out the illusion and the ambiguity in his theories.

The authenticity of Kierkegaard’s thinking is based majorly on the hurdles these artists have to skip in order to be classified as those who never constitute to the extinction of live music performance. This is not usually the case; a good performance is not usually planned for as it naturally comes out given the prevailing circumstances as per my point of view. He is giving the artist too much anticipation and desperation at the same time, if they actually put such aspects into consideration then they can never deliver what their fans expects of them as sometimes it may be too much.

This should not actually be the reason these artists are setting anticlimactic targets that are easily achievable but citing their desperation regarding aesthetic performance can be a bruise on their career in a way. His approach on subjectivity and objectivity on the artist’s side also suffers a cripple as he has collectively conceptualized the whole thing instead of analyzing it on an individual basis. Objective approach is therefore generally an extreme catalyst for exhaustion of the whole concept and only precipitates a negative aesthetic experience.

Generally, Kierkegaard’s philosophy phases a challenge whereby he is trying to analyze and understand all the music genres through the three spheres. Secular music and gospel music are performed differently depending with the artist’s subjective approach towards his deliverance. He is a real thought initiator by coming up with such complex illusions that are barely truthful and making us believe his analysis of Christianity and stage performance.

The philosopher also failed to highlight his strong views and opinion on the role of women in live musical performance and the general entertainment when it comes to that. Women cannot be sidelined when it comes to the nature and beauty of this whole art; they add some appeal and give it some sense of belonging. Any lively stage performance is associated with levitating females especially if it’s secular, this generally boosts the crowd’ energy and that of the artist as well. Therefore, when it comes to struggles and victory, this is one of the things that constitute them.

It is also interesting to know that whatever one feels when listening to a given music may not be mutual with the party they are with at the same time. Music genres and any other music category tends to be associated with a particular group of persons, that is why music comes in with esoteric psychology and therefore the poignancy might not be related. Therefore, these feelings evoked by whatever we listen to are never the same and so our opinions and views concerning live stage performance will always differ. In addition, I strongly believe that there is no social scale of measuring this whole concept or rather no identified brain to determine a performance unless it was generally whack.

The music environment also plays a major role in this whole concept. It is mainly associated with the age of the concerned parties and nurturing musical literacy. It therefore inspires the type of music that is listened to and the subjective way of delivery. If this were given an objective approach, it would definitely result to a pathetic fail, as you should make the people and the environment your subject. This is on the contrary to the gospel Kierkegaard is preaching in his illusion spheres. The music environment should be a matter of concern to any aspect of performance because it assists in the rhythmic development especially when kids are involved.

When it comes to achieving aesthetic stage and live performance, music representation must be given a damn. The manner in which the artist stages his performance counts a lot and points a mark to the general outcome of what is expected of him. The aesthetic importance of musical contribution is considered by factors such as the pictorials, general musical semantics as analyzed by the American philosopher Nelson Goodman and other dramatic stage aspects. How the picture grid and the art is portrayed in the pictorials in a given clip depending with how the caricature is typified adds something on the product of the performance. These are among the major things that one Mr. Kierkegaard failed to highlight in his entire work hence raising eyebrows.

Music can also be viewed as a philosophy whereby we tend to link it to poetry and put in the philosophical discourse that brings in the reality. With this, the nature of its composition and the real touch that is brought out is based on culture and maybe touches on the real life of a given society or community. It fundamentally and explicitly tags a claim that music in a give way provides a main feature of existence into the reality. With such in mind, it is definitely not implausible to cite that it will have an even tremendous effect on the live stage performance when the artist is delegating his duty. This is just one of the many important that we lacked in the prior argument concerning Kierkegaard’s work.

The other necessary factor that missed out in that particular work comes in where Sonnet Kierkegaard failed to explicate something on performance and obligation. The nature of a performance that is got from san artist is not only determined by the factors he was cited, that is aesthetics, ethics and religion. Factors such as energy find their way in, positive energy, motivation from the event organizers and other general social factors. These might include the general security in which the event is taking place, due payments must also be given a concern. Nelson Goodman says that a true definition of a performance involves the artist idea of being aware of usual practice. This will enable the artist to consider the expected contemporary matters such as self-obligation. This also involves the musical literacy in consideration with the genres and giving an absolutely competent performance much to the chagrin of many.

Music popularity and intolerance also points a mark. This has been clouded by contradictory stereotypes and various perceptions that majorly negate the actual performance of an upcoming artist or may an unpopular artist. Music more like sets our culture, determines the societal moral behavior and etiquette. This has seen music classes develop some horrific and unwanted injustices from production to the general stage output. The end result precipitated by these all is music being the obvious culprit of intolerance due to the number of people immersed in this particular art. This has seen the distinction in aesthetic sense drastically take course to being blurred in educational setting.

The song and music drama also crops up a serious debate that in long run pulls out a significant difference in aesthetic aspect, which is so much a concern to us. Song is generally common to human culture that has music of any kind. There are debatable moments in which songs can be said to be fundamental music, natural music and also the most expensive of them all. This usually depends with what has been put in place to categorize the said song into a classified genre that will eventually alter its performance. Gospel hymns are identified with humility while hip-hop and anything related is identified with a lot of energy, bravado and some kind of unapologetic braggadocio. These transitions from songs to music are what actually bring out the difference when it comes to live performance. This will determine the degree of aesthetic appeal on the outcome. We are also aware that Kierkegaard failed to highlight or rather have them based on his arguments.

History also gives a cake bite on this diverse and much debated aspect, the Aesthetics of music, professor Sparshott argues on the evolution of this particular culture and how the societal practices affects the deliverance an general stage performance in this art. History plays a major role especially when something concerning the people’s culture is a major future on the said song. Kierkegaard failed to consider this to back up his argument to make it so concrete and convince us that his research and final work was worth the hype.

In conclusion, we realize that there is factual information and opinionated information. The entire argument and debate regarding Kierkegaard’s philosophy of the aesthetic stage of existence and live musical performance is just a case study of opinions versus facts.

We realize that he gave objectivity a major concern over subjectivity on the contrary to what should be done by the artists immersed in this musical art. Objectivity results to an epic fail when so much upon insinuated. His opinions were so much related to human facts and others believed the authenticity of his thinking until Mary Warnock challenged his whole work.

Basically, aesthetic performance requires mental involvement with real facts and not illusions as Kierkegaard made us believe so much. I therefore defer with his whole concept of stage performance. He combined religion, ethics and aesthetics in his whole analysis and did use the plural ‘we’ for everybody and not ‘I’ for a personal opinion or maybe for an individual reference. I actually expected a diversified argument based on this because we have different music genres, which are either secular or gospel.

All these songs have different cultures and different expectations from their various audiences regardless of the process used to give the final product. I therefore strongly believe that music representation, music history, popularity and intolerance, music and song drama constitutes to be the better determinants of aesthetics and live stage performance as opposed to Kierkegaard’s three spheres.