The book The Adventures of Huckleberry Finn by Mark Twain, there are different themes that Mark Twain tries to bring out that can be found when one keenly goes through the light-hearted and youthful adventure story. Although the novel was written several years after slavery had already been banned in America, the book is set several decades earlier when slavery and racism was still a troubling fact. When one views the book from a different perspective, the writer is simply trying to give out a picture about the conditions of racism and slavery during the period. At the end of the civil war, there was hope that racism wouldn’t be as strained as it was during the war. However, in the novel Twain still depicts the picture of just hope bad the black people still had it during because of the difference in their skin color.

Slavery could have easily been done away with but when the white people living in the south decide to enact laws using the excuse of their safety against the new free black slaves the black people view this as immoral and discriminatory and even opt to act on it. Even though the time setting of the novel was when slavery had already been abolished, the black people living in the South of the state dint have it any easy being black and Twain sets his novel a few decades back to give the readers a clear honest picture of the nature of racism and slavery at the time. 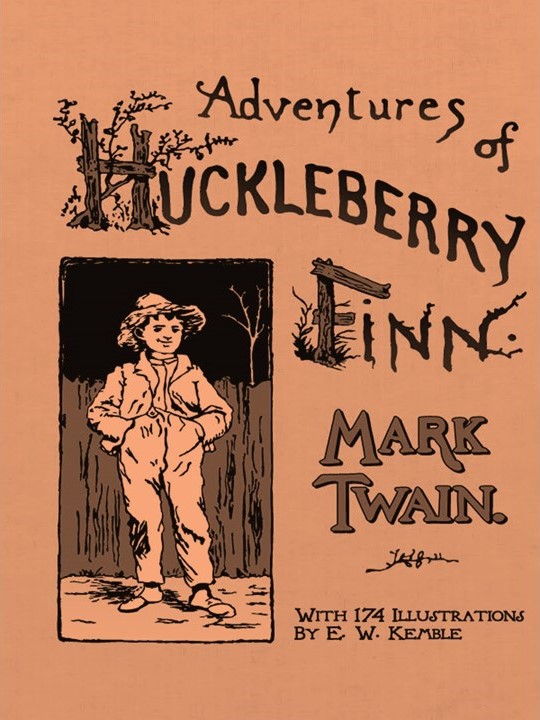 The book is set in the late 19th century in a rural part of the state along the Mississippi river where the main dominants in the society are the white people who look down at the African American living in the area and treat them with a lot of cruelty and discrimination. The main character in the story is Jim Crow who Twain uses a representation of the African American race (Twain, 13). Jim, who was owned by a white lady known as Miss Watson is trying to flee in order to try and avoid being sold to another owner and risk being permanently separated from his family.The other character in the novel is Huck who is trying to run away from the oppression he gets from his father. The two set off on an adventure towards the north where seemingly slavery had already been banned.

Throughout the book, Twain tries to bring out the social views on racism by using the two characters Huck and Jim. Huck being white seems to be a threat to Jim considering that at any point he may opt to turn Jim in and sell him as a slave. Despite the tight family bond that the two create Jim doesn’t feel as an equal to Huck and more often than not views Huck as a threat to his freedom. This is the reason behind Jim always agreeing with Huck’s ideas of adventure despite any good reason that he may have.

Twain portrays Huck as ignorant to the “rules of the society”. Unlike other white men, to him Jim is an equal and a brother and he looks past Jim’s skin color and although more often than once he uses the word “nigger” to refer to Jim, he does it on a lighter note. He sees Jim as a friend and a companion not just a black man who is at his disposal to tend to his every need. This is in spite of the fact he was raised in a white household where the blacks were seen as nothing more than slaves and servants to the white people. The influence that Huck’s upbringing may have on his judgment seems to be apparent when he is filled with a sense of guilt every time he is forced to lie to the white men who ask whether he is hiding any runaway slaves. However, the guilt does not shake off Huck’s loyalty to his friend Jim and at no point does he give in and sell him out to the white men.

Racism becomes even more obvious when Huck approaches Sally about the steamboat explosion. The minute that Huck points out that one of the victims who died in the explosions was a black man; Sally Phelps bluntly states that, “This proves that blacks were not considered on the same level as human beings. Their lives were obviously not valued and therefore disposable. They were merely replaceable figures” (Twain, 150). This further proves the level of cruelty that the African Americans are forced to live with simply because of the fact that they are black.

Mark Twain does a superb job in bringing out the differences of the lives and hard times that the black people had to endure during the 19Th century never being treated as equals of the white people. Additionally, the writer does a great job in making people realize that racism does not only affect the oppressed, but also the oppressors.

Advantages and Disadvantages of Telenursing

Foreign Policy of the United States and Relations with China