Advantages and Disadvantages of Free Trade

The dominance of capitalism has become undisputed as other economic systems that once challenged it has seemingly failed to prove themselves as viable and as having the capability of boosting the development of any nation.  Characteristic of the capitalist economic system is the adherence of to the principles of free trade.  By free trade, states reduce, if not abolish, all restrictions on capital and the exchange of goods.  Traders from different countries no longer have to deal with the obstacles that are usually established by governments meant to discourage the entry of too many imported products and capital. It is also because of free trade that multilateral organizations such as the World Trade Organization, North American Free Trade Agreement, and Asia-Pacific Economic Cooperation were formed.  Generally, the aim of these formations is to reduce tariffs and to abolish these ultimately in order to remove barriers to free trade. Globalization itself is a result of the concept of free trade.  The objective of globalization is to remove national borders and to have a world economy that is governed not by states but by the abstract laws of the market.

However, free trade has been found to have serious flaws too.  It may have advantages but its disadvantages are also just as significant.  Because of this, the debate on whether it is really good or bad to the economy of a country has been brought to the fore.  One camp insists that free trade brings about economic development that would benefit society while the other asserts that it leads to more serious social inequalities and unfair trading practices.  In order to determine whether it is really beneficial or not, it would be necessary to discuss the advantages and the disadvantages of free trade.  By doing so, one can weigh the pros and cons and come up with a conclusion as to whether free trade is generally positive or negative. 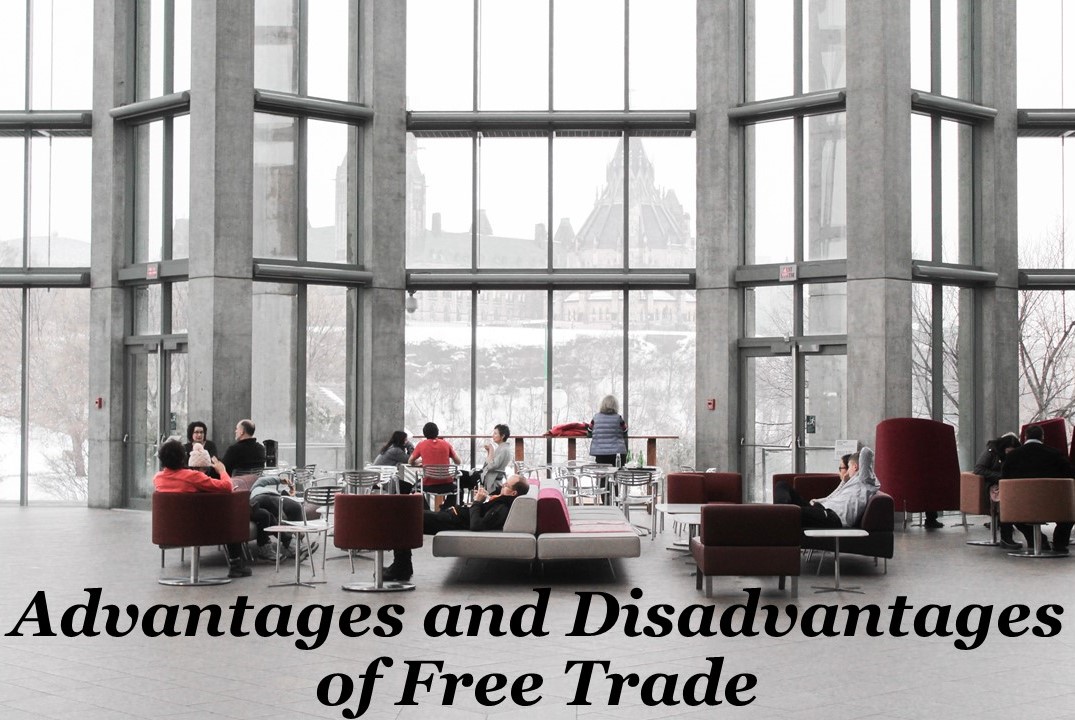 The Advantages of Free Trade

One of the very first questions that are often posed about the benefit of free trade is the increase in production.  In order for a country to trade with others, it is compelled to heighten its production of commodities in which it is specialising in.  The premise here is that every country has a comparative advantage. David Ricardo explains that “a nation was said to possess comparative advantage in those products for which its labour was relatively productive” (Yoffie 1993: 4).  If a country has to exchange goods with another it would be compelled to increase its production to equalize the trade.  Certain advantages and benefits of free trade will continue through the increase in production.

Whatever a country might have a comparative advantage would be lost if production were inefficient. Of course, one that is not involved in international trade would be less inspired to improve the efficiency of its production.  In a world with a free market system though, competition among the traders inevitably becomes intense.  This rivalry would therefore not only enable manufacturers or suppliers to improve the quality of their products, but also increase the efficiency of their production.  Through better efficiency, more could be produced and less wastage is achieved.   If the commodities produced by a particular country are of better quality than those of its competitors, these would gain the advantage in the market.  This is obviously good for the economy of the said nation. Improving production efficiency would also prompt technological advances.  Apparently, it is only through automation that many types of commodities can be produced in large quantities while raising the level of its quality. With the manufacture of more machines and devices in support of automation, production or the creation of value by a society consequently increases.

The two aforementioned free trade advantages lay the foundation for the following other advantages. Free trade helps producers and investors in a country that is active in it.  The premise is that local producers, whether industrial or agricultural, which supply the domestic market are compelled to increase the quality of their commodities while, at the same time, making sure that these are priced competitively.  Free trade means the entry of foreign competition and if the local producers continue to come up with low-quality and unreasonably priced commodities, they could lose to the imported products.  Aside from, tariff reduction would also make the imported products cheaper.  Obviously, all these effects benefit much the consumers.

Free trade may bring about changes in the characteristic of a country’s manufacturing and agricultural sector. In order to trade with other countries, it is necessary to refocus both sectors to the production of goods that are in demand internationally.  At the same time, the influx of imported commodities may also reduce the viability of both if they are also producing similar ones. To some extent, closures may occur but the temporary loss of employment can be resolved by the rise of more export-oriented industrial and agricultural establishments. The premise, therefore, in free trade is that employment would slump very temporarily but would increase many times once a country has shifted its focus to export-oriented production.

If a country practices a closed-door or protectionist economic policy, it would have difficulties in increasing its foreign currency reserves.  This is because the almost all its production are focused on the domestic market.  This would naturally render it incapable of purchasing imported products. Through free trade, a country acquires more foreign currency that it could use to buy commodities that it does nor produce domestically. The prevalent means of international exchange is the U.S. dollar. By increasing the quantity of its exports, a country would generate reserve dollars that it could use to import the commodities that it needs.  To sum up all the advantages of free trade which have been pointed out, the premise is that a country would enjoy economic growth if it is involved in the world free market system.  There would be higher production, primarily for export, which would generate employment, result in consumer satisfaction, and increase in foreign exchange earnings.

Free trade however has its disadvantages too. The critics of globalization are the ones who are most articulate in pointing out how unrestrained international trade can instead render economies bankrupt instead of developing as promised.  Trade liberalisation is an economic policy that is an offshoot of the principles of free trade. It is also the target of criticisms because of the toll that it takes on the local producers.  Due to the immediate impact of free trade policies on the labour and farming sector, as well as the small and medium-sized domestic producers that cater to the local market, the voices of opposition mostly come from them.

Upon the removal of trade barriers, there would be large volumes of imported products that would flood the local market.  This would naturally affect the local manufacturers who happen to be producing similar commodities.  As have been shown by the experiences of many developing and underdeveloped countries, the local industries could barely survive the situation.  As a result, many of these have closed down. There were a few that successfully diverted to the production of export commodities.  Others, however, became mere local dealers of imported products similar to those they were actually manufacturing before. Still, others have completely become bankrupt.  It is not the local capitalists or business owners that are seriously hurt by this situation though.  It is the great number of workers that are displaced in the process.

Free trade encourages the economy not just to become too oriented to export but also for it to be import-dependent.  This is potentially dangerous for the welfare of a country and its people.  When a country that once produces its own food becomes a heavily dependent on imports, it is virtually letting foreigners control of its economy.  Anytime that importers increase the prices of such commodities, a crisis could occur in the said country.  For the past few decades, the world has seen how volatile the international market is.  Due to free trade, a crisis in one major global economic player could wreak havoc on other countries, especially the developing ones.  There have been cases when the prices of exports fall because of the sharp decrease in demand or because of a newly discovered alternative product or source.  When this happens, a country that has focused much on a particular export product because it is considered as its comparative advantage could experience recession.

Competition becomes very intense because of free trade.  Due to this, it is very likely that companies that have only been established become less viable and may close or be taken over by the established bigger corporations that may come from a foreign and more developed country.  The competition may also prompt businesses to seek ways in reducing the cost of production even if it compromises the welfare of the workers, the environment, and the people in general.

Finally, free trade does not necessarily mean fair trade.  The reality is that the international economic playing field is no longer level.  There are highly industrialized countries that have the capability of dumping high value-added commodities on the developing and underdeveloped nations.  The developing and underdeveloped nations for its part could only exchange these with semi-processed products or raw materials which are of low-value.  The exchange therefore is unequal and the result would be deficits in the balance of trade.