What are The Advantages and Benefits of Stem Cell Research

Stem cells are unspecialized cells which are capable of self-renewal and also of differentiation into specialized cells. Stem cell research holds the promise of making an unmatched contribution towards tissue transplants, replacement of aging or damaged tissue, gene therapy and effective drug testing. The advantages and benefits of Stem Cell Research far outweigh any potential disadvantages.

The Advantages and Benefits of Stem Cell Research

Stem cell research is one of the most controversial topics in contemporary medical and ethical debate. Stem cells are unspecialized cells which are capable of self-renewal and also of differentiation into specialized cells. These cells constitute an internal repair system, dividing limitlessly to replace damaged and worn-out cells as long as there is life. There are three types of stem cells. Embryonic stem cells (ESCs) are derived from the embryo and are pluripotent: they have the potential to become all the different cell types of the body. Adult or somatic stem cells are found in organs or tissues and are multipotent: they can distinguish the specific kinds of cells that comprise that specific organ or tissue and are essential for organ or tissue maintenance and repair. Induced pluripotent stem cells (iPSCs) are genetically reprogrammed adult cells to an embryonic stem cell-like state. The dual ability of stem cells for self-renewal and differentiation into specific cell and tissue kinds provides excellent potential for regenerating faulty body components and curing illnesses that have so far defied drug-based therapy (NIH, 2002). Advocates of stem cell research consider it to be mankind’s greatest hope of survival. At the other end of the spectrum are the detractors, who paint a doomsday scenario of “a new world of “embryo farms” and “cloning mills” for the cultivation of human spare parts” (Weiss, n.d.). The benefits of stem cell research far outweigh any potential disadvantages. Stem cell research holds the promise of making an unmatched contribution towards tissue transplants, replacement of aging or damaged tissue, gene therapy and effective drug testing.

Adult stem cells are used in bone marrow transplants. Bone marrow contains blood-forming stem cells (hematopoietic stem cells) that have been used for over four decades to treat blood cancers and other inherited blood disorders. Bone marrow transplants are able to permanently replace a patient’s diseased blood system and give the patient a new lease on life. Persons who have diseases of the bone marrow are injected with healthy hematopoietic stem cells that produce healthy blood cells, and replace the function of their own non-functioning bone marrow (NIH, 2002).  Umbilical cord blood, which is harvested from the umbilical cord of the baby after birth, is another source of hematopoietic stem cells that is being used in treatment. Cord blood is rich in a kind of stem cell that gives rise to oxygen-carrying red blood cells, disease-fighting white blood cells, and other parts of the blood and immune systems (Weiss, n.d.). The benefit of cord blood cells is that these stem cells can be frozen (‘ cryopreserved ‘) in cell banks and subsequently used to treat kids with cancerous blood disorders such as leukaemia and genetic blood diseases such as Fanconi anaemia. Another advantage of cord blood transplants is that they are less likely than conventional bone marrow transplants to be rejected by the immune system, or to result in a negative reaction such as Graft versus Host Disease. (EuroStemCell, 2013). Unlike conventional blood transfusions, which provide only temporary volumes of cells which die in a few months and have to be replaced yet again, the stem cells found in bone marrow and cord blood can generate fresh blood and immune cells for a lifetime (Weiss, n.d.). More advanced techniques for collecting, or “harvesting,” hematopoietic stem cells are now used in order to treat leukemia, lymphoma, multiple myeloma, non-Hodgkin myeloma and several other blood disorders. Stem cells are used in the treatment of several diseases. 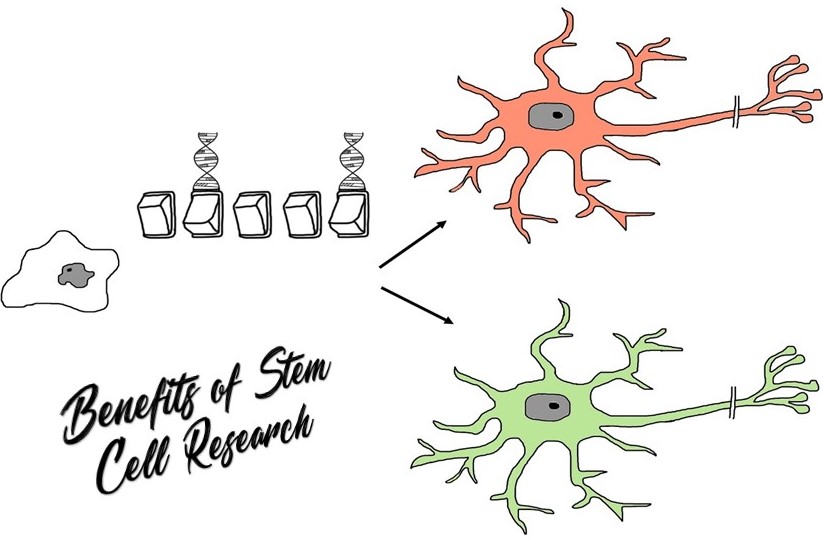 The replacement of aging or damaged tissue is one of the most promising potentials of stem cell research. Healthy stem cells can replace damaged cells in an adult. The National Institutes of Health indicates that approximately 1.1 million Americans suffer a heart attack each year, with over half a million fatalities. Adult mesenchymal stem cells hold the promise of new ways to repair damaged cardiovascular muscle cells and arteries after a heart attack. These cells are found in the bone marrow and are responsible for bone and cartilage repair and in supporting blood stem cells. They also produce fat cells. Research gives promise of potential treatments for repairing bone or cartilage and the repair of lung tissue in patients with chronic obstructive pulmonary disease (COPD). Stem cell research is actively testing the potential of mesenchymal stem cells in protecting pancreatic beta islet cells in adults and children with newly diagnosed type 1 diabetes, by adding healthy pancreatic cells that produce insulin. Human spinal cord stem cells are undergoing clinical trial testing in the treatment of Amyotrophic Lateral Sclerosis (ALS), also known as Lou Gehrig ’s disease. Mesenchymal stem cells might also replace damaged nerve cells in Alzheimer’s disease and spinal cord injury, provide healthy new skin tissue in the case of burn victims and add nerve cells that secrete dopamine in Parkinson’s disease. Adult eye stem cells are being tested as to their efficacy in repairing corneal damage. (NIH, 2012).

Stem cells can also be used to screen fresh drugs and toxins and to understand birth defects without toxins and drugs being subjected to human volunteers. In the early stages of drug screening, living cell cultures are used to test the effectiveness and safety of new drug compounds. Compounds that work best on cells are then tested in research animals, and finally in clinical trials with human patients. One of the great promises of embryonic stem cell research is that these cells might be used to create very specific cell cultures for the initial stages of drug testing. These stem cells develop into the tissue targeted for testing and are subjected to drugs. For example, embryonic stem cells could generate human brain cells that show the effects of Alzheimer’s disease. Researchers could then screen millions of potential drugs against this more realistic cellular model and identify the most effective compounds. These compounds could then be tested on animals and humans. The speed and accuracy of drug screening would be improved by the use of real human cells that mimic diseases. Safety of clinical testing could be vastly improved. (University of Michigan web site, 2012).

Another treatment possibility is to use stem cells in gene therapy. Stem cell research will help us understand inherited diseases by allowing us to study human cells bearing the exact genetic defects that cause disease in patients. Stem cells could find use as vectors (a tool used to deliver genetic information between cells) where they serve as the agents used to transfer genetic material from one cell to another. For example, hematopoietic stem cells could theoretically be genetically altered to make them resistant to HIV and AIDS and then inserted into a person who has HIV or AIDS. The genetically altered cells may take on the function of healthy cells thereby helping the person with HIV or AIDS fight off infection and illness. (University of Minnesota Center for Bioethics, n. d.). In essence, human embryonic stem cells may be genetically manipulated to treat human patients with immunodeficiency or other illnesses that can be fixed by cell transplantation. Embryonic stem cells may also be indirectly beneficial for cellular gene therapy, by providing a constant in vitro source of cellular material for cellular based gene therapy. Haematopoietic stem cells are loaded with replacement genes to take the place of defective genes and released into the blood stream of the patient. These engineered stem cells correct defective cells in the nervous system by supplying the normal version of the defective gene. The stem cells also reproduce to form new blood cells that reinforce their effect. Stem cell gene therapy shows great promise in immune system dysfunction and neurodegenerative diseases (NIH, 2009).

In spite of the infinite potential advantages and benefits of Stem Cell Research, it is bogged down by ethical controversies. The issue with rouses most opposition is the use of embryonic stem cells. Opponents of stem cell research hold that embryos are human individuals and should not be used or destroyed for research purposes. This position is unsound. During in vitro fertilization, a large number of embryos are created to ensure that at least one succeeds. The unneeded embryos are destroyed or given for research with the parents’ consent.  Stem cell research is largely based on the use of embryos which have already been destroyed or on embryos which are left over from in vitro fertilization procedures and are destined to be discarded.  There are currently more than 200,000 “excess embryos” frozen in fertility centers around the United States. (University of Minnesota’s Center for Bioethics, n. d.). The use of left over embryos from assisted reproduction treatments for stem cell research is amply justified in the scientific quest to alleviate human suffering.  A second argument raised by opponents of stem cell research is that it may be the ‘slippery slope’ which leads to human cloning. This again is fallacious reasoning, as the therapeutic cloning used in stem cell research is a laboratory process to create embryonic stem cell lines and is completely different from the reproductive cloning in which a cloned product is implanted into a uterus to generate a pregnancy.

Stem cell research is mankind’s hope for the future. It is the new frontier of medical research and has the potential for under-standing disease development and progression, for regenerative medicine, and for targeted drug development. It is a part of the quest for new knowledge which has always characterized mankind and makes him the master of the universe. Stem cell research is one of the most powerful tools available to Science in its effort to combat human suffering and enhance the quality of life. The need of the hour is accelerated stem cell research conducted under the well-defined ethical boundaries. The advantages and benefits of Stem Cell Research are so evident that all arguments against it are bound to fail. No power can arrest the inevitable progress of this science which promises to create a better world for all.

Pros and Cons of American Capitalism